The Rhetoric of Live Tweeting 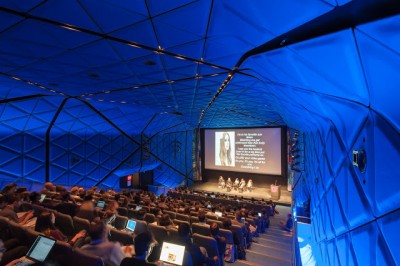 Live tweeting is an art. Anyone can do it, but doing it well requires a serious skillset. Keeping up with the ongoing conversation, making valuable contributions, engaging with other people, keeping all your hashtags and usernames organized, all while somehow paying attention to the meatspace event that prompted the live tweeting in the first place… it’s a lot. On the heels of two conferences (Society for Cinema and Media Studies and Theorizing the Web) and a long (oh so long) presidential debate season, I’ve been thinking a lot about live tweeting as a particular form of rhetorical address. Here, I offer a rhetorical model for understanding live tweeting as a social phenomenon.

Rhetoric is one of the oldest academic fields of study. In the 4th Century BC, Aristotle wrote and taught extensively on rhetoric as the ability to see the “available means of persuasion” in a given address. That definition has remained remarkably stable over the millennia, and today rhetoric offers a variety of heuristics for constructing and critiquing rhetorical addresses and their ability to move people to action. Speaker, audience, social context, and the goals of an address are all factors in determining rhetorical tactics and effects; appeals to emotion, logic, patriotism, authority, and other factors can be analyzed using a rhetorical framework.

So how does understanding live tweeting as a rhetorical address shape the way we might both analyze and enact this new (relative to Aristotle anyway) mode of discourse? I think that, rather than an Aristotelian approach to rhetoric, the work of Kenneth Burke is helpful.

Kenneth Burke, a prolific writer and literary critic of the 20th century who significantly influenced the rhetorical tradition, reframed rhetoric in terms of identification rather than persuasion. Rhetors use the means of persuasion to make the audience identify with the speaker. This process is most obvious in addresses such as political advertisements and stump speeches in which politicians appeal to “ordinary people”: the single mom, the minimum wage worker, and the college graduate drowning in debt.

Live tweeters attempt to foster identification in a variety of ways. The hashtag itself is a tool of identification. It alerts the audience that you are part of the same conversation, that you are observing—or, in many cases, not observing but interested in—the same topic or event. We use the hashtag to organize and place ourselves in a particular conversation. Hashtags might be seen as a tool for stabilizing what Burke called the “unending conversation.” He writes:

Imagine that you enter a parlor. You come late. When you arrive, others have long preceded you, and they are engaged in a heated discussion, a discussion too heated for them to pause and tell you exactly what it is about. In fact, the discussion had already begun long before any of them got there, so that no one present is qualified to retrace for you all the steps that had gone before. You listen for a while, until you decide that you have caught the tenor of the argument; then you put in your oar. Someone answers; you answer him; another comes to your defense; another aligns himself against you, to either the embarrassment or gratification of your opponent, depending upon the quality of your ally’s assistance. However, the discussion is interminable. The hour grows late, you must depart. And you do depart, with the discussion still vigorously in progress.

Conference live tweeting is, in some ways, a different animal from other live tweeted events such as presidential debates. Each contribution to the conversation takes a particular audience into account, and serves a certain purpose. After going to both Society for Cinema and Media Studies and Theorizing the Web, I’ve noticed four major types of conference live tweets: 1) summary of a point for the immediate conference audience, 2) summary for an audience that extends beyond the conference, 3) commentary or response to something intended for the immediate audience, and 4) commentary that extends beyond the immediate audience.

For example, some live tweets reiterate or quote something from a specific presentation in such a way that only people immediately present for that presentation will understand. For example: “And that’s when I realized I wasn’t in Kansas anymore.” -@generic_username. If you aren’t in that room, watching that presentation, you have no idea what this refers to. And that’s because it isn’t for you. It’s for the other people in that room. It’s like highlighting a passage in a book.

The other types of tweets are pretty straightforward; maybe you’re summarizing a presenter for the folks at home who are following the hashtag, maybe you’re cracking a joke that only fellow audience members will get, or maybe you’re adding to someone’s point in a way that will make sense to people regardless of whether or not they are there with you. But the address that interests me the most is that first variety. After all, what purpose does it serve to summarize a point for an audience that heard the same thing? And, even more interesting, why are those tweets so popular? What are you doing when you like or retweet something that simply reiterates a point for a narrow audience?

You’re identifying. You’re demonstrating your understanding of this moment in the unending conversation, and you’re asking the rest of the audience to recognize that this point is important or interesting. You’re taking the reigns as rhetor, and addressing an audience in such a way that recognizes your common experience. And when you like or retweet that address, you’re confirming the identification. “Yes, I too heard that. I also think it is important.” The like or retweet quantifies the success of the address.

Live tweeting is one part self-promotion, one part community service. Each tweet promotes yourself to a particular audience, and performs a service for a particular audience. It either insulates the conversation, keeping it inside the realm of the meatspace experience, or it extends the conversation and invites others in. Tweeters make decisions about who they’re talking to, not only during an event like a conference but also in our day-to-day lives.