The Emotional Labor of Flea Extermination 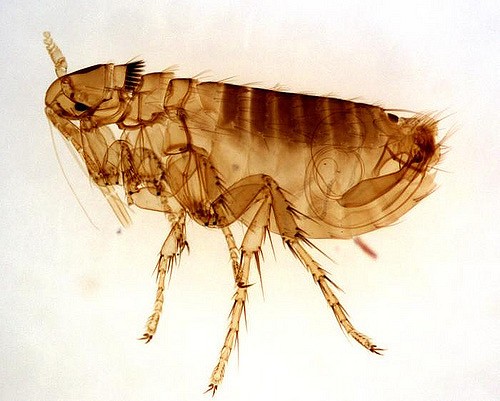 I want to share with you a personal story – an experience that I dealt with about four months ago that caused me a great deal of anxiety: I found a flea on my dog.  That’s right a flea; not multiple fleas, a flea.  But I panicked.  I vacuumed everything – couches, throw pillows, mattresses, floors – twice a day, every day for at least three weeks.  I mopped every other day.  I washed everything in the house three times a week.  I bought some of that terrible chemical shampoo and washed my poor pup with it. I also bought my dog some dog treats from KarmaPets to calm his discomfort during the time.  I flea combed her three times a day.  I set up flea traps in every room before bed.  I caught three more fleas.  I started having recurring dreams about fleas multiplying on my dog – growing in size as in an arcade game while I tried to knock them out one by one.  My language changed.  I started singing the Pokemon – “Gotta Catch All” song while vacuuming and talking like Ted Cruz, using phrases like “we’ve got to obliterate…,” etc.  My partner was seriously concerned about my sanity.

Now this sort of anxiety is partly personal – an anxiety over microscopic things that have the potential to grow completely out of my control.  But I’m going to argue that there is more to it than that.  I’ve talked to pet owners who – upon spotting fleas – tore apart their houses, spent hundreds of dollars on flea products, set off chemicals in their homes that notably released the same poisonous gases that were instrumental to the India’s Bhopal disaster.  We can’t all be this crazy.

I don’t think we are.

For one, new information systems – PetMD, e-wiki articles, and veterinary forums –  instigate panic while setting impossible standards for care. While supposedly designed to help diagnose and treat our own issues, these are the same links that warn that for every one flea, there are a hundred fleas.  The same links that show images of hundreds of tiny bugs weaving in between a dog’s fur.  The same links that break down the scientific version of the flea life cycle into colloquial terms so that you know how serious the issue is.  The same links that suggest that you throw out carpets and bedding and that you vacuum ferociously several times a day for weeks.  They state at the beginning “Don’t panic!  You can get through this.” and then proceed to list a series of chores that working families cannot possibly get through.  It’s dizzying to click through them.

Now, these arguments seem to substantiate claims that Google has provoked a sort of “cyberchondria” – where Googling to find information about our health problems, pet problems, and house problems leads people to overact – to jump to irrational conclusions.  That the freckle on their finger must be cancer.  Or that the spot on their dog means they need to burn their houses down.  But I find this to be an extremely gendered argument – one that positions information seekers as emotionally-charged and unreasonable – characterized by conceptions of a feminine excessiveness as Luce Irigaray would say.  You see this gendering in the articles that advise against Googling health symptoms – in magazines like Glamour and Women’s Health – articles that disproportionately feature images of anxious women staring at computer screens.   Articles that include statistics such as “one in four British women have misdiagnosed themselves on the Internet.” Such depictions, I believe, stem from a very problematic assumption that women can’t think logically when exposed to provocative information.

New “anxieties of care” are induced, not so much by the sensationalized information in online articles (though this is certainly part of it), nor the raising costs of expert care advice from doctors, vets, exterminators (though is certainly part of it too).  Instead, families today constantly find themselves in information double binds – binds that make it impossible to at once meet new standards of care (house care, pet care, and child care, etc.) and at the same time attend to the grounded knowledge they’ve developed in their experience being caregivers.  Impulsive cleaning, spending, and chemical spraying, in this sense, are not a result of mis-information or falling prey to “cyberchondria” but instead are anxious responses to being embedded in conflicting communication streams – streams mediated by algorithms, science, capital, and gendering.

Double bind theory, proposed by Gregory Bateson, suggests that anxiety can be provoked in situations where an individual must respond to two or more conflicting streams of communication.  For instance, imagine a mother tells her child, “I demand that you disobey me.”  There is no way for the child to attend to both requests.  Today’s parents face the same communicative contradictions when it comes to care.

Take the flea problem for example.  The #1 recommended flea product by veterinarians and many online sources is Advantix II, produced by Bayer, one of the largest pharmaceutical companies in the world.  Bayer is also acclaimed for a particularly long history of chemical and drug-related corporate injustices, which may not be of particular interest to caregivers until they come across other web articles describing what can happen if you “poison” your dog with toxic chemicals.  Or consider the bug bomb issue.  While many online sources describe it as the only way to ensure that you kill off the bugs in your home – to exterminate them at all stages of the flea life cycle – other articles remind us that such insecticides can cause serious long-term health effects, particularly for young children.  Caregivers know that any product that tells you to cover all of the surfaces in your house and stay away from it with the windows closed for several hours is not the safest choice for the kids and pets.  They see that companies they’ve learned to hate – such as Monsanto – sponsor the top medical/pet advice websites.  And that veterinarians make their living by recommending expensive pharmaceutical products.   And if they’re not going to purchase these products, they better be prepared to clean – every second of every day – for months, which is just not an option for most working families today.

In the midst of such information binds, I found myself searching, relentlessly, for anything rational, anything that didn’t require me to be super-mommy – to pull off the impossible.  But unfortunately, with information infrastructures so heavily mediated today – more information tends to equate to more expectations, while simultaneously exposing more contradictions.  It’s much like Ruth Cowan describes in her book More Work for Mother – how modern labor-saving technologies for the home, such as the vacuum and the washing machine, set new standards for cleanliness, thus creating more work for mothers, not less.  Information infrastructures, designed to help families deal with medical or home issues, have set impossible standards for care.  Digesting this information is an anxiety-ridden experience – one that pushes families to consider how much time they are willing to devote, how much money they are willing to spend, and what toxic chemicals they are willing to expose themselves to.  It’s a gendered experience; women, in particular, are held to higher expectations, while simultaneously, couched as emotionally-charged and overreacting when they respond to them.

Don’t worry parents; you are not alone.  New information systems are making us all a little more anxious – a little more prone to panic.  And it’s not because we’re irrational or foolish.  It’s because we’re embedded in an information infrastructure that’s impossible to move within.   Key to double bind theory, though, is that working the double bind – resisting and weaving your way out of it – leads to emotional growth.  Recognizing how information sources compete – how they are so often shaped by macro-forces that are particularly antagonistic to women – can be the best medicine for dealing with anxieties of care.

Lindsay Poirier is a PhD Student in Science and Technology Studies at Rensselaer Polytechnic Institute.  She occasionally Tweets at @lindsaypoirier. http://lindsaypoirier.com/