Distance as Authentic: Modernist Tropes of an Amish Woman on the Internet 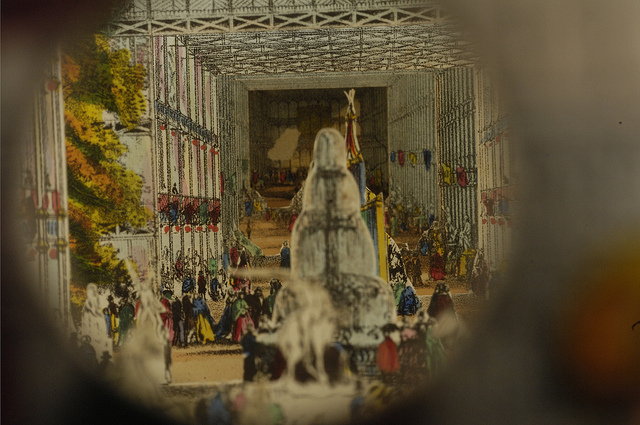 A recent Atlantic article introduced readers to Emma, a 28 year old woman who lives in a Dallas suburb, wears brightly colored blouses, sports a ‘blinged out’ case for her iPhone 6, and even met her boyfriend on the dating website, Plenty of Fish.  She also grew up without light bulbs and by age 18 had, just an 8th grade education.  Emma, you see, grew up in an Amish community near Eagleville, Missouri and left her German-speaking religious community at the age when American youth acquire the right to vote, telling her parents in a note that she was “sorry to do this…but I need to try a different life.”  Her story is the topic of an interview conducted by Olga Khazan titled, Escaping the Amish for a Connected World, a piece that uses Emma’s status as an Amish outsider to offer “a fresh perspective on how our lives have changed since the digital revolution- for the better, and for the worse.”

While Emma’s personal story is compelling, the perspective offered by Khazan in The Atlantic is anything but fresh. Instead, Khazan falls squarely into the modernist trope of constructing and critiquing contemporary identity through analyses of a “traditional” subject. Several quotes, not to mention the headline, tagline, and header image from the article, demonstrate this modernist trope in action.  To begin, detailing Emma’s upbringing in an Amish community conjures for the average reader images of a traditional, pastoral lifestyle that is distinctly outside the contemporary scene.  Khazan’s very first question, “What technology were you already using when you left?” reinforces, up front, the notion that Emma is distanced from the modern, where such questions of technology use would appear banal or puzzling.  Impressions of the connected world are also prominent, such as when Khazan asks Emma, “Do you remember the first time you went on the Internet?” or, “Do Amish people know about the Internet?” or, “What did you think of it when your GED program first said, ‘here’s this system of web pages where you can look up anything’?”

All of this framing serves to give later questions in the interview greater argumentative impact.  “What do people who didn’t grow up Amish not appreciate enough, in your view?” asks Khazan, who immediately follows with, “What tech things do typical Americans think are very cool, but aren’t that cool in the grand scheme of things?” and, “Has technology ever failed you in a certain way?”  Khazan even throws out an observation that could have been lifted straight out of a Sherry Turkle book:  “Some people think social media is making us lonely,” Khazan observes before asking, “Do you agree with that?”  The last question hits upon a distinctive disconnectionist vibe, critiqued most recently by Nathan Jurgenson and Jenny Davis, that frets over the decline of phone calls and the rise of texting, which is implied to be an example of people not engaging in authentic communication.  Emma, already established as a traditionalist figure that is distanced from the modern, becomes the latest privileged person to offer their opinion on this trendy post-modern moral panic.

But the Atlantic interview does more than explore current anxieties related to the Internet; it taps into older conceptions of modern identity even as it subtly alters these conceptions for its own post-modern use.  By suggesting that Emma’s perspective allows us to better evaluate our condition in the ‘connected world’, the Atlantic interview reveals its own indebtedness to turn of the century modernist projects that favor ahistorical identities and introduce anxieties tied to the production of modern citizens.

Allure of the modernist trope utilized in the Atlantic interview draws strength from two intersecting discourses; one concerned with the changing conception of modernity and the other concerned with rhetoric of character. Carl Schorske, in Thinking with History: Exploration in the Passage to Modernism, explored two conceptions of modernity: historical and ahistorical.  Conceptions of modernity sourced in historical thinking emerged in the first half of the 19th century and continued traditions established in the Renaissance and Enlightenment of using the past for inspiration on how to build the present and plan for the future.  Celebration of History became a cornerstone for several cultural advancements of this period and established for newly formed civic governments or nation-states a sense of identity and belonging.  The second half of the 19th and early 20th centuries gave rise to a reactionary modernism that sourced its identity in ahistorical conceptions.  This is the modernism that is most familiar to people today, because it established the notion of exceptionalism modernity embodies.  “Modern architecture, modern music, modern science,” Schorske noted, “all these have defined themselves not so much out of the past, indeed scarcely against the past, but detached from it in a new, autonomous cultural space.”  Historical thinking possessed little value in such detached, autonomous space, especially for the transformative aspects of modernist projects that involved creating new public works or, more importantly, public citizens.

Historical and ahistorical conceptions of modernity are not simply antitheses of each other, but rather, according to Schorske, “successive phases in the same effort to give shape and meaning to European civilization in the era of industrial capitalism and the rise of democratic politics.”  That last part is particularly important.  Industrial capitalism and the rise of immigrant-fueled democratic politics brought new questions and concerns with regards to turn-of-the-century constructions of American identity. This leads to the second discourse involved: rhetoric of character.

James Salazar’s Bodies of Reform: The Rhetoric of Character in Gilded Age America dwells in this turn-of-the-century period and his analysis links Schorske’s work to the modernist trope employed in the Atlantic interview.  Salazar argued that pressures of industrialization and concerns over transformation of individuals into model, modern citizens gave rise to rhetoric of character that contributed to Gilded Age constructions of identity. Character building became a means by which a rapidly industrializing America could resolve, according to Salazar, “the problem of ‘self-governance’ that plagued both the citizen and the state in liberal democracy- the problem of how to maximize liberty while also maintaining the social order- by internalizing the regulatory function of state institutions so that, as Christopher Castiglia concisely puts it, ‘citizens became administrators…of themselves.'” (14-15)

Dependence on character building for the creation of model citizens, however, was fraught with difficulty.  “Because character was ultimately knowable only through manners, behavior, and bodily indicators through which it appeared,” Salazar wrote, “it was vulnerable not only to errors of interpretation but also to the misrepresentations of the skilled manipulator of signs, making character into the site of profound hermeneutic anxiety.” (18) Even though character building instilled normative values for a rapidly industrializing and increasingly diverse population, the inability to authenticate self-governing habits and behaviors produced tremendous anxiety for ahistorical modernist projects concerned with the construction of modern citizens.

Those citizens whose pre-transformation identity deeply intertwined with historical thinking, like the Amish, took on paradoxical importance; ahistorical modernity possessed little use for those who clung to history as the foundation of their identity and yet the ultimate allure of modernity could not be confirmed unless its persuasive power proved superior to historical conceptions.  Transformation of the traditional subject thus became a sort of ‘Holy Grail’ for turn-of-the-century modernists, even as it revealed cracks and fissures of the ahistorical modernist project because verification of transformation, in the case of character building, could never be truly be ascertained.

Post-modernity didn’t entirely abandon the historical/ahistorical debate but, instead, made selective use of both to construct or deconstruct its own notion of identity.  That is why one can read the Atlantic interview with Emma and detect themes of traditionalism versus modernism even as the anxiety of becoming modern shifts from Emma’s transformation to the inherent issues of living in our ‘connected world’.  Handwringing over character building is no longer sourced directly to Emma but rather to our own habits and behaviors.  But even as this postmodern shift occurs it still maintains some of the older anxieties involved in Salazar’s rhetoric of character, placing Emma as an outsider on the path to modernity whose perspective becomes valuable only in relation to its distance from the scene she describes.  In the Atlantic interview Emma embodies many conspicuous aspects of contemporary modernity with her brightly colored skirts and blinged out iPhone case, but there is also a separation involved in the framing of her traditional experience as authentic that calls into question both the value of our postmodern, connected reality and her ability to fully become a member of that reality.

Take, for example, the question where Khazan asks Emma, “What did you think of it when your GED program first said, here’s this system of web pages where you can look up anything?”  In the very same phrase where Emma is described as getting her GED she is also treated as someone who possesses a childlike naiveté with regards to the cultural force that is the Internet.  Her ‘fresh’ perspective is validated even as it calls into question the ultimate compatibility of Emma to fully mesh with American modernity.

This clever twist ensures widespread interest because it parlays anxieties associated with familiar ahistorical modernist tropes into fears of the post-modern project itself, all while maintaining comfortable distancing that ensures the post-modern reader is never invalidated for having such anxiety.  Emma wants to participate in the connected world, after all, and the entire interview celebrates that fact even as it suggests that aspects of that world are less than desirable.

None of the analysis above is meant to discount the experience of Emma, nor is it meant to suggest that Khazan implicitly attempted to portray Emma as a distanced figure.  What it does suggest is that post-modern constructions of identity are filled with narrative tropes that source themselves in turn-of-the-century ideals.  When Khazan questions Emma about how weird it was to use a website to find a boyfriend she does so because of the perception that intimate relations formed via online connections are somehow suspect or worrying to the contemporary reader.  That such a question also served to mark Emma as a distinct other and distance her participation in the post-modern construction of identity is a byproduct of framing her traditionalist viewpoint as authentic commentary on the issues of the connected world.

Jeremy Antley is a doctoral candidate at the University of Kansas whose research focuses on the immigration and settlement of Russian Old Believers to Oregon in the 1960’s and 1970’s.  He occasionally posts thoughts on his personal site, Peasant Muse, and can be found ranting about wargames and Royals baseball on Twitter under the handle @jsantley.