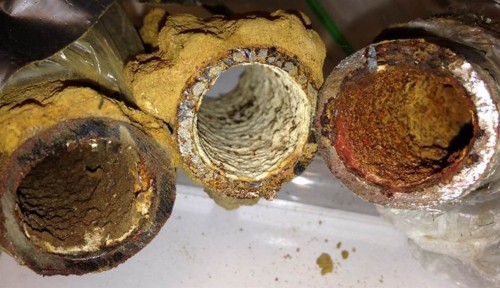 By now I think most people know what happened in Flint, Michigan. An unelected “emergency manager” –appointed and reporting directly to Michigan’s governor Rick Snyder– switched Flint’s water supply from Detroit municipal water to untreated Flint River water. The river water had a higher salinity than Detroit’s water which caused metalic pipes to corrode and leach toxic levels of lead into an entire city’s water supply. This happened back in 2013 and it is still an unresolved problem. The solution for Flint is straightforward: replace all the pipes and provide the kind of lifetime care needed for children and other vulnerable populations that have irreprable neurological damage from lead poisoning. What is less straightforward is how to prevent these kinds of problems from happening in the future. Because while this happened under a terrible governance structure, similar ongoing disasters are occurring in places that still have some form of elected, local governance still in tact. This is as much a problem of science and technology as it is an issue of governance and accountability. What is to be done?

Marc Edwards, a Virginia Tech scientist who was one of the loudest whistle blowers regarding the Flint water crisis had a refreshingly blunt response to this problem when he was interviewed in the Chronicle:

I am very concerned about the culture of academia in this country and the perverse incentives that are given to young faculty. The pressures to get funding are just extraordinary. We’re all on this hedonistic treadmill — pursuing funding, pursuing fame, pursuing h-index — and the idea of science as a public good is being lost.

This is something that I’m upset about deeply. I’ve kind of dedicated my career to try to raise awareness about this. I’m losing a lot of friends. People don’t want to hear this. But we have to get this fixed, and fixed fast, or else we are going to lose this symbiotic relationship with the public. They will stop supporting us.

He goes on to note that the government agencies that would normally fund scientists’ research into the problem were, themselves, the problem which makes it nearly impossible for any scientist to do life-saving work if they have any desire to be employed the next day or funded next year.

This dynamic has been a known problem among science and technology studies scholars for a long time but little structural change has been accomplished. If any long-lasting good can come from the Flint water crisis, it may be a significant change in how science is funded in this country. Back in 2014 I had an essay that ran in Tikkun Magazine suggested one possible solution to a problem like Flint. I’ll conclude this short essay by block quoting that proposed solution:

The New Deal programs that started life as direct assistance to the poor but have since morphed into command-and-control structures (some privatized) that do more to monitor and sanction people than feed and house them should be left to wither on the vine. Leftists can ill afford to spend the money and effort in reforming these social and technological systems. In their place we must form networks of locally run organizations that treat people with dignity and respect.

The beginning of this process might look like the block grants to state and local governments that were popular under Carter but disappeared under Reagan and never came back. Large sums of money must be remitted directly to communities without unfunded mandates for metrics and sampling. The measure of success should begin and end with the communities that receive the money: it requires a massive amount of trust. The sort of trust that can only come from treating fellow citizens like compassionate and loving whole persons. For this to succeed where it is needed the most, large leftist organizations must identify and federate with organizations doing good work in more conservative regions of the country. This process starts with basic resource assessments and a revitalization of civic institutions in places like the Ninth Ward of New Orleans, Louisiana; Immokalee, Florida; and countless other towns and cities ravaged by capitalism.

Free education should be available to all, but nothing changes if newly minted experts continue to work for malevolent corporations and/or detached universities. Therefore, in addition to providing no-strings-attached block grants, the government should pay an array of experts to put themselves up for hire by communities to help solve problems in a collaborative and deliberative way. Imagine a clearinghouse of sociologists, water chemists, lawyers, economists, and geologists all fully paid by the federal government and willing work with a community to solve problems identified by its residents.