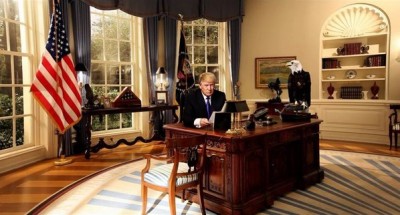 Trump proposes to restrict any and all immigration by Muslims into the United States “until our country’s representatives can figure out what is going on.” It’s almost unprecedented; while the US has a long history of restricting immigration from “undesirables,” Trump’s proposal harkens back to the 19th Century Chinese Exclusion Act, which even our own House of Representatives regrets. The proposal is also so vague that it could be satire. Until they figure out what is going on? What does that mean? But, in a time when policy proposals to address terrorism are often too complex or insubstantial to satisfy American xenophobia, Trump sets forth a plan that can, to some degree, quell these fears in a way that is easy to understand. Just keep them out.

One of the things that people like about Trump—and arguably a major contributor to his campaign’s success thus far—is how plain spoken he is. He’s “folksy” in the way Sarah Palin is, but more unflappable. He gives speeches off the cuff, makes up stuff and boldly defends it no matter how obviously untrue. He’s a bullshitter in the philosophical sense of the term, as Maria Hartwig explains in a recent interview with On the Media. While a liar must know the truth in order to better conceal it, a bullshitter’s only goal is to obscure facts for personal advancement. And one of the best things about bullshit? It spreads like wildfire. It often feels true, and it’s hard to debunk. And it’s super tweetable.

Trump has a huge twitter presence; while his closest competition in the GOP presidential bid Ted Cruz has 625 thousand followers, Trump has 5.12 million. His tweets also see an enormous amount of engagement. He often gets thousands of retweets and likes, on par with the engagement on President Obama’s account, which has more than 10 times as many followers. Trump twitter followers are also incredibly responsive. They make image macros, use dozens of hashtags, and express their adoration for him in volumes that would make Justin Bieber jealous.

This tweetability is in many ways the exact opposite of Obama’s policy proposals. While Obama often makes dense, nuanced arguments to the point of alienating people, Trump cuts straight to the point. While Obama uses carefully crafted rhetoric that deftly avoids clear and easy solutions to complicated problems, Trump leaves little to no grey area. On the US military campaigns in the Middle East, Obama opposes a ground war, lays out in detail the need for diplomacy and coalitions, and calls for unity among all Americans. Trump sticks to straight forward proposals like smashing ISIS, winning, and of course, Making America Great Again. For voters exhausted by what they perceive as Obama’s elitism, Trump is a breath of fresh air. Rhetorically, Trump is the anti-Obama. Or, if you prefer, BizzarObama.

Obama was also a very tweetable candidate—his social media ground game was excellent and he had plenty of concise and resonating sound bites. But Candidate Obama and President Obama have very different media presences, and while Obama used social media primarily to appeal to young people, the internet has changed since then. In 2008, only 7% of people 65 and over were on the internet. Last year, that number was up to 49%. This leaves the door open for different sorts of messages to resonate online, and as Trump’s supporters skew older there is a very different dynamic between Obama’s social media presence in 2008 and Trump’s in 2016.

Tweetability is key in political campaigns. Speech writers carefully insert short, poignant statements into speeches that can be easily circulated and that will resonate even when removed from their context. This strategy long predates social media, but it has arguably become even more necessary in a media-saturated world. I think it’s one of John Kasich’s biggest weakness—he’s got the chops to compete in a national election, but he’s too long-winded and, frankly, boring to appeal to the base. Trump on the other hand is the most media savvy candidate the US has ever seen. He answers the question he wanted you to ask, he’s attention grabbing and deferential to his fans, and stirs up enough controversy to get covered by everyone all the time.

You might have had the experience of getting into a debate on Twitter that the medium just can’t afford—the points you want to make are too nuanced and require more characters and references than are possible. “This is not a conversation for Twitter,” someone will often say at some point. But this is what’s great about Trump—if a debate is too complex for Twitter, he just doesn’t engage. The Twitter-debate metric can be used for all of Trump’s disagreements: interviews, presidential debates, journalists. If you try to pin him down on a point he talks past you. He repeats the same point again and again until his opponent just gives up from exhaustion or frustration. He insults you or has you kicked out. Going through his Twitter followers’ replies shows just how much this rhetorical style filters down. Arguments among his respondents tend to follow a simple formula: detractors call him a bigot and tell him to shut up, and supporters tell him they love him and ask him to make America great again.

In some ways, Trump tweets a bit like your grandpa might (no offense to grandpas). He uses ALL CAPS a lot, ends most of his sentences in exclamation points, and does whatever this weird thing is when he wants to retweet someone:

But the beauty of Trump’s tweetability is that his fans don’t really care if he’s manicured or carefully crafted—it’s what they love about him. His tweets read just like his speeches sound. They’re off the cuff, natural, and engaging. It’s almost as if he’s sitting in his private jet, channel surfing and barking whatever comes into his head at his media handler. It’s also the thing that’s most dangerous about his horrifying political agenda. Don’t make the mistake of thinking that Ted Cruz wouldn’t love to close the border to all Muslims; he just doesn’t have the charisma to pull off that kind of bombastic rhetoric. His policy proposals look more like this. Not very tweetable. If Trump were simply a hateful, bigoted politician with fascistic designs he wouldn’t actually be that different from many other elected representatives in the US. It’s the packaging of his messages, and his ability to say simply and explicitly what people want to hear, that makes him different. And what makes him dangerous.