Being a Special Video Game Heroine 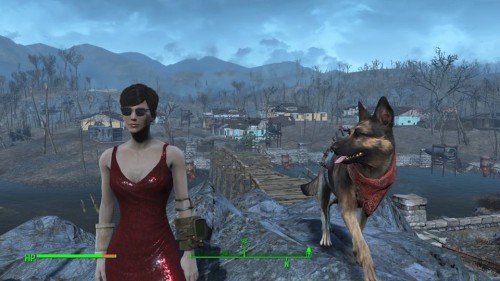 Fallout 4 tells me that I am special.

At the start of the game, I am prompted to assign point values to Strength, Perception, Endurance, Charisma, Intelligence, Agility, and Luck (yes, that spells SPECIAL) as an initial step towards the crafting of my customized protagonist. These statistics form the foundation of my character’s abilities, skills, and know-how. I will build on them and further specify them in the course of my play.

But Fallout 4 tells me that I am special in other ways, namely through the ways that it positions my protagonist within its narrative. My character is the lone survivor of a fallout shelter following a devastating nuclear war. She is cryogenically frozen, but wakes from her sleep long enough to witness her husband murdered and her infant son kidnapped. When she emerges from the vault 200 years after first entering it, she’s on a mission to find her son, despite having no knowledge of when the kidnapping happened.

Somehow, though, the local populace of wasteland Boston quickly determines that she exhibits exceptional leadership and combat skills. So they name her General, task her with the responsibility of restoring a floundering militia group, and put her at the head of rebuilding a new settlement and ultimately uniting the Commonwealth. Thus, immediately after emerging from a 200-year sleep during which time the world as she knew it was destroyed, my affluent-professional-suburban-Boston-wife-mother character is able to navigate a hostile irradiated wasteland, find resources on her own, master a particular fighting prowess, and then convince a straggling group of survivors to make her their leader. Soon enough she’s binding other settlements to her cause and gradually seizing power over the Commonwealth.

It’s absurd. Yet, it’s a setup that will likely be familiar and unquestioned for many players of video games. It’s a persistent trope: the player-character abruptly thrust from ordinariness into extraordinariness. At first, a humble and unassuming civilian—moments later, a military commander, a leader, a hero, the one hope for world salvation. Video games use this scenario very, very frequently. Especially AAA games like Fallout 4.

AAA Video Gaming is basically like having someone baby talk to you. who's my special boy? you are! oh, my special boy made a pillow fort!

It’s a trope that, understandably, has come under some criticism. Nick Capozzoli’s comment sparked a conversation on Twitter that illustrates a number of concerns with this narrative model, as well as other similar coddling from the AAA industry. In the replies, Capozzoli noted that AAA games allow players to become anything they want and reward them for doing so. Others that took part in the conversation griped that the ability to get what one wants, do what one wants, and become what one wants is infantilizing. They accused games of treating these situations immaturely and in ways disconnected from reality.

Inanity and childish wish fulfillment aren’t the only criticisms leveled at the archetype of the unassuming-yet-exceptional player-hero. There’s also ideology at work. For instance, as Mattie Brice has remarked,

To put it frankly, gamers are set up to be colonial forces. It’s about individuality, conquering, and solving. Feeling empowered and free at the expense of the world. Many games try to evoke the qualities of play most commonly associated with boys and men. Many games envision their average player to be white, a man, heterosexual, American, and a whole list of other privileged qualities. Meaning, they act much like our reality set up to have a particular group of people feel good about their lives as long as they are complicit with the system.

As Brice indicates, these storylines can be read as enshrining and reproducing hegemonic American cultural values. Fallout 4, for example, could be interpreted as embracing rugged individuality; the capacity to rise to power through hard work; masculine potency; peace enforced through armed combat; and a will to leadership, among others. One could also read this narrative of specialness as an attempt to appeal to the sensibilities of millennials, if one buys into the myth of their entitlement and narcissism.

While ideological critiques such as these are invaluable for uncovering the assumptions of many video games, I think many of them overlook their own starting point: a prevailing male-centric outlook. Such androcentrism is not only at the core of much of game design, but also in the angles and approaches of games criticism itself. A great deal of games criticism assumes that, since games are made with a male audience in mind, the values that they sanction are those with a specific appeal to men. Although Capozzoli’s comment comes from his male subject position, it also evinces the notion that a game like Fallout 4 is speaking to special boys. Likewise, Brice examines and condemns the ideologies of games from the assumption that their players are male.

But do these narratives and mechanics have the same implications when experienced from the perspectives of women or marginalized identities? Are the game’s only meanings those that apply to a presumed target audience?

For me, Fallout 4’s narrative of specialness provides opportunities to experience subject positions that I am not able to enjoy outside of its confines. While the game’s story and character development are utterly unrealistic, there are aspects of this unreality that are empowering to me. The game places my character—a woman, of my own choosing—into a leadership position that is not once called into question on the basis of her gender identity or her body. There are no misogynistic comments that cast her worthiness into doubt. No one tells her that she is not fit for combat. Only nameless enemies dare to call her a bitch—only to meet their messy deaths moments later.

I don’t entirely care about the game’s poor storytelling. I have every opportunity to ignore the quest to find my character’s lost son and even the shallow conflict about humanity’s abuses of technology. Instead, I can explore, build my settlements, and craft the world to my own liking. I can overlook the lack of explanation behind my character’s formidable capabilities and map a story of my own liking onto her: She is a woman who has gone through unimaginable tragedy and turmoil. But she has picked herself up and found a strength of her own that is answerable to no one. She goes it alone, with her dog as her only companion—and she not only survives, but thrives and conquers.

Through the woman character that I have created and that I embody in my gameplay, I can feel in possession of opportunities that do not exist for me, a woman, outside of the game. I can be a direct, firm, confident leader, a ruthless combatant, a cunning negotiator that makes alliances with competing factions to consolidate her rule. I can be a benevolent dictator who provides for settlers even while investing scarce resources in the creation of her own giant mansion in the middle of town. I don’t have to be nice. I face no pressure to perform in the feminine ways expected of me in my lived reality. No one holds against me that I am not maternal, nurturing, pliant, or agreeable. I don’t feel like I must apologize for my successes or my power. So I don’t care if Fallout 4’s narrative of specialness is disconnected from reality—sometimes, I want to experience subject positions for which my reality refuses to allow or that may be in direct contradiction to the kind of person I usually try to be.

Certainly, these appeals still fall into those narrative tropes and ideological issues that so many critics find distasteful. Everything that I have said could also just as easily be said by a white male who believes himself to be disempowered and who wishes to also have the experiences of being an indomitable fighter and a selfish, capitalist tyrant. However, that does not prevent my experience of Fallout 4 from being meaningful to me in ways that criticism often overlooks, due to my position as a woman and the opportunities afforded to me by playing as a woman protagonist of my own determination. Thus, even as they may appear to reproduce patriarchal structures from some angles of criticism, many video games nevertheless may offer opportunities for experiences outside of or in opposition to the oppressive binds that shape the daily lives of many players.

While we could dismiss the hackneyed and overused special-hero structure, condemn it, and call for its absolute eradication from the gaming landscape, I don’t think that this would be an entirely thoughtful approach (although this doesn’t mean that the AAA industry couldn’t cut back on its use). Instead, I think we could reevaluate the potentialities of these experiences for those that occupy marginalized positions. We should continue calling for the further blasting-open of these subject positions in video games, to allow them to be experienced by those who are often denied power. One way of approaching this goal is to not limit our criticisms of these structures to the import that they may have for hegemonic subjectivities. We must open our criticism to the possibilities for alternative, resistant forms of play and experience.

Stephanie Jennings is a graduate student at Rensselaer Polytechnic Institute. She can be found on Twitter @stephaniejngs.