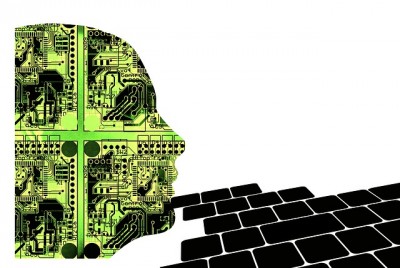 The International Joint Conference on Artificial Intelligence (IJCAI15) met last week in Buenos Aires. AI has long captured the public imagination, and researchers are making fast advances. Conferences like IJCAI15 have high stakes, as “smart” machines become increasingly integrated into personal and public life. Because of these high stakes, it is important that we remain precise in our discourse and thought surrounding these technologies. In an effort towards precision, I offer simple, corrective point: intelligence is never artificial.

Machine intelligence, like human intelligence, is quite real. That machine intelligence processes through hardware and code has no bearing on its authenticity. The machine does not pretend to learn, it really learns, it actually gets smarter, and it does so through interactions with the environment. Ya know, just like people.

To distinguish human from machine intelligence through the criteria of artificiality is to misunderstand the very basis of the human mind.

Humans have poor instincts. Far from natural, even our earliest search for food (i.e., the breast) is often fraught with hardship, confusion, and many times, failure. Let alone learning to love, empathize, write, and calculate numbers. As anthropologists and neuroscientists have and continue to show, the mind is a process, and this process requires training. Like machines, humans have to learn how to learn. Like machines, the human brain is manufactured. Like machines, the human brain learns with the cultural logic within which it develops.

Variations in intelligence do not, therefore, hinge on artificiality. Instead, they hinge on vessel and autonomy.

The two ideal-type vessels are human and machine; one soft, wet, and vulnerable to disease, the other materially variable and vulnerable to malware. Think Jennings and Rutter vs. Watson on Jeopardy. In practice, these vessels can—and do—overlap. Ritalin affects human learning just as software upgrades affect machine learning; humans can plant chips in their bodies, learning with both organic matter and silicon; robots can feel soft, wet, and look convincingly fleshy. Both humans and machines can originate in labs. However, without going entirely down the philosophical and scientific rabbit hole of the human/machine Venn diagram, humans and machines certainly maintain distinct material makeups, existential meanings, and ontologies. One way to differentiate between human and machine intelligence is therefore quite simple: human intelligence resides in humans while machine intelligence resides in machines. Sometimes, humans and machines combine.

Both human and machine intelligence vary in their autonomy. While some humans are “free thinkers” others remain “close-minded.” Some socio-historical conditions afford broad lines of thought and action, while others relegate human potential to narrow and linear tracks. So too, when talking about machine intelligence and its advances, what people are really referring to is the extent to which the machine can think, learn, and do, on its own. For example, IJCIA15 opened with a now viral letter from the Future of Life Institute in which AI and Robotics researchers warn against the weaponziation/militarization of artificial intelligence. In it, the authors explicitly differentiate between autonomous weapons and drones. The latter is under ultimate human control, while the former is not. Instead, an autonomous weapon acts on its own accord. Machine intelligence is therefore not more or less artificial, but more or less autonomous.

I should point out that ultimate autonomy is not possible for either humans or machines. Machines are coded with a logic that limits the horizon of possibilities, just as humans are socialized with implicit and explicit logical boundaries[1]. Autonomy therefore operates upon a continuum, with only machines able to achieve absolute zero autonomy, and neither human nor machine able to achieve total autonomy. In short, an autonomous machine approximates human levels of free thought and action, but neither human nor machine operate with boundless cognitive freedom.

Summarily: ‘Artificial Intelligence’ is  not artificial. It is machine-based and autonomous.

[1] I want to thank James Chouinard for this point.