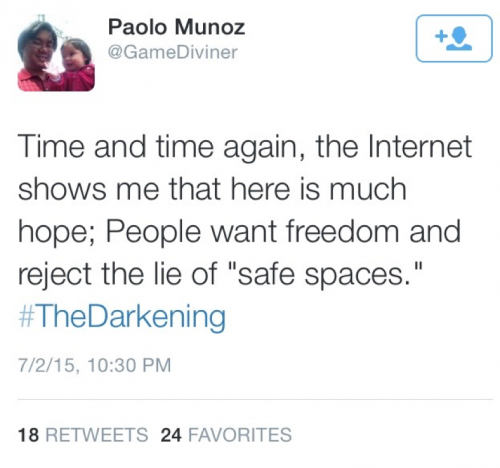 For many Reddit users, these are dark times indeed. With the banning of r/fatpeoplehate and other subreddits that did not curtail harassment and vote brigading, followed more recently by the sudden dismissal of Reddit employees including Victoria Taylor, many users are criticizing the increase in top-down administrative decisions made under the leadership of interim CEO Ellen Pao.  Alongside these criticisms are accusations that the “PC” culture of safe spaces and “social justice warriors” has eroded the ideological foundations of Reddit culture–freedom of speech, democracy, and the right to be offensive under any circumstances. Meanwhile, Reddit’s biggest competitor voat.co is having a hard time keeping their servers functioning with the massive influx of traffic.

The abrupt and unexplained dismissal of Victoria Taylor has become a particularly vivid rallying point for disgruntled users. Many moderators set their subreddits to private or restricted submissions, effectively making Reddit unusable and invisible for a vast majority of visitors. “The Blackout” (aka #TheDarkening) lasted from late Thursday (7/2) until Friday afternoon when most subreddits came back online; it is one of several tactics used so far in the “Reddit Revolt.” At this time a change.org petition calling for Ellen Pao to step down is nearing 200,000 supporters.

One of the more confusing elements of the revolt is the target of redditors’ anger. Who is to blame for this perceived assault on liberty and the free exchange of ideas? For now, two seemingly opposed forces are bearing the brunt of accusation. These are Ellen Pao, under the influence of commercial interests, and social justice activists who criticize Reddit for tolerating and perpetuating hateful discourse. No one is speaking up on the cause of Taylor’s dismissal, which has led to speculation that she was fired for refusing to comply with the increasingly commercial motivations of Reddit admins, that she would not relocate from New York to San Francisco, or that she did not sufficiently manage the controversial Jessie Jackson AMA. Without more information, and in the context of other recent changes to Reddit, users alternate between blaming encroaching corporatism or PC freedom police who are finally ruining the internet.

So, how can these two forces both be responsible for the changes taking place on Reddit, and in other media such as television and gaming? Consider that a cornerstone of the Gamer Gate fiasco has been the assertion that market forces, not SJW activism, should determine the content and character of video games. Opposition to greater inclusivity in games, such as more central female, minority, and queer characters, has often been justified through free market rhetoric; the assertion is that men are the primary consumers of games, and that their demographic preferences do–and should–determine content. Any other force driving game design is perceived as ideologically motivated, propagandizing, and an assault on liberty.

If video game production companies are acquiescing to the demands of activists, they have not been forthcoming about it. Instead, they claim to be adapting to a marketplace in which women, people of color, and LGBTQ individuals occupy an ever increasing consumer base. Perhaps the activist/consumer dichotomy is more distracting than useful, given that the voices most critical of capitalism’s ability to turn identity into a commodity are also the ones advocating to see a bit of themselves in their beloved games. Here again, people are caught between wanting to see their values and identities reflected back at them in the media that they love, and coming to terms with what capitalist logics do to those values and identities.

On its face, the simultaneous blame directed at SJWs and commercialization seems at odds. But given the ability of neoliberal late capitalism to commodify identity and the self, and to turn nearly any element of culture into a profitable enterprise, this muddiness is a logical outcome of the contradictions of capitalism that Marx believed would be its downfall. Instead, neoliberalism and identity politics send capitalism into overdrive as the need to colonize ever expanding markets and commodify even the most absurd abstractions turns anti-capitalist ideology into easily packaged products. Rather than disturbing the supposed working-class false consciousness, the contradiction has accounted for it and marketed it back to the very people it exploits. It’s only a matter of time before Walmart starts selling a t-shirt that reads “Social Justice Warrior!” in yellow glitter.

Also central to the Reddit Revolt are discussions of labor and exploitation. Many on Reddit have remarked on the betrayal of moderators by the admins. Mods develop and manage Reddit content on their own time and for no compensation, a service admins rely on for the site to function and be profitable. In exchange, mods have historically been given relative freedom within the subreddits they moderate. Now that this freedom is being restricted or, as in the case with Victoria Taylor, decisions are made at the admin level without consulting or even informing mods, mods and users are taking the opportunity to air more general grievances, like the lack of investment in the site’s infrastructure.

Here is the centerpiece of the Reddit Revolt paradox: what is a redditor relative to the admins, or to the site itself? Redditors perceive themselves as members of a community, or perhaps as customers of the site. In many instances they even see themselves as workers generating content for the site to the benefit of the admins. But redditors are not customers, nor are they simply workers—they are the product. To complicate this further, the Reddit Revolt requires all of us to grapple with digital and affective labor, and its tendency to blur the categories of workers, products, and consumers. Ellen Pao’s job is not to make Reddit a happy community, it is to sell the attention of redditors to advertisers. And even as users begin to understand that Reddit is less like a community and more like a factory, they seem less clear on their position within this factory. Redditors are not so much customers engaged in a boycott or even laborers on strike, they are products. As products, the only effective protest movement redditors could possibly engage in would be to remove themselves from the market. Hence, the blackout.

While the blackout was fairly short lived, another is planned for next Friday (July 10th) for 24 hours. Users have also been telling each other to install and enable ad blockers and discouraging each other from giving Reddit Gold. But the fact is, Reddit admins can shoulder the brunt of a couple of blackout days or fewer gold subscriptions. Given how quickly the front page returned to normal over the weekend it seems unlikely that any sustained movement will take hold. And while they may make promises to users about changes to come, Reddit admins will continue to do what all successful corporate entities require—turn a profit, often at the expense of those who use, make, or even are the product.

It’s to be expected that redditors feel betrayed by the powers that be for undermining the perceived ethos of Reddit as a community in which ideas—any ideas—can be freely exchanged. But there is perhaps a deeper betrayal that has not been articulated in the dominant narrative of the Reddit Revolt. That is the betrayal of western rationalism itself, and the notion that free markets and free speech are two articulations of a deeper, natural order that ultimately works in favor of the masses. The rhetorical relationship between freedom of expression and freedom of markets performs key ideological work for the perpetuation of an American-flavored narrative that capitalism is the great equalizer. While events like the Citizens United Supreme Court case occasionally highlight the absurdity of this argument, it is pervasive and often unseen. That cornerstone of western rationalism that so many redditors love is playing out in ways that they really really do not love. And the rupture will require more than dank memes and mental gymnastics to reconcile.

Britney Summit-Gil is a graduate student in Communication and Media at Rensselaer Polytechnic Institute. She tweets occasionally at @beersandbooks.

Your comment gets to the heart of why the worker/customer/product distinction is so complicated online, particularly in a place like Reddit which relies entirely on users to generate content. You're right, redditors aren't *merely* the product, but from an admin perspective (particularly in the lead up to the decision to fire Victoria) it certainly seems that they are being treated as such. And while I agree that the admins may be in a somewhat precarious situation here, it would require a sustained, massive movement of redditors to remove themselves and content from the site to be very effective. Looking at the traffic stats for r/askreddit over the last few days, I'm not convinced this small hiccup will lead to that. Yet. https://www.reddit.com/r/AskReddit/about/traffic

I agree that the current problems won't have an immediate impact, mainly because of the inertia that reddit has built over the last few years. Note that lots of sites --- including this one --- have reddit links, and these things take time to change. Digg links lasted on various websites long after Digg became an also-run. This goes to ecosystem lock-in, just like Microsoft Windows or Apple iOS keep you on their system by being familiar and being integrated with lots of other systems. But long run this doesn't bode well for reddit since it doesn't have the same sort of hold that operating systems have over their users.