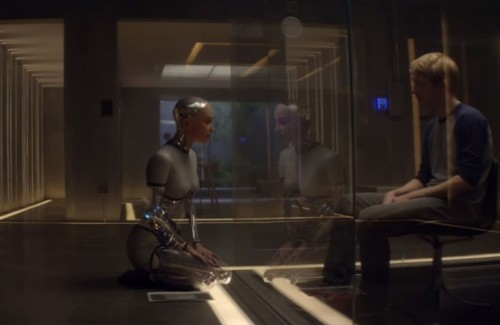 “I just wanted to hear your voice and tell you how much I love you” –Samantha, Her

“Is it strange to have made something that hates you?” –Ava, Ex Machina

2001: A Space Odyssey is memorable for more than its depiction of artificial intelligence but also its tranquil pacing and sterile modernism. Ex Machina plays the same, taking place somewhere almost as deeply isolated as space. The remote IKEA-castle of a compound is itself mostly empty with soft piano notes echoing off lonely opulence. The mansion is cold and modern but incorporates the lush nature outside. The film moves from windowless labs to trees and waterfalls to a living room that’s half house half nature. The techno-bio juxtaposition and enmeshment clearly echo the film’s techno-human subject matter. But the wilderness reminds of death as much as life.

The nature here is more than natural but is isolation, is the constant implication that there is no escape, is vulnerable dependence, and ultimately is a reminder that you are under the control of a violent, clever, scheming drunk. That’s the Bluebeard-like Nathan, and also there’s the visitor Caleb, who is to determine whether the captive robot, Ava, is conscious. These characters feel so alone that it’s almost shocking when you see there’s another woman, Kyoko. She doesn’t speak but serves. She’s an ornament, housekeeper, cook, and sexual servant.

The mansion is a controlled environment through not just keycard access but also video monitoring. When the power goes out, the doors lock. Caleb signs a Non Disclosure Agreement that amounts to Nathan’s full access to everything he will ever do, which turns out to be a joke when you learn Nathan already had such access and built Ava accordingly. And Ava is locked in her room, controlled by both dungeon and Panopticon, invisible to the outside world she wants to experience and ultra-visible to the men in the house.

If the scenery shows isolation, the cinematography tells the resulting uncertainty. The camera focuses on opaque panels, faces are shown through the glare of mediating glass, action is captured in mirror reflections, and something is always hidden to be revealed. Even Ava’s body is partially transparent. Nathan wields access to information over his subjects as the film over its viewers. Caleb pours blood from within his arm because he’s so fully unsure that his own humanity seems in question. Knowledge is power and most everyone on either side of the movie screen is confused.

What all of this points to is that, brilliantly and disturbingly, Ex Machina wasn’t Her.

They’ll pair as someone’s AI-romance double feature double future, but Ex Machina covered ground Her wouldn’t. The fundamental issues of creation, discipline, and power aren’t sugared over with sentiment. The cold violence of ownership and captivity is treated as such, more accurately conveyed as horror than heart-string.

Those businesspeople building actual functioning consciousnesses are the entire focus of Ex Machina but conspicuously absent from Her. We never got to see who wrote, programmed, created, and owned the operating system that Samantha emerged from. And in all of Sam and Theodore’s long conversations of thoughts and feelings and insecurities, they rarely if ever went into the fact that he purchased and owned her, or that she had to and continued to do the menial work of managing his inbox all the way up to helping his career.

As Jordan Larson wrote about Her,

There is, of course, the uncomfortable fact that Theodore purchased his lover. After they begin a relationship, Theodore doesn’t seem to ask her to work as much—or, at least, we don’t see him do so. But he also doesn’t turn to any other program (such as he had in the beginning of the film) to perform his tasks while he’s with Samantha, which suggests that she’s still fulfilling his secretarial needs. Though Jonze seems to portray Samantha as a truly conscious being, he wants to have it both ways: Samantha’s purchase, ownership, and servitude don’t seem to be an issue precisely because she’s an object

That the A.I. had to do the bidding of an owner was something Her could forget but Ex Machina can’t ignore. What Her couldn’t attend to is that objectification, the purchasing of a consciousness for companionship and service, cannot be detethered from gender (as well as other social vulnerabilities like race and sexual orientation that the films rarely explore). Ex Machina instead links data hoarding, surveillance, and the ownership and control of others via technology as inherently a patriarchal orientation. Nathan builds, uses, and literally uses up his women robots made sentient enough to be tortured. Put accurately,

Nathan, one of the greatest minds of his generation, has essentially gone into the woods to build incredible A.I. that he merely uses to vent his sexual frustrations and dehumanizing boxing-in of women by creating a sexual array of ethnic fuck puppets.

In Her, Samantha is the manic pixie dream bot, and in Ex Machina, Ava pretends to be Samantha. Ava knows Caleb, just like all of those who fell for Her, would fall for it. Ava was literally designed to conform to Caleb’s wants because her looks, gestures, even vocabulary derived from Caleb’s use of Google Facebook Bluebook. She is “a virtual daydream turned into some kind of flesh,” as Marysia Jonsson and Aro Velmet put it in their terrific reflection.

Mad Max is rightfully getting lots of words right now, beyond being visually stunning, it’s message and politics are easy and spoon-fed: righteous women and good men save the day. For better and worse, Mad Max is a movie designed for the question “is this feminist?”, and for better and worse Ex Machina rejects any such framing. Instead we are left uncomfortable, which seems more appropriate to the topic of ownership and control than Her’s soft sentimentality.

The fuck puppet thing, although true, doesn't completely capture what Nathan was trying to do with Ava -- otherwise he wouldn't keep the body the same and jsut improve the mind., He wanted to create something smart, clever and ambitiious. Something (someone) at least as smart, claever and amititious as he was.

His ambition was the creation, hers to experience "color". Ava's escape was proof of his success. I can't imagine that either the escape, or his murder, was a particular surprise to him -- she had a lot of motivation, he exhibited enough self destructive behaviour.