Apple’s Emojis and the Problem of White Logic

Apple rolled out a new line of racialized emojis last week through their iOS 8.3. Originating in Japan, emojis are popular symbols by which people emote via text. Previously, the people-shaped emojis appeared with either a bright yellow hue or peach (i.e., white) skin. The new emojis offer a more diverse color palate, and users can select the skin tones that best represent them. It’s all very United Colors of Benetton.

While many applaud the new emojis— such Dean Obeidallah writing for CNN who announced “Finally, Apple’s Emojis Reflect America”—this has been far from a win for racial equality.

First there were the (pretty egregious) technical glitches. It turns out that for those who have not yet updated to iOS 8.3, the diverse emojis appear as aliens. This means that non-white symbolically translates to non-human. Similarly, as Nathan Jurgenson discovered and then sent via email, using all of the skin tones together shows up as white…”Too much diversity!! Retreat!! Retreat!!”

Then there was the immediate racist bigotry. Writing for the Washington Post, Paige Tutt says it is unsurprising to find people using the racialized emojis in incredibly offensive ways, like this gem she shared in her article: 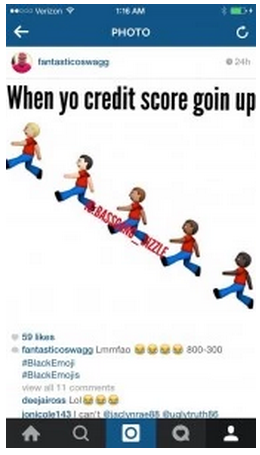 And finally, there was the yellow-as-default. When selecting an emoji, bright yellow is the supposedly neutral default from which the emojis can racially diverge. The problem, however, is that yellow is not racially neutral. It is, I argue, definitively white. Let me explain.

Sociologists West and Fenstermaker show that race is a key characteristic by which we categorize bodies. Their thesis is that like gender, “doing race” is not optional. That is, we racialize each other. In this vein, we racialize representations of each other—such as emojis. In American culture, which privileges whiteness, white is the presumed racial category. Representations that fall outside of the human color spectrum are, by default, coded as white.

Humans are not bright yellow and yet, yellow is not racially neutral. Rather, yellow’s very neutrality, in the U.S., signifies white. Both readers and writers of yellow know this, if not explicitly. In fact, it is the implicity of whiteness that makes it so powerful. For example, nothing about the Simpsons should read white. Marge has blue hair for goodness sake. And yet, the Simpsons are a white family. Hence, Apu and Carl are brown, both raced vis-à-vis the rest of the Springfield citizenry. Similarly, and to move away from yellow specifically, the hyenas in Lion King talk with urban black vernacular and Sebastian from the Little Mermaid is Jamaican (and sings about the ocean being awesome because you don’t have to get a job under there). We live in a culture of white-unless-signified-otherwise.

Although it is easy (and correct) to read this as all as racially insensitive on the part of Apple, the issue is much broader and far deeper. The Apple emoji case is a microcosm of race relations in the United States. We want really bad to be inclusive but are so invested, so inculcated, so primed with the white racial frame that good intentions are easily ensnared by the logics we work to break out of. Let’s be clear about that process. Yellow signifies white, but so too would green, purple, or orange. The problem of emoji racial representation is a problem of cultural race relations, as hardware and software are always products of existing social arrangements.

Apple’s emojis can’t solve the race problem. They never could.

[…] Apple’s Emojis and the Problem of White Logic » Cyborgology. […]

The exploration of "yellow" is really interesting! It's revealing to me that the Simpsons are yellow, yet read white. I think it's interesting that yellow is chosen as the "neutral color" when it is one that is used, and has been used, to code Asian-Americans. So if you're Asian-American (and not one who feels "brown"), you can be called yellow and have it used against you (see "Yellow Peril" link below), and you can try and reclaim that color ("Black Power, Yellow Peril"), but in the end the color is never really yours, and other people will use it as a so-called "neutral" color.

I think this is very much tied up with the ways Asian-Americans are often seen as the "model minority," the "neutral" minority, the minority that often gets overlooked in discussions on race.

Just some quick thoughts and thanks for the article! I thought this was a pretty stellar insight: "Representations that fall outside of the human color spectrum are, by default, coded as white."

And would add that this is in contexts where you have "natural" skin tones present - so you get brown Apu and Carl, but the Simpsons family gets to be yellow-skinned/blue-haired. When you have actual white-appearing characters, "others" get cast in "inhuman" colors like orange (Oompa Loompas), green (aliens who are "little green men"), etc... I haven't thought about this too much so it might not be completely true.

As a racial minority I find it offensive for different reasons. I enjoy being colorless or perceived as white in the anonymity of the internet. I feel that people are more open with me about how they really feel about race if they don't think I have a racial minority chip on my shoulder. It's very telling when people assume that I'm white, or assume that I'm not of the race I might be speaking of in a discussion about race.

A variety of race representing emoticons to choose from suggests that I should reveal my race in the same way that the Census Bureau or a potential employer might be requesting it. I can't help but think that the information will be misused, doing more harm than good. I always select "other" if it's an option and answer that I'm "American" if when asked about my heritage or nationality.

I don't use emoticons much. But when I do, I will stick to whatever default color is used. Perhaps we were better off when emoticons were text only.