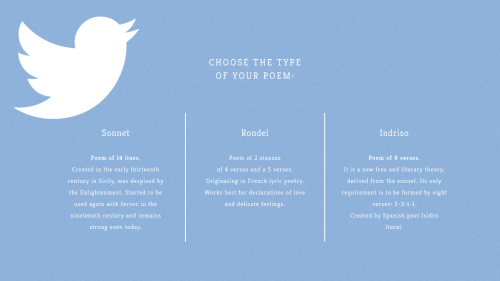 Fabulously awesome, congratulations
That wouldn’t be weird, right?
Put up with for a lot of reasons

Me. It also still has no title.
I may be able to help you out
Gorgeous. Sorta choked up a little.

Dudes are just not even human.

When I decided to try to throw something together about Poetweet it went without saying that I’d have to see what it scraped together out of me (note the “me”; I used that word without thinking about it and we’ll return to that shortly). And of course, looking at it, I’m making instinctive sense of it. I recognize those as my words, and arranged in that fashion they do indeed seem to make a kind of sense. Further, it’s a pleasurable kind of sense – doofy, a little ridiculous, a little nonsensical in spite of itself, but I read and I (granted the bias) am all like hey, I kinda like that person.

Which is actually somewhat remarkable considering how difficult it can be to like oneself.

For those who don’t know – and I’ve had my head deep in writing and editing so I’ll admit I hadn’t heard of it either until Nathan Jurgenson brought it to my attention this morning – Poetweet is a bot which scrapes your Twitter account for stuff and arranges it into one of three different poetic styles (I went with Indriso because “new free and literary theory” sounded deep and vaguely edgy and sonnets are so old and done at this point and who the hell wants a French love poem I ask you). The response to this appears to range from delighted amusement to a general sense that there really is a kind of coherence to be found in it, that out of the noise a signal emerges. There are a few things here which I feel are worth some brief attention.

First, this is a kind of bot-output that is fundamentally self-centered: you enter data about yourself, you get back a thing about yourself. This isn’t new – I was doing quizzes to find out which character from The X-Files I was back in my Livejournal days – and in fact that’s sort of the point; the web by its very nature is extremely well suited to this kind of thing. The thing about this kind of output is that it is at once emotionally positive in nature – or it aims to be – and it functions as a way to see yourself from a slightly different perspective, to see you from the point of view of something which is not quite you, and which supposedly has no biases or agenda regarding what it tells you. This latter acts to enhance the pleasure you’re already deriving from the content of the output itself. It even (possibly a bit tongue-in-cheek) promises to give you a poem which possess significant meaningful meaning in and of itself, with phrases like “analyzing your deepest feelings” and “tracking the data of your inspiration”.

(Data as inspiration is a post in itself, but it is not this one)

In short, this practice is persistent because on a very deep level we like it. It’s a kind of positive reinforcement of pre-existing narcissism (I don’t think that’s all it is, but that’s what I’m focusing on).

But what about the idea of getting signal out of noise? What is it about doing that which might be pleasurable?

A number of people have already drawn a comparison between Poetweet and @Horse_ebooks. As was observed extensively around the time that account was outed as not the result of randomness but something which operated according to the conscious intentions of human beings, we liked the idea that @Horse_ebooks was nothing more than a “mindless” algorithm. We loved the idea that out of noise and chaos could come this: 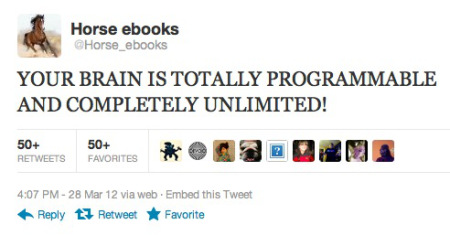 And what was most important about that – at least for a lot of people – was the idea that we could pull coherence out of total incoherence. We find recognizable patterns deeply comforting, and I think we particularly find them comforting when we see them where we don’t expect to. A significant component of delight is surprise.

So I think the same pleasurable emotional process is going on, with some important differences. First, most people’s tweets do make sense, and they are temporally coherent in aggregate, because they are one way in which someone’s own narrative – and self-narrative – emerges, is produced, and is reinforced. So what we have here is not noise, simply an unmanageable amount of coherence.

And what Poetweet does is take that enormous flood of coherence and cut it down to something neat and small, and we get to see what sense comes out of it. Of course there would be sense. There was sense from the beginning.

But the other significant difference is the orientation of the thing. @Horse_ebooks was almost entirely external; we looked at it from the inside out, and while we took what we found and internalized it, it was not a funhouse mirror image of us, at least not in the same way. @Horse_ebooks was about finding a meaningful signal in a universe full of meaningless noise. Poetweet is about finding a single, clear, emotionally positive and aesthetically pleasing signal in a much larger and messier collection of coherent information.

If anything, the removal of content from its context makes it less coherent. Hence the comparison to a funhouse mirror.

So what’s the point? Simply that it’s interesting what people will do to find meaning in themselves and in the world around them, where they’ll go for that meaning, and what they’ll make of that meaning when they find it. It is, for better or worse, something we deeply need. And we very much need to like what we find.

Even human
by Sunny Moraine

That wouldn’t be weird, right?
A Today Totally Didn’t Suck feast
In part of “We Have Always Fought”

Tw for so much general grossness

To the Prevent Cancer Foundation

Sarah is possessed of deep and profound meaning on – where else – Twitter: @dynamicsymmetry

Sarah, interesting post - its an area I have explored, and I wasn't aware of this particular expression before.

Generative art broadly speaking, replaces a portion of human decision making with some sort of autonomous decision making in art production. The goals of such art can be on a continuum of producing new meaning to highlighting entropy, or the lack of meaning to deconstructing the entire art-making project. I suspect its always been a part of art production. So I think it's most accurate to see Poetweet as an example in a long and rich tradition rather than just as mere novelty (which it undoubtedly is).

For my own part, I used a generative process based on atmospheric conditions to explore the idea of digital ruins you have written about in the past. In fact in uses a quote from one of your posts on the subject. The menu bar on Atomic Geography has a link to series of posts based on the decay of Post #74, and then its reformulation into 2 poems produced partly through a rule based approach.

[…] Poetweet: Tiny Meanings in Large Coherence This might be one of my new favorite things on the internet. […]