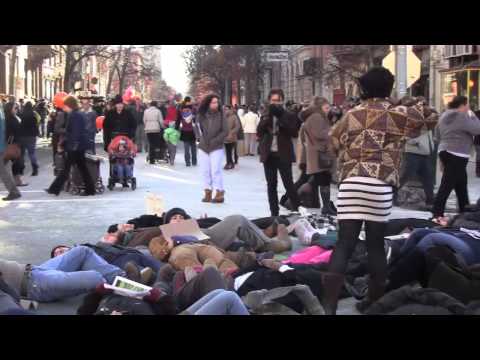 Every year my little city of Troy, New York holds a kind of Dickensonian Renaissance festival called The Victorian Stroll. The Stroll has been going strong for over 30 years and it affords an opportunity for lots of white people to dress up in period clothing that matches the surrounding buildings and ––as some have recently demonstrated–– their retrograde race politics. Even police officers don those funny dome-shaped hats and long wool coats that make it seem as though they’re ready to beat someone up over taking too much gruel. A few really great activists in the area organized a #Shutitdown solidarity event at The Stroll and I was there to capture video. The video above is a nice summary of what we were able to accomplish.

Something that didn’t go into that final video (for obvious reasons) was an angry old white man that started yelling at us towards the end of the march. I was able to get him on camera and I’ve uploaded the clip. At about the 11 second mark you can hear him yell “Where’s Al?!”

It is pretty clear that this guy is asking about Al Sharpton, the American Baptist minister, long time civil rights activist, and stand-in boogey man for racists over the age of 50. Sharpton is a controversial figure for lots of different reasons, but a consistent criticism that has followed him for decades is that he uses tragedy to draw attention to himself and his organization, the National Action Network (NAN), rather than the cause he claims to be supporting.

Yesterday Sharpton and NAN organized an event in Washington DC to coincide with marches all across the country protesting continued police brutality. What happened at that event, as a clickbait site might say, was unbelievable. Activists, many of which have directed attention to protests through faithful live streaming and tweeting, were asked to move away from the stage unless they had a VIP badge. A full collection of tweets, photos, and vines of that injustice can be found here, which also contains an important passage from another blog post by Margaret Kimberly over at the Black Agenda Report. Kimberley writes:

The real reason he is leading this march is to contain black anger and to keep it from spilling outside of proscribed channels of official authority. That is Sharpton’s hustle in a nutshell. His job is to keep black people in line while making it appear that he is leading a popular movement. The subterfuge makes this march in particular a grotesque mockery.

Political wheeling and dealing are inherently incompatible with movement politics. Just two months ago, Sharpton held a lavish birthday party replete with testimonials from politicians and sponsorships from AT&T, Forest City Ratner realty, GE Asset Management, and Walmart among others. The gentrifiers, displacers and political crooks all kissed Sharpton’s ring and that is bad news indeed.’

It makes sense then, that during our action, Sharpton was invoked by an angry old white man. Not just because Sharpton’s protest is one of bad faith corporate grandstanding, but because even that sort of hollow and shallow protest is too much for wide swaths of White America. Even an insubstantial but well-attended demand for justice is grotesque. More saliently though, I think the old white man asking for Al Sharpton says something about the contours and character of protest outside of major metropolitan areas. In a place where 100 people marching is a huge turnout, there is something essentially violent about invoking the name of someone that will naturally and obviously hold an event in the nation’s capital. It at once demands an impossible level of attention that goes beyond the physical bodies located in that geographic area (the marches in DC and New York City combined far outnumber the entire population of Troy) while also accusing us of being the local instantiation of an inhumane capital vector. His utterance not only says activism against institutional racism is the sole province of dupes, it also says something about our inability to even attain that level of seemingly meaningless protest.

There is, indeed a kind of (productive?) tension between small town activism and big city demonstration. While the former may be just as righteous and capable of local change, the latter produces images that are imminently more shareable and self-evidently impressive. In some respects this is nothing new: large metropolitan regions have a long history of being the sites of collective memory generation. Massive civil unrest happens elsewhere, but recorded history generally tells the tales of big population centers. When the very existence of protest outside of global cities is acknowledged, it is mostly to demonstrate just how far the movement has extended from the metropolitan center. It may not be an accurate causal inference but it becomes true through time. They protested in New York City and the energy spread as far as Troy, New York.

Even the locus of this latest round of civil unrest, the St. Louis metro area, is too small to contain its own political energy. Or perhaps “contain” is too mechanical of a metaphor because just as Sharpton appears in Troy through the mouth of an angry old white man, so too do our eyes and cameras instantaneously re-arrange attention such that what might have began in Ferguson is ultimately fought for in New York City. Perhaps it is better to borrow a term from mathematics: Big cities form basins of attraction for attention. Basins of attraction are regions within a system that pull the rest of the network toward a defined attractor. Over time, in some cases, the system evolves to reinforce the central attractor such that it comes to define the entire topography of the network. Just as the old man looking for Sharpton ever-so-slightly nudges attention towards DC, so too does DC attract Sharpton with its readily available attention-paying bodies and attendant capital.

I see the attention parasitism of Sharpton and the sharability of big city protest as different instantiations of the same essential attention economy. Which is not to say that big city activists (that don’t command million-dollar corporate action networks) are vindictive eyeball thieves. Millions of people enthusiastically watching video of thousands of people in the streets fighting injustice is a good thing. But we must also recognize the tensions that exist between this spectacle and its media hinterland. Do we implore live streamers to stay in their home towns? Do we ask activists living in big cities to visit smaller towns at the invitation of local activists? Do we dare subvert this attention topography or do we recognize it and use it to justice’s advantage?

At present I feel unqualified and ill-equipped to suggest positive interventions within this scenario. My only hope is that these observations do a fair job of summarizing the task at hand and offers up purchase points for further analysis and action. It is distinctly possible that nothing need change except our awareness of how attention is still primarily paid to big cities despite the seeming ubiquity of networked cameras.