The Importance of Being Kim Kardashian 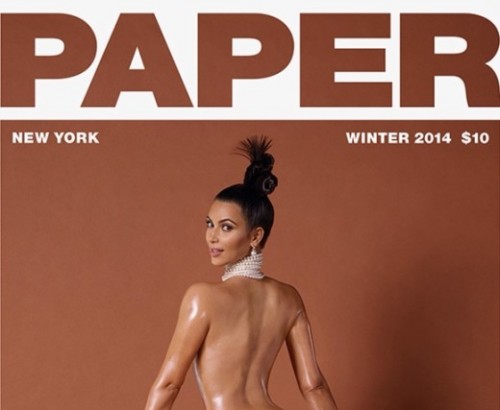 Reflecting on this brouhaha about Kim Kardashian’s recent callipygian escapades reminds me of KK’s powerful role as an image-maker.  In case, somehow, you were able to remain blissfully unaware, earlier this month Kim Kardashian posed for Paper magazine and shared the images on social media under the hashtag #breaktheinternet. The poses consisted of KK in various stages of dishabille.  We first see Kim side view in an evening gown, holding a bottle of champagne. A burst of bubbly arcing over her head to fills a glass tottering on her backside, echoing a 1976 photo in the same pose by the same photographer, Jean-Paul Goude. Next we see Kim happily sliding her gown off, then, smiling disingenuously over one shoulder, pin up style, revealing her famous rump’s rounded orbs. In the final shot, Kim goes the full monty, or, as Entertainment Weekly breathlessly had it, “Kim Kardashian Goes Full-Frontal Naked, Shows Off Boobs and Everything Else In Paper magazine.”

Countless memes morphed her bum into everything from a couple of Krispy Kremes to a fuzzy peach, or, in my personal fave, her backside as the thanksgiving turkey at Norman Rockwell’s classic feast. For a couple of days, there was no avoiding her. After the almost hourly updates from the usual suspects (HuffPo, New York Magazine, and Buzzfeed) began to die down, her shiny cheeks resurged in the news stream, the butt (I’m sorry I couldn’t resist) of a debate over whether the images were photoshopped (the photographer said no, while everyone else seemed to think yes). Even after Paper mag’s editorial director Mickey Boardman admitted to some airbrushing, “to clean things up,” a Buzzfeed headline reading: “Kim Kardashian and Paper Still Haven’t Confirmed Exactly What Was Photoshopped” demonstrated lingering concern.

Why so much anxiety about whether or not the images are “real?” The stakes are high because, for better or worse, Kim is a role model for many women. What that role should be is highly debatable, however. While one woman’s claim that Kim is a feminist made Tracie Egan Morrissey’s brain explode all over her keyboard, the Man Repeller just couldn’t stop talking about Kim as a lightning rod for cultural anxieties about narcissism, feminism, authenticity, and fame. That opinions are all over the map is credit in part to KK’s keen ability to play the image game.

Is she is in on the joke? Yes. Is she the butt of many jokes? Yes. Is she owning the obvious Hottentot Venus reference? Is she playing us all with her frank ambition to stay in the public eye? Her facial expression in the butt-reveal shot, a sly smile, implies that she knows exactly what she—and these images—are doing. Did you not see her face in the photo? Not surprising, as John Paul Goude’s gently massaged depiction of her backside’s grandiose contours demand full attention, making it hard to look away from her tiny waist, flowing into the tremendous curve of cheek.

Her ability to stir the pot rests not just in her passive depiction of a sexualized ideal, but rather her active participation in achieving it. As a “reality” star, her audience needs her to be authentic on some level, and also seeks to be schooled by her ability to appear as if she “comes with a built-in filter of her own” as Amanda Fortini observed in her very smart essay accompanying the Paper pics. Thus, the question is more complicated than whether Kim is a feminist or not. I think an equally urgent question is Kim’s role as a capitalist, or at least how she fits into the needs of contemporary capitalism.

Her well-oiled flanks, firmly sinuous curves, hairless sex, and pneumatic breasts present a near impossible ideal, achieved by intense glamour labor involving lasers, wax, peels, and careful styling and editing. Glamour labor describes the bodywork required to be ready for one’s close up, to make the physical self match the public image of self as closely as possible, in all of its highly edited, filtered, cropped, and enhanced glory. In my forthcoming book, This Year’s Model: Fashion, Media, and the Making of Glamour (NYU Press), I develop the idea of glamour labor to explain the pull for optimization and enhancement in digital culture, where the body becomes a currency with promotional value, limited only by the reach of the platform from which its image is launched. Glamour labor changes with changing imaging technologies.

Work to produce a glamorous vixen for the silver screen differs sharply from the work to produce a potentially viral selfie. KK is the epitome of the Instagram moment. Professedly a regular girl, neither waif thin, nor a mere clothes hangar, her curves take up space in the social media feed, cajoling and informing us of what ‘klassy’ looks like. As KK said herself, “There’s nothing we can do that’s not documented, so why not look your best, and amazing?” KK is many a girls’ hero because she is a ‘reality’ star, with no particular talent beyond looking great, really great, in or out of clothes.

She shows us the work involved, and normalizes it, with breathtaking ethnocentrism, declaring patently unacceptable all who do not subscribe to these tenets of glamour. At the same time, Kim’s naked full frontal is a send up of high fashion’s hidden work to just ‘be’ that way, revealing it for the cover up that it is, the sham of the no filter, “oh I woke up looking this way” myth. Kim’s effortful beauty shows us the reality of looking unreal, and creates a tremendous pull on young women to engage in this effort, thus feeding countless revenue streams. As another pneumatic doll of her times, Dolly Parton, once said, “it costs a lot of money” (and time and effort, I would add) “to look this cheap!”

Elizabeth Wissinger studies and writes about technology, fashion, and bodies. She can be found on Twitter @betsywiss

She is the epitomy of #filter and I applaud her for it, though at times I appreciate the double meaning of #nofilter (does the alternative meaning still pertain?)

[…] The Importance of Being Kim Kardashian […]