When a Gift is Really a Data Breach

Can a gift be a data breach? Lots of Apple product users think so, as evidenced by the strong reaction against the company for their unsolicited syncing of U2’s latest album songs of innocence to 500 million iCloud accounts. Although part of the negative reaction stems from differences of musical taste, what Apple shared with customers seems less important than the fact that they put content on user accounts at all. 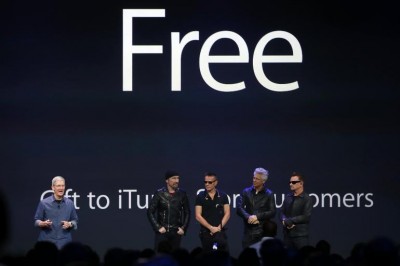 With a proverbial expectant smile, Apple gifted the album’s 11 songs to unsuspecting users. A promotional move, this was timed with the launch of the iPhone6 and Apple iWatch. And much like teenagers who find that their parents spent the day reorganizing their bedrooms, some customers found the move invasive rather than generous.

Sarah Wanenchack has done some great work on this blog with regards to device ownership—or more precisely, our increasing lack of ownership over the devices that we buy. That Apple can, without user permission, add content to our devices, highlights this lack of ownership. Music is personal. Devices are personal. And they should be. We bought them with our own money. And yet, these devices remain accessible to the company from which they came; they remain alterable; they remain—despite a monetary transaction that generally implies buyer ownership—nonetheless shared. And this, for some people, is offensive.

It is also a breach of privacy. Users produce data, but they also consume data. I’m sure for most people, and certainly for the decision makers at Apple, giving people music seems far less insidious than selling people’s information. But Just as opt-out models of user-data sharing, mining, and sales expose customers’ productive labor and personal information to unexpected parties in unexpected ways, opt-out models of data-gifting infiltrate customers’ private consumptive spaces.

Admittedly, the exposure in this case is mainly just inconvenient. At worst, those who aren’t fans of U2’s music made an appalled face as they found their playlist infiltrated by an unappealing sound.

But if we push this, and think about what Apple did with this gift, the act itself becomes worrisome, if not surprising. If they can put this content into one’s collection, they can put other content in too. Putting content in means entering, uninvited, into a presumably private realm. The space, in short, was never yours.

I leave you now with 2 gifts of my own:

1.) Link to remove U2 album (if you are so inclined): https://buy.itunes.apple.com/WebObjects/MZFinance.woa/wa/offerOptOut 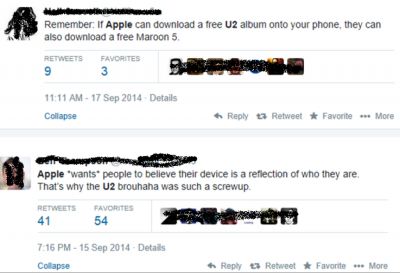 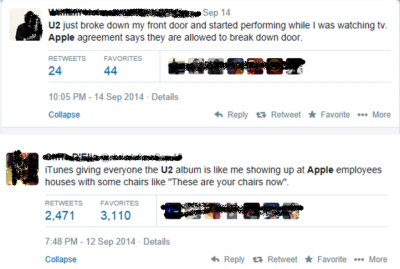 Nothing to add on the substance of the post, but I find it interesting that you redacted the twitter handles from the tweets, as well as whatever the square images are beneath each one (not a twitter user, so I don't know what they are). Since these were public tweets, what is the rationale for redacting?

Yes, that would be an interesting topic. Here's a related issue:

About six years ago, I stumbled onto a classroom blogge run by a teacher that also published posts by the high school students. I forget exactly why, but I thought the teacher was completely fuckeing uppe pedagogically with how he was running the blogge. So I posted about it on my own blogge, linking to the classroom blogge. The teacher had link backs enabled, so he and his students saw the link to my critical post. My blogge contains a lot of frank colorful language.

Maybe you can guess where this is going. The teacher went ballistic that his students were being exposed in his classroom to "foul language". He repeatedly commented on my blogge and e-mailed me demanding that I delete links to the classroom blogge and not link to it again. He threatened to "report me to the authorities", maybe the Internet police?

At the time, I just kept mocking him for misunderstanding how linking on the Internet works and that if he didn't want his students to see link backs, he could turn them off in WordPress. Now I think my views are more nuanced.

But it does raise the interesting question whether the act of linking to a Web page creates any ethical obligations whatsoever to the page you link to. With Google search and rank of a Web page based in part on the content of other pages that link to it, there does seem to be an argument.

Why I Black Out Twitter Handles on Blog Posts » Cyborgology — September 23, 2014

[…] this content. Last week, I posted some tweets with the names and images redacted. A reader commented on my post to ask why I did so, given that the tweets were public. We had a quick discussion, but, […]