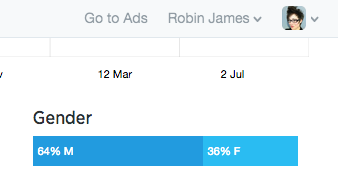 Twitter recently made analytics available for free to all users. One of the free metrics is the gender distribution of your followers. This metric is flawed in a lot of ways (most obviously because it’s binary: there are only men and women). Most puzzling, however, is how Twitter determines a an account-holder’s gender. Users don’t have to self-identify–in fact, there’s not even an option to do this.

As both this post about the gender metric and this post from Twitter about its gender-targeted marketing show, Twitter treats gender as an emergent pattern of behavior. As the latter explains, users are thought to send “signals”–such as “user profile names or the accounts she or he follows”–that “have proven effective in inferring gender.”

Classically, one’s body (physiology, phenotype) was the ‘signal’ from which one inferred gendered (or raced) behavior: vagina = nurturing, scrotum = likes video games. In this model, gender is a fixed characteristic inherent in sexed bodies. The kind of body you had determined the patterns of behavior you exhibited.

Twitter’s approach to gender is an example of a broader shift in our understanding of gender (and social identities more generally): genders are not fixed characteristics, but emergent properties. This understanding of gender is different than the traditional one, but it’s not clear that it’s any better. For example, we only recognize something as a pattern if it resonates with other patterns we’ve been habituated to recognize as such (what Reich describes here as “rational” moments). Twitter isn’t crunching numbers to figure out what different kinds of gender patterns people follow; rather, they’re listening for users who fall in phase with already-set “masculine” and “feminine” vibes. (As they say, “where we can’t predict gender reliably, we don’t.”) To count and be treated as a full person/user, you have to exhibit legibly gendered patterns of behavior. Otherwise, you’re effectively non-existent, just irrational noise.
To close with an aside: Has anyone written about the relationship between these gender-predicting algorithms and the parlour game on which Turing based his test? The game was about determining whether or not one’s interlocutor was a woman.

[…] of my most successful posts this year were On Twitter’s Gender Metric & Femininity As Technology. When I wrote them, thought the argument I was making was so obvious […]