Animating the Ladies: Ubisoft fundamentally doesn’t get it 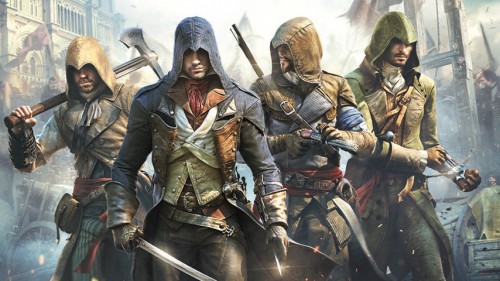 Always fun when a game publisher doesn’t appear to know anything about games. Or gamers. Or publishing games. Or making games. Or stories. Or history. Or much of anything pertinent to what it’s actually supposed to be doing.

Yesterday, Ubisoft technical director James Therien commented on the lack of a playable female lead character (and before I continue let me note that I reeeeeeally don’t like how binary/trans-exclusionary this discussion has been) in the co-op play for the forthcoming Assassin’s Creed Unity with the explanation that it’s just too much work to do all those extra lady animations and voices. The Internet, as one might imagine, did not respond well.

That is such a shame that women can’t be animated. That means there will never be a Tomb Raider game! @Ubisoft

Women are hard to put in games because our chitinous exoskeletons refract light in ways that render us invisible to the naked eye. #ubisoft

“Female bone structure is just different,” says Joe Ubisoft. “Are there spiders in there? We just don’t know.”

Animating men is easy but women? Pssh. The boobs are like, millions of dollars to get those things right because I’m pretty sure they don’t work according to physics? They’re like, ghost spheres or demon orbs. And don’t even get me started on vaginas. What even are vaginas? Where are they? Do they have powers?

Some of these quotes are here simply because it amuses me to include them, but there are additional technical aspects to this. Social-justice/diversity-minded gamers didn’t buy Therien’s explanation, but neither did some other developers. Ansh Patel of Narcissist Reality explicitly denied Therien’s claims about the difficulty and resources that would be needed to include a playable female character:

Animation and modelling a playable character doesn’t require as much commitment and costs as Ubisoft says. In fact, a trend among many indie developers looking to cut on time and costs is to use the same rig (skeleton) for the model to create a common set of animations for both the male and female characters. Just wanted to call out Ubisoft because their ridiculous excuse doesn’t make any sense even from the developer perspective. It clearly seems driven by a marketing decision, which is extremely unfortunate.

No one is surprised at this point when sexism pops up in the video game industry. Like the film industry, sexism is deeply entrenched in both the culture and the institutional structure, in the way things are made and sold and in the actual demographic makeup of who’s doing the making and the selling. There are incremental steps forward, but for the most part things like this remain the norm rather than the exception. But as Mattie Brice pointed out on Twitter, there needs to be a distinction here between designers/developers and the publisher guys who are indeed primarily marketing-focused (and, given that approximately half the gamer market is women, appear to either be working with very bad data or to have no idea how to interpret it intelligently) and are holding all the purse strings:

Why are we calling out artists and not the people who told that artist no women main characters??

BTW artist = dev to me, you can blame the lead designer or producer or whatever, it’s who controls the money that controls the game

‘minorities don’t sell’ 1. is only an argument for people who want to maximize profits 2. is taught to devs from non-devs

After a day of this, Ubisoft responded with – I’m heavily paraphrasing – “We have lots of Strong Female Non-Playable Characters in the game and this was all for story reasons and we care about diversity so be quiet”.  Which not only does nothing whatsoever to address the statement that caused all the problems, but also – and here after 600 words I finally meander to my point – betrays a complete lack of understanding of what video games are, how representation works within them, and what it means to play one.

Video games are increasingly technological vectors for storytelling as much as they are stats-oriented shooty/swordy things. Some of this storytelling is extremely rich and complex. Many players play for the story as much as they do for the mechanics. But games are not books, and they are not movies. There is participation, in the world and in the unfolding of the story, and that participation is only possible in this specific kind of technologically mediated narrative. And that participatory aspect has major implications for how players engage with the gameworld.

A player makes choices, and interprets the meaning of those choices. Even if the story is relatively linear – even if there isn’t much of a deep story at all – a player feels as if they’re doing a great deal to drive the action. It’s not fair to say that a player actually thinks of themselves as the character they’re controlling, but there is a connection there and it’s a deep one. Most of us roleplay from our earliest days of complex play. This form of gaming is a kind of digital let’s-pretend – and it’s not even isolated to video games – and the face you wear matters.

Straight white able-bodied cisgender men, of course, don’t tend to notice this, because for the most part they get to play characters that look just like them, demographically speaking. But other people – people of color, women, trans people, people with disabilities, queer folks of all kinds – we can’t not notice all the white cis-male playable protagonists. And it affects how we engage with these worlds and these stories.

There are absolutely similar things going on with representation in books, TV, and film. But again, I argue that games are functionally different in some important ways, and that how this stuff matters is different as well.

Others – and me – have written about the experience of playing as Ellie in The Last of Us, especially in the downloadable package Left Behind. In that latter (sorta spoiler alert) it’s revealed that Ellie is queer – a queer teenage girl, no less – and speaking for myself, I can’t begin to describe what a deeply affirming experience that was. It was fulfilling because I got to watch the story unfold, but also because I felt like I got to be part of that story, like I got to look at the gameworld through the eyes of someone with whom I have a lot more in common than all the gun-toting square-jawed dudes I’ve been playing for years. For me, it was one of those things of which you don’t viscerally realize the meaning until you personally experience a different way of doing it.

There are plenty of smaller indie games that do all of this, and more, and they get overlooked way too much of the time. But for a big mainstream release, representation and visibility are naturally going to have more of a general impact.

So it’s frustrating, to say the least, to have a publisher like Ubisoft respond to very legitimate concerns with “there are Strong Female Characters, you just don’t play them is all” like that should be good enough to placate.

It’s not just this game, is the thing. It’s most big-name games, and it’s the persistence of a complete lack of understanding on the part of the people with the money and the marketing departments regarding how the stuff they publish actually works.

If you’re going to sell technology, it really helps to understand that technology. Just sayin’.

Ubisoft isn't in the business of making video games to not make money. If they don't see the market demographic of people who want to play as female characters as large enough (or spendy enough) to warrant the extra investment on their part, that's fine, they don't have to cave to the vocal minorities demands. As a vocal minority, I'm glad to see people shouting down the unintended message this might portray however
As a paradigm shift, I don't see many men complaining that Cosmopolitan doesn't include enough hairstyling advice for their short hair cuts.

Everything you write is right. Yet I'd like to add that it's also a mistake to assume that only female gamers care about playable women.

Publishers also tried pushing Naughty Dog to NOT have Ellie be the main character in the coverart for The Last of Us, arguing that it wouldn't sell, luckily Naughty Dog refused to change it:

Of course we know how well -that- prediction held up: The Last Of Us went on to become the best-selling title of the year, and to hold onto that title until GTA-V came out near the end of the year, before ending up as the 2nd-most-sold game of 2013.

Clearly people are not buying games where women are more than decoration.

[…] Animating the Ladies: Ubisoft fundamentally doesn’t get it […]

Sarah, you are criticizing Ubisoft for not making as much money as they could be making, despite all the money they're making. It's hard to argue with success when there isn't anything more successful to compare it to.

Once you start to get that broader audience playing, then you make sure that your game will be representative of the audience that might play it in the next version. So if 10% of your audience is female, then one of 10 controllable characters should be women. The same goes for race. Show the real user audience demographics, and the company might be more willing to represent that audience.

Eh? Lots of women love shooters and lots of women love AC. As more and more women grow up with games, you'll only see more playing similar games. The ONLY reason more men play games than women (excluding casual games) is that more of their parents bought them games. That's it. Internalized stereotypes. So in short, these devs are wildly shortsighted.

[…] + Animating the Ladies: Ubisoft fundamentally doesn’t get it […]