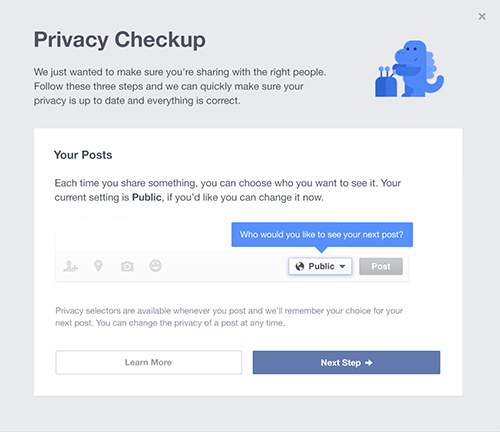 Today, Facebook announced some significant changes in its approach to privacy: New users now start with “friends only” as their default share setting and a new “Privacy Checkup” will remind users to select audiences for their posts (if they don’t, it will also default to “friends only”).

This announcement is significant in that it is the first time that Facebook has ever stepped back its privacy settings to be less open by default. This appears to contradict a widely held assumption that Facebook is on a linear trajectory to encourage ever more sharing with ever more people. Media reports have pitched this as a victory for users, who are supposed to have forced the company to “respond to business pressures and longstanding concerns” or “bow to pressure.”

Facebook, itself, presented the changes as a reaction to user feedback:

While some people want to post to everyone, others have told us that they are more comfortable sharing with a smaller group, like just their friends. We recognize that it is much worse for someone to accidentally share with everyone when they actually meant to share just with friends, compared with the reverse.

But the narrative that Facebook is responding to consumer demands conceals what I believe is a deeper philosophical shift within the company–but one that is still fundamentally rooted in self-interested profit-seeking. Facebook’s revenue primarily derived from delivering targeted ads to users. The more information Facebook has about a user, the more effectively it can target these ads, and the more marketers will pay for this service. So, Facebook has a vested interest in maximizing how much information each user shares.

Historically, Facebook–like so much of Silicon Valley (as well as news media and researchers)–has operated with the simplistic belief that less privacy equals more sharing. Specifically, Facebook believed that when people speak to the broadest possible audience, they generate the most interaction and, therefore, maximize sharing. Facebook once sought to instigate a cultural shift that would see people come to accept speaking to and sharing with a mass audience as the new normal. They did so, in part, by making the site’s design difficult enough to navigate that many people determined that managing privacy wasn’t worth the effort.

What Facebook seems to have finally realized is that when people conceal more they also reveal more. Nathan Jurgenson observed this co-implicated relationship in an essay on this site, saying:

“Publicity” on social media needs to be understood fundamentally as an act rife also with its conceptual opposite: creativity and concealment.

In the absence of effective privacy controls (and the concealment they provide), Facebook has become plagued with a phenomenon known as “context collapse,” which, occurs when the various roles one performs and the audience one performs them for collide and contradict. Jenny Davis describes the cause of this phenomenon:

Social actors hold many roles throughout the life course and simultaneously at any given moment within the life course. For instance, one may be a mother, sister, athlete, student, and exotic dancer. For each role, the social actor maintains particular identity meanings guiding who s/he is, and a network of others who (typically) share these expectations. Although the expectations across roles may coincide neatly, it is most often the case that each role bears slightly different meanings, and in some cases, highly contradictory ones.

Context collapse often results in a “lowest common denominator approach” to sharing, meaning that a user shares only what they believe is appropriate for all potential audiences, which doesn’t tend to be very much–or, at least, not very much of interest.

In order to get people to start sharing more interesting and valuable information (that it can sell for more money) Facebook has had to reinvent itself so that users perceive it to be affording greater privacy and concealment of information. As Nathan suggested in the previously mentioned essay, sharing is seldom interesting when it’s obscene–the term Jean Baudrillard used to describe the drive to fully reveal and expose a thing. Instead, sharing is most often a process of seduction–“of strategically withholding in order to create magical and enchanted interest.” This process can be likened to a burlesque performer’s fan dance, which simultaneously exposes and obscures from view.

But, just because Facebook has wised up to the way that sharing involves both revelation and concealment, doesn’t necessarily mean that it’s become more responsive to users or has taken users’ concerns and interests to heart. Instead, what we’re seeing is a new, more sophisticated approach to exploiting users and further transforming them profit centers. Facebook hasn’t reformed; it’s redeployed. Facebook’s principle goal remains to influence and direct users into activities that boost its bottom line, and, today, it got a little better at doing just that.

PJ Rey (@pjrey) is a sociology PhD candidate at the University of Maryland.