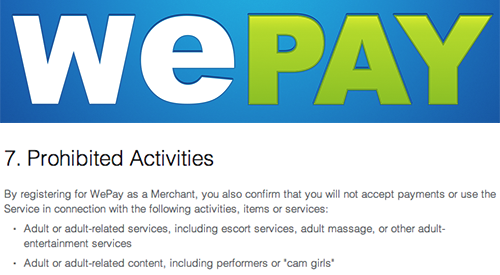 Last week I wrote about how–despite their supposed libertarian principles–Wall Street and Silicon Valley firms (most notably, Chase and Amazon) had embarked on systematic campaigns of discrimination against sex workers, seemingly intent on expelling sex workers from the financial system. I concluded that discrimination propelled by market forces is no less reprehensible and no less deleterious in its consequences than discrimination driven by personal prejudice. And, I argued that we should hold accountable those who let a commitment to profit trump their commitment to fighting discrimination. 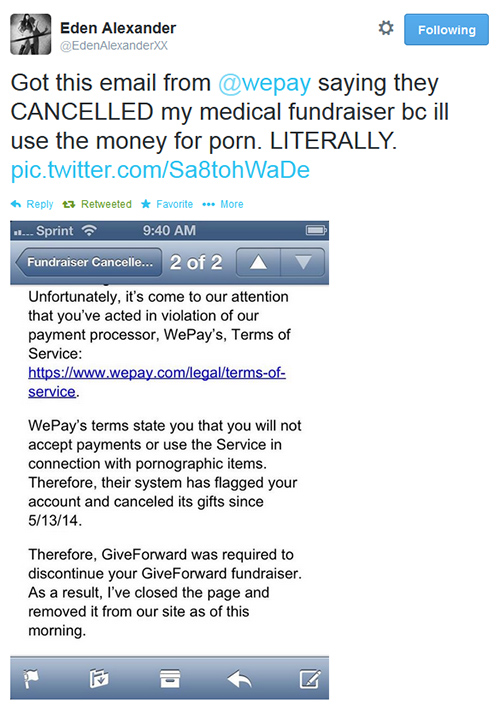 In pain and apparently shaken by the termination of what had seemed like her best hope to get care, Alexander made several disconcerting tweets then ceased communicating altogether. All indications are that she attempted or was close to attempting suicide and was taken away by paramedics.

WePay’s CEO Bill Clerico took to Twitter to respond to the situation and, within a few hours, an official explanation was posted to the site (though, in a weird corporate-y way, it seems to assume that the text is being read on Monday and not the day it was posted): 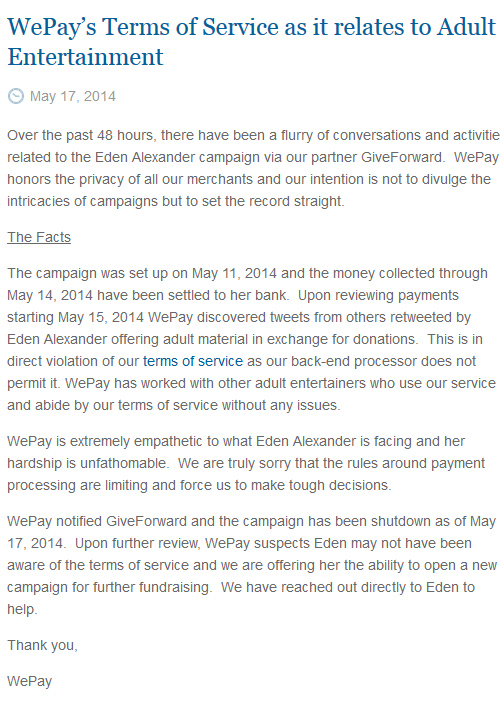 Note that Alexander did not, herself, tweet anything that violated WePay’s terms of service (which, in any case, discriminates against even legal sex work). This decision relies on the least generous possible interpretation of the facts, going against convention and assuming retweets to be endorsements. Moreover, the decision was, purportedly, based soley on communications external to WePay’s site.

Though they have responded to all the negative publicity* by transferring the original donations to Eden’s bank an by offering to help Eden restart her campaign (help which was, understandably, declined by Eden’s friends and supporters), WePay deflected blame for the incident to “back-end processors.” So who are these mysterious back-end boogie men who force WePay to so aggressively discriminate against sex workers. Clerico explained that these “processors” are card associations such as Visa and Mastercard [edit: Fruzsina Eördögh reported in VICE that a company called Vantiv is the processor responsible for pressuring WePay]: 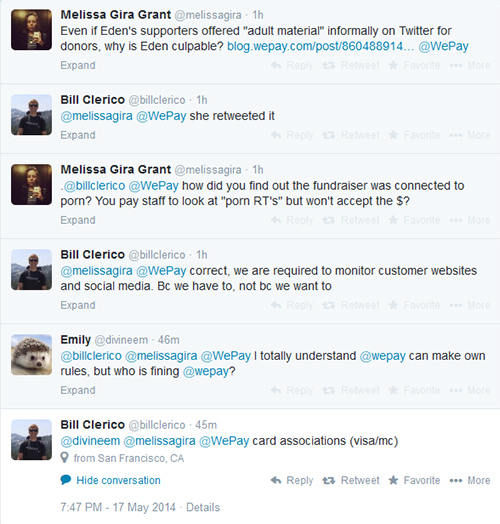 Clerico also equivocated a bit, saying that not all WePay’s limitations on users were demanded by card associations: “Some are because they are prone to fraud or abuse.”

WePay’s response, predictably, amounts to the old “don’t blame us, blame the market” strategy of denying responsibility. This is the same pattern we recently witnessed with Paypal and Chase: Rather than working to find ways to conduct business without discrimination, execs shrug their shoulders and point to the markets as supposed justification for what, in this case, is not only unjust, but downright inhumane, treatment. We, the public, are expected to just resign our democratic values when the market deems them inconvenient.

Fuck that. The discriminatory practices of a back-end processor and concerns about fraud do not and will not ever justify denying medical care to a very real human being, regardless of her occupation.

What is perhaps most shocking about this tragedy is that it illustrates how readily we dehumanize sex workers. Whether it is the doctor (who reportedly dismissed the severity Alexander’s condition, assuming it to be the product of drug abuse) or WePay shutting down her donations page because she is connected to the production pornographic content, institutional policies and practices reduced Alexander (as they do all sex workers) to being nothing more than her work. Unfortunately, this too often how stigma works. From the perspective of this institutionalized stigma, you can’t be a sex worker and a person in need of medical treatment because when you’re a sex worker, you are only a sex worker. A person’s humanity is flattened and they are seen only as their stigma. This is an observation that Kitty Stryker and Melissa Gira Grant both made pointedly:

What market logic does–when we fail to intervene demanding that humanitarian values be respected–is to reduce humans to mere risks and opportunities. Risk is stigma in market terms. Both flatten a person and mark them for exclusion. When a CEO says “sex workers are a risk,” they always, implicitly, mean “a risk–and nothing more.” The purpose of such language is to depersonalize and dehumanize and, thereby, to remove the moral impediments to exclusion.

What we, collectively, need to do is present new impediments to exclusion–to create conditions where exclusion itself is risky business. I know I, for one, won’t be using WePay any time soon for any of my projects.

(A new fund has been established for Eden Alexander. Make a donation here.)

PJ Rey (@pjrey) is a sociology PhD candidate at the University of Maryland.

* In response to Tauriq Moosa’s article in the Daily Beast, WePay states:

I thought it was pretty clear from the context that the retweets were endorsements.

Instead of making things riskier, how about ideas on how to reduce fraud in the industry?

Not Waving, But Drowning: How WePay Failed Eden Alexander | Miss Kitty Stryker — May 17, 2014

How is the sex workers fault when someone else commits the crime? Why should they be punished & persecuted for something they didn't do?

They don't shut down Amazon or Walmart or any other big name corporation when fraud is done by someone to their companies.

[…] bases. Coverage of the incident showed up on Gawker and The Rumpus, in blog posts by feminists and sociologists. Thanks to Molly Crabapple’s strong influence across Geek Twitter, Patton Oswalt tweeted […]

@Cathy: Actually, it *IS* a market issue, because:

1) The government is basically ruled BY corporations who use government to impose their own personal moral biases on their customers;

and 2) The very nature of "markets" is to serve those who have the most money and resources; and sex workers tend to have neither the money nor the resources to counter the economic strength of organized religion or elite authoritarian feminism. Corporations are thusly free to impose their social mores on those they serve, or simply refuse to serve certain black-balled sectors; and persuade government to reinforce those biases.

Operation Choke Point may be a passing vehicle for the corporations to justify their actions, but it is not the sole factor. Banks were denying support to adult transactions even before the DoJ intervened.

Also....there is a difference between targeting legal consensual acts/actors/transactions that harm no one, and payday loansharks offering 400% interest loans online to permanently bind working people into permanent debt service for basic essentials.

[…] 17th); the Rumpus article appeared early that afternoon, and was followed by a number of others on various blogs and news sources.  Even the Daily Mail picked it up, though in typical Mail fashion the story […]