Consider this a PSA for the #TtW14 participants, for whom I have so much respect and admiration. Please, you smart and wonderful people, refrain from using “seminal” as a metaphor for foundational ideas. 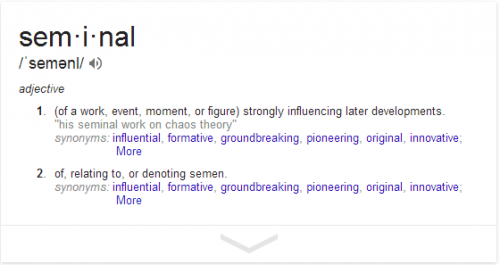 Yes, “seminal” refers simultaneously to groundbreaking intellectual work and male bodily fluids expelled at the peak of sexual excitement.  First, the metaphor doesn’t even entirely make sense. Although the work, like the fluid, is a seed, to earn the seminal descriptor, a work has to have grown into something rich and complex.  It cannot, as semen is wont to do, shoot into an unreceptive environment where it is wiped away, left to quickly die, and ultimately forgotten. Moreover, the metaphor is downright vulgar.  It evokes (at least for me) the image of some dude splooging his ideas all over everything. Finally, and most importantly, the metaphor is blatantly sexist.

To refer to something as “seminal” is equivalent to the compulsory use of the masculine pronoun “he” when one really means “person.” The compulsory “he” has long fallen out of favor (though what “he” should be replaced with is a debate in itself, but I digress), and yet “seminal” persists as an integral part of speech and writing.  I’ve heard some very strident feminists refer to Judith Butler’s work as “seminal.” I mean, really!? Judith Butler!?

If we take seriously the idea that scholarship and social justice are interwoven projects, it is important that we always reflect—self critically—upon how we communicate scholarly ideas. If and when we do so in ways that perpetuate inequalities or marginalization, we should recognize and alter our linguistic choices.  In this spirit, I searched my own dropbox (which goes back several years, and contains most of the things I’ve written as a professional sociologist) for the word “seminal.” The search came back with a count of 99. That’s right, I have 99 seminals and most of them are mine[i].   Luckily, a few years ago a respected colleague pointed me in the right direction regarding my (apparent over) use of the term.

I bring this up not to call anyone out or make them feel bad. I bring it up to help us, as a conscientious community, speak and write more conscientiously. I am posting it before the #TtW14 conference in hopes of minimizing uncritical semen references as we move through the weekend. Of course, I realize that not everyone reads the blog regularly, and even those who do may miss this particular post. So if someone leaks some semen into their talk[ii] please be gracious.  Presenting in front of a group of people is generally terrifying, and I certainly don’t want to be responsible for detracting from the exchange of ideas. But, if you do read this, please don’t say seminal. If you hear someone else say it, ask them more about their project, compliment their work, and, if it feels right, gently question their use of the term.

For those of you who now have to rewrite a portion of your paper, here are some alternatives:

[i] To be fair, not all of them are mine. Some of the documents in my dropbox were written by others, including ahem, people who submitted abstracts to #TtW14. But still, 99 is a lot of seminal.

[ii] I’m sorry for that terrible but entirely intentional pun.

Can a word not leave it's gendered past behind?

Seminal is from the Latin "semen" which means seed, not sperm. Sperm have also been called seed (thus semen) but surely the root meaning here is SEED not sperm and there is nothing sexist about seeds. It had never occurred to me that seminal had anything to so with sperm or masculinity - and I love the metaphor of research or theories being like seeds of ideas that grow into great trees or plants or bushes or whatever.

I really don't think we should ban a word or declare it sexist just because it can be misunderstood as having to do with sperm. How about taking back language instead and explaining, when we use a word like seminal, that the sem in seminal, as in dissemination, semiotics etc comes from
seeds which CAN be spread out in the wind and find a space to grow in unexpected places.

I think Jill Walker Rettberg's comment is spot on.

I'd only add: Don't think seminal is sexist, it's scientistic. You make the choice every day to decide whether scientific discourse controls the proper use and reception of language. Or, ironically, as Davis puts it, "it is important that we always reflect—self critically—upon how we communicate scholarly ideas." Thinking "seminal" has to do primarily with sperm is deciding that biological use of "seminal," e.g., "seminal fluid," is more important than all other uses over the course of history. In the history of "seminal," the Latin gender neutered term meaning "pertaining to seed" is the seminal use of the word. It Grew into an Offshoot pertaining to sperm over 1500 years later, an Offshoot of the Root meaning Fertilized and Staked Out by the Budding field of Biological Science. So much of our patriarchal society uncritically accepts scientific discourse and its objectivity disguise as the authoritative discourse. How about we reclaim "seminal" from science?

Interesting that on Urban Dictionary the word has 4x as many down votes as up votes; and yet no alternative definition was offered. Is that a cultural divide or a more popular definition of the word?

So many negative comments on this thread (some not displayed because they don't follow our comment guidelines).

I doubt that many people really have a strong emotional attachment to the word "seminal," so I have to wonder whether some flawed, non-self-critical logic is (unconsciously?) at play, in this form:

I don't think the historical origin of a word is salient in a conversation about sexism. What matters most is how people experience/interpret the word today. I believe commentators when the say they never made masculine associations with the word "seminal," but if many women do and they feel uncomfortable with it, are we really going to tell them they are wrong? Doesn't this sort of delegitimization of those women's experiences echo patriarchy?

How about if we use it like this: "their ideas were seminal in that they were unable to produce any more ideas for quite some time" or "the work was seminal in that its author was embarrassed about the stains it left on the author's bedsheets."

My colleague uses the term "ovumnal"; perhaps better than ovulary.

So my big question, in response to a lot of this push back, is what are people defending? This speaks to PJs point above. I would tweak his point a bit, though. The previous non-association between masculinity and the term "seminal" is not benign. Similar to the ableist use of "lame," privileged structures are built into language practices. That they are not readily apparent is a sign of their embedeness, not their irrelevance. .

Even if "seminal" meant "semen-like," what is the problem with using semen as a metaphor? Semen is a bodily fluid that contains "seeds of life," which can either take hold or misfire. Semen is not an sentient substance with a political agenda. Even as a synecdoche for men or maleness, it can still be a metaphor- women have masculine energies, if one wants to call it that, just as men have feminine energies. Again, all of this is a metaphor . . .

Additionally, the egg waits for something to come to it- it does not go out into the world seeking its fortune. If I, as a woman, am putting important ideas out into the world, that is far more semen-al than ovulary. I am firing off something outside of myself, hoping it lands in a good place and makes a growing impact.

Male writers can say that they are brooding over something, or that they have given birth to an idea - should they refrain from saying that?

The human body is a rich linguistic source of metaphor and meaning, and I would rather see all of it up for grabs by anybody.

hmmmm what if instead of trying to create a (subculture-based) taboo around "seminal" we instead tried to repurpose the word toward the second meaning, using "seminal" as a means of describing the weakness and awkwardness associated with semen. "after her seminal work, she was unable to produce more work for a little while" or even "he was embarrassed that his dad had seen the wadded-up papers by his bed covered in his seminal work." reappropriate a problematic association!

Ovaries don't do much on their own, either, and the fate of unused ones is no less glamorous.

So if you're gonna have Ovulary you have to keep Seminal. Preferably in conjunction.

"The original seminal idea led to the ovulary work that germinated a fertile field of inquiry... "

As someone who has studied a fair amount of Latin, I agree with Jill Walker Rettberg. I don't see anything sexist in the word.

This is a great post. As typical, the comment section is disappointing and mundane. None of these folks even begin to grasp the concept they may have internalized misogyny, or that because /they/ don't see a problem it must not be there, or whatever. Severe lack of critical thinking skills being demonstrated. Brava to Cyborgology content creators!

What's your view on the adjective "testy"? Do you think it's acceptable, or is it a little too cozy, homophonically, with the man parts to pass muster?

Seminal is still Sexist: A Response to the Critics » Cyborgology — April 29, 2014

[…] week, I posted a short PSA for Theorizing the Web participants regarding the word “seminal” as a metaphor for foundational […]

Seems like comparison between the all but ubiquitous he/person grammar with the seldom used SAT word seminal is strained unless one is operating under the (non-existent) omnipotent Sapir–Whorf hypothesis.

I'm on board with the idea that our language reveals and reinforces biases, but it does so through systems not occasional use of a relatively esoteric gendered diction choices (an idea that a count of times 'seminal' is used in a unrepresentative sample of unknown size does little to dispel).

When I've used the word seminal, or heard others using it, I've only ever considered it as encompassing the entire process of creation from conception to birth. When I describe an album as seminal I am thinking of the album as the 'emission' and the "strong influence it had on later developments" as the birth. The time in between (i.e. the release of the album until it's judgment as being seminal) I think of the gestational period. So, for me, it is not a gender specific word at all it simply refers to the first step in a process.

If I were to think of it as being a gendered word I word still be confused as to how it is sexist unless you are arguing that using gendered words by default is sexist. But this I would not accept.

"Seminal" is over-used and is pretentious. Many writers use it as a non-specific term of approval for the theory or result on offer.

For those who wish to use non-sexist language and maintain the biological metaphor, the correct non-gender-specific noun is "gamete". Go forth and coin your own word. Gametophoric? Gametogenous?

[…] to Jenny Davis, an Assistant Professor of Sociology at James Madison University, use of the word […]

Are there still academic blogs that have active discussions in the comments? | jill/txt — May 4, 2014

[…] but there are very few comments there – with the recent heated discussions on the posts about “seminal” being a sexist word being exceptions. danah boyd gets some comments, not too many (the post about the Oculus Rift being […]