@YesYoureRacist: We can do better

Like many Americans, I spent Sunday evening watching the Super Bowl. This entailed tasty snacks, a comfy couch, and lots of head shaking because, well, the Denver Broncos. It also involved Facebook and Twitter. The day of, day before, and day after were full of commentary, predictions, snarkiness, and declarations of various sorts. Indeed, Sunday’s Super Bowl, like all media events, incorporated multiple media.  One item, within one piece of this media ecology, keenly sparked my interest: The Twitter feed of @YesYoureRacist.

The Super Bowl commercials are as much a part of the spectacle as the game itself. Two ads in particular garnered a lot of attention on social media.  One was Coca-Cola’s multi-lingual rendering of “America the Beautiful.” Another was the second in a series of Cheerios commercials featuring an interracial family.

Naturally, people responded to these advertisements in racist ways. And Logan Smith, who operates the Twitter handle @YesYoureRacist collected and shared all of the transgressions he could find.  For example: 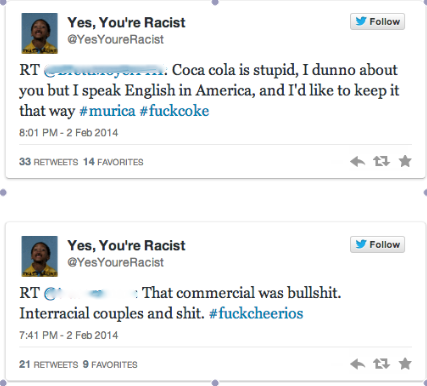 The logic behind @YesYoureRacist is a simple shaming ritual. It takes individual racist locutions, highlights them, and publicly heckles to speaker. To be sure, the things these people say are racist. In fact, the things these people say are downright asshole-ish. But I don’t believe that personal, public shaming is the most effective antiracist strategy. First, though well intentioned, the practice is a little asshole-ish in its own right. Second, and more importantly, the strategy of public shaming may be counterproductive to the larger project of fostering race consciousness.

Publicly shaming those who espouse overtly racist statements is useful in reminding the collective “us” that race-based judgments are still prevalent, and that whites are still the privileged class. However, it also firmly locates racism in the safe ideological space of individualism, perpetuating the false belief that racism can be eradicated, if only we could educate those un-evolved, uneducated, backward thinking, racist individuals.

In the meanwhile, “we” can use these ignorant racists as an alter against which to define ourselves. Slowly shaking our heads, wearing our most concerned expressions, wondering (always out loud) how such antiquated thinking can still exist in 2014.

Bonilla-Silva famously writes about racism without racists. He shows how racism persists alongside colorblind rhetorics. This racism without racists facilitates personal disidentification with racial realities and affords racist citizens the liberty to divorce themselves from complicity within a racially unjust system. This hinges on individualist conceptions of race relations.

The kind of individualist framing inherent in shaming endeavors, though it certainly highlights the existence of deeply racist people, simultaneously hides the ways that racism is a key structural component of American culture, infiltrating its institutions, organizations, and citizens. This is detrimental to the larger antiracist project.

[…] In @YesYoureRacist: We Can do Better, Jenny Davis covers the Coca-Cola commercial that stirred up a ton of racist remarks, Twitter’s […]

I will forget explaining my opinion on the low level meta-thinking of bringing up FREEDOM OF SPEECH and its tie to neoliberalism.

On the other side of the coin,
Many normal Americans witness these "disproportionate" stuffs at a thought level not quite up to speed with you or I, or other educated folk. To add to that, usually from my experience more men and more non-humanities related educated people react in a way like this OUTWARDLY. I mean think of basic science principles of being "aware" and "perceiving" the variable of an environment. Most people intuitively make claims of what they value and some times it is superficial and most likely out of fear of what the 'I' really is at a so and so moment.

I feel like it is backward and sort of hypocritical to label, as you do, a privileged class of any. How and who is to say what privileged is? Yes money or class or the other "disproportionate" things (in facts) may bring these "underprivileged", as I will say because I'm into the naming LABELING things now, up to speed or level-all-out so to say.

Your last paragraph about individual shaming was said very well and spoke to me in an inspiring tone actually. I believe the only way is to FORGIVE others; provide them with compassion and an open heart. And teach by showing and acting as a leader with an OPEN HEART and OPEN EYES that Listen.

It was only not a century ago that our civil rights were improved for the better of not only African Americans but for all-of-us. Freeing "under privileged" frees us-ALL. We do this by GIVING like Jesus did and by educationing the people in fear not just because they are entitled or we feel bad but because the will of all humans is in a SINGLE person.

"[C]ulturally embedded Americans"? Like all good academics the author asserts that, here in the least racist country on Earth, racism is systemic and "a key structural component" of the culture. Perpetuating this hackneyed narrative is so much easier than admitting that some cultural values do, in fact, lead to better outcomes than others. Alas, making value judgments of any kind is forbidden among sociologists. The strategy of coercive repentance will have no effect on disparities.