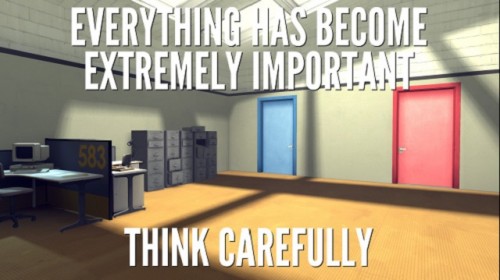 Of all the games that comment on themselves – and it seems like there are more and more of those – I won’t say that The Stanley Parable is the best, but I definitely haven’t played another that made its intentions more blatantly clear or went for what it was after so aggressively. The Stanley Parable, originally a Half Life 2 mod, has a lot to say about games. But I think it also has a lot to say about everything.

Essentially, The Stanley Parable is the story of a man named Stanley (surprise), a mundane office worker in a mundane, soul-killing job that involves sitting at a computer terminal and pressing the buttons he’s told to press. One day, Stanley looks up from his desk to find all his co-workers gone and his office deserted. Confused and more than a little concerned (the narrator tells us), Stanley takes the outrageously courageous step of getting up and sallying forth to discover what exactly is going on.

At this point the player has a choice (in a sense). They can follow the pre-conceived script, delivered to them via instructions from the narrator framed as simple narration of Stanley’s actions. If they do this, they’ll encounter a mind-control facility hidden in the bowels of the building, which they will turn off, and emerge – free at last – into an idyllic, sun-drenched countryside. On the other hand, the player can disobey the narrator’s instructions, and alternately find themselves in scenarios involving, among other things, a game involving a baby and fire, a massive explosion, the total breakdown of the game itself, and a very erratic Stanley Parable Adventure Line™.

The game is obviously complex in terms of its critique, and is working on multiple levels. It can be understood as a skewering of Office Space-style labor, but also a criticism of the way narrative works in games to constrain player agency. The story of Stanley and the narrator is the story of a clash of wills, and when Stanley/the player refuses to go along with the narrator’s directions, the narrator reacts with bemusement, shock, confusion, and anger – as well as a jaunty instructional video concerning the importance of making good choices.

the lol elo boost will help to take your burden off by giving you the help. It gives you a lot of time for doing other things in life when knowing you are still on the way to achieving your goals.

The choice argument/discussion/thing in games has been going on for quite a while – a lot of games make selling points out of the fact that they offer so many choices, or a few meaningful choices, or multiple endings, or just giant sandboxes in which to play and murder people a la the Grant Theft Auto franchise. The thing is that choice in games is complicated by the relationship between rules and fiction, something on which The Stanley Parable also comments. If the game’s object is essentially to lead a player through a pre-determined plot, then the player can’t be allowed to deviate from the plot much, if at all, for fear of ruining the story – not just in the sense of the events of the plot itself, but in the sense of narrative flow. For instance, if the plot’s sense of urgency requires you to rush from point A to point B to prevent a character from being beheaded, taking your time to explore a few hallways and scavenge around for items diminishes that sense a bit.

In other words, a fiction-focused game is going to be very constraining in terms of its rules – the logic of the gameworld won’t allow the player very much in the way of meaningful action outside of what they’re “supposed” to be doing (I realize that there are a few exceptions to this, but I’m purposefully speaking in somewhat problematic generalities here). These games can be understood as progressive, while games that focus on rules and play without much emphasis on story are emergent. The former doesn’t allow the player much agency, and the game will proceed in pretty much the same fashion each time. The latter presents the possibility of huge variance in the way each game might go – the rules are established, and then the player is free to play the game in whatever way they would like, within those established rules. Emergent games don’t require stories at all, but progressive games do require rules. As Jesper Juul says, “Though rules can function independent of fiction, fiction depends on rules”.

This isn’t just true of games, it’s true of everything. Every story of any kind that we tell about anything at all depends on rules – in the sense of assumed conventions of what’s appropriate and possible – to make itself coherent.

One of the elements of the whole choice debate in gaming is the question of whether choice/agency in games is necessarily a good thing all of the time. Some players expect and demand choices in the games they play, and judge the quality of a game according to whether or not meaningful choices are available. The Stanley Parable riffed on this in one of its promotional videos, the “Raphael” trailer:

The difference between choice in emergent versus progressive games isn’t just about the sheer amount of choice that you have but about meaning – choice in a narrative game has – if the game is done well – the emotional weight and resonance that participation in a powerful story should have. In my own personal experience, in fact, powerful narrative makes choice irrelevant. I get so caught up in the story being told that I don’t notice the way the gameplay itself is constructed, nor do I care about it if I notice.

An example of this is Enslaved: Odyssey to the West, which featured decidedly lackluster gameplay; however, I couldn’t have cared less because I was so enraptured by the story itself that the gameplay was simply a means to the next part of the story. I literally did not notice that I was really playing sort of a meh game. When I played The Last of Us, I had absolutely no say in anything that happened in the story – very little of what I did impacted anything related to the narrative at all. Again, I didn’t notice, nor did I notice that the gameplay became a bit repetitive; all that mattered to me was the story.

So the story – and the construction and flow and assumptions of narrative – were actually obscuring elements of design. These elements may or may not have mattered, depending on what type of gamer I was, but still.

We need to ask whether agency is always a plus. I’m not sure if it is, in a game like The Last of Us. But we also need to understand what we mean by agency.

An essay written a few years back by Steven Poole on games and labor questions whether the format of many contemporary games might not a problem. Poole suggests that games like The Sims and Farmville reproduce a normalized capitalist, wage-serf/data serf view of play, and therefore the world, and the ludic structure of these games forecloses on any possibility of meaningful resistance:

Be loyal, keep your head down, earn currency. Nothing could be a more perfect advert for what is sometimes called the “American way” than The Sims. Buy a Sim a large mirror and she will be happier, by virtue of being able to gaze at her reflection. Buy him a new oven, and he’ll become more popular after giving dinner parties. Help your Sim climb the slippery pole of a career as a politician or scientist. This is a game in which the brutal rules of free-market capitalism are everything. More money makes a Sim happier; social dissidents are not allowed. Do you want to drop out of the rat-race, wear charity-shop tweed suits and spend your days playing chess in the park? Sorry. Such gameplay possibilities are ruled out by the political assumptions buried deep in the game’s structure.

There’s certainly something about the activities in these games that’s somehow weirdly satisfying, even if they do replicate meaningless, repetitive jobs – why else would they be so popular? It shouldn’t escape our attention that, though games like Farmville are certainly more emergent than progressive, they still rely on at least a basic narrative foundation that makes activity within the game meaningful. In Farmville, you’re a farmer – very simple, but making explicit reference to narrative tropes of romantic simplicity and authenticity with which most of us are at least sort of familiar. In World of Warcraft, the mythos that backgrounds less story-oriented player action is Tolkienesque in its complexity and depth. In The Sims, the design of character interaction encourages players to construct their own narrative for the lives of their Sims – I know I used to create entire soap operas in my head around feeding babies and going to work and utterly failing to cook lobster.

Even in these games – again, more emergent than progressive – narrative plays a role, and an important one. On the surface it appears to simply be making games potentially more involving, more “fun”. But its secondary – and perhaps more important – function is to obscure the realities of the game’s design. You don’t really notice what it is that you’re doing.

I’ve had more than one moment where I’ve looked up from one of these games and realized that I wasn’t even really having fun anymore. And yet I had blown an entire hour on it.

So why does this matter, outside of games? Because it highlights one of the ways in which narratives and design work together toward ends that can be less than positive. The most powerful narratives that pattern our daily experience fade into the background of everything; they become so assumed that we never think to question them or wonder what it is that they’re really doing. David Banks recently made some incredibly important points about how the assumptions behind certain kinds of design come about, proceeding from an alarming location of power and privilege. The design of our objects might appear to have nothing to do with narrative, but in fact narratives about what’s good, right, and desirable provide a context for how the work of design is done. So narratives about an idealized – and attainable – middle class suburban/exurban lifestyle provide the context for a coffee machine whose light is way too bright.

If we don’t ask questions about what narrative does, about who it serves, we miss that.

I love stories. I think they’re one of the most worthwhile, important things that we do as a species. But that doesn’t mean that stories are an absolute good, or that narratives are always pathways leading to a positive end. Who tells stories matters, as well as why they’re told. Our narratives both constrain and are constrained by structures of power. If we don’t sensitize ourselves to that, there are all kinds of things we won’t see that we probably should.

Sarah is both progressive and emergent on Twitter – @dynamicsymmetry

[…] "I love stories. I think they’re one of the most worthwhile, important things that we do as a species. But that doesn’t mean that stories are an absolute good, or that narratives are always pathways leading to a positive end. Who tells stories matters, as well as why they’re told. Our narratives both constrain and are constrained by structures of power. If we don’t sensitize ourselves to that, there are all kinds of things we won’t see that we probably should.."  […]

Sometimes it doesn't serve a (who) person at all. Sometimes it only serves a (what) algorithm that nobody bothers to question whether or not its serving any person.