This is the first post in a new Cyborgology series we call #review. #review Features links to, summaries of, and discussions around academic journal articles and books. This week, I’m reviewing: 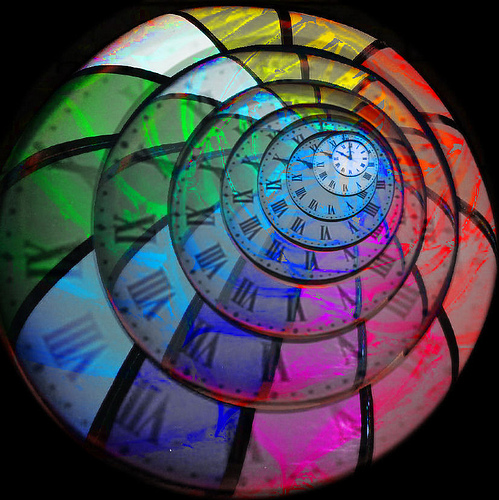 Goodings and Tucker work to understand the difficulties of embodiment in light of pervasive technological mediation, and in particular, Facebook’s Timeline. They do so using data from 8 focus groups, with a total of 25 participants.

Goodings and Tucker address the first issue—blurring of network boundaries—utilizing Serres theory of communication.  Serres contends that all nodes of communication require mediation, or a host. That host, however, necessarily creates “noise,” or that which disrupts communication. For example, telephones create static, voices stutter, and Wifi connections run slowly. Facebook is the platform of interest for Goodings and Tucker (though they imply that their work is applicable in the broader social media context). The noise produced by social media, for technologically mediated bodies, is that of blurred boundaries. Specifically, technologically mediated bodies experience noise when temporally distinct selves and socially distinct networks converge in ways that contradict one another.  The problem of the contemporary citizen is then to manage this noise, while engaging through the host (i.e. Facebook or social media platforms more generally). The authors write:

…[W]hen online bodies are fed back to us through Facebook there can be a sequence of unanticipated connections. To Facebook users…it also presents a moment where the computer mediation is revealed, a process that requires managing the coming together of bodies from different ‘space–times’. This is a distinct problem in social media, as in offline social situations it is typically accepted that our different bodies or selves are unlikely to collide (42)

…[N]oise does not simply refer to a technical term of communication engineering, but refers to an additional element that is produced through the mediated act of communicating. In the case of social media this involves the mediated technological space of connecting online… [C]ommunication in Facebook is focused on conveying certain messages from their sender perspective, for example about a night out. Yet Facebook introduces intermediary actions in terms of the visibility of the communication to those who will receive the message. The technology itself works in such a way as to create certain forms of noise (44).

I love the use of Serres, and in particular, the “noise” metaphor. However, the authors spend several hundred words delineating the existence of “context collapse,” a well-established concept which describes the blurring of network boundaries within social media, without ever citing the term, or engaging with its surrounding literature. Here is a short literature review, and etiology of context collapse as a concept. This exclusion is unfortunate, as the words spent describing context collapse could have been better spent connecting Serres’ metaphor with the existing literature. With that said, those of us interested in context collapse will likely find this article useful moving forward.

The second difficulty of technologically mediated embodiment, as identified by Goodings and Tucker, is that of an overly static and fragmented biography. They focus empirically on Timeline, and frame their discussion using the work of Henri Bergson. Specifically, they conceptualize the body using Bergson’s images. For Bergson, the social world is made up of an assemblage of images, or that which the body perceives. Images reside between things and representations. The body is a special kind of image, unique as the only image known from the inside.  Temporally, the body-as-image is a moving process, co-constructed along with other images, incorporating the whole of a past. The past, for Bergson, swells into the present and future, layering itself, atop itself. Timeline complicates this by fixing the past, selecting out documentable memories and presenting them in linear ways. The past, through Timeline, is no longer cumulative, stifling narrative movement and fluidity. The authors note that such fixing was present in earlier eras through photographs and home movies, but the contemporary era is unique in the visibility, volume, and so centrality, of these time-fixing documents. They state:

Knowing what somebody ‘did’ seems to be interactionally problematic as it mediates a fixed sense of the body, which follows along in a linear fashion and where all moments can be understood in terms of a succession of fixed points in the past. This function fails to grasp the ability for the past to be created anew in our daily attempts at reordering the past… The experience of Timeline relates to Bergson’s concept of ‘bodies as images’ which continually move, as opposed to being defined as stable spatial entities. For Bergson, the world consists of nothing other than images. Here the Facebook Timeline acts as a kind of force that spatialises past social media activity and goes against the virtual aspect of memory for Bergson, in which the past is not contained but endures, taking a temporal not spatial form. (46-47).

The authors are astute in their analysis of the affordances/constraints of Timeline. Social media are platforms through which we not only perform a self, but come to know and develop our selves. Fixing a past, especially a highly curated and selective version, alters selfing processes in significant ways. Pushing this further, and focusing perhaps on the other side of the coin, their analysis lends itself to a discussion of ephemerality. Perhaps social media tends to eschew ephemerality, upending its important role in a fluid selfing process. However, it need not. Users agentically avoid such fixing through things like whitewalling and purging. More recently, new technologies have come to the fore which embrace ephemerality. Snapchat is, of course, the quintessential example. This social media platform facilitates a body that is both technologically mediated and simultaneously ephemeral. It has a solution built in. It is part of the social media ecology through which users share the mundane, the private, the floating pieces.

I applaud the authors for their insistence upon avoiding binaries. Moreover, the work is highly useful and insightful as an analysis of Facebook Timeline in its own right. Further, the piece smartly incorporates the work of Bergson and Serres, locating these theorists, in useful ways, within discourses of new technologies. Moving forward, the context collapse literature can benefit from the integration of this piece (just as this piece could have benefited from the inclusion of context-collapse theorizing). Moreover, the piece offers a starting point for talking about fixidity, ephemerality, and the technologically mediated body.