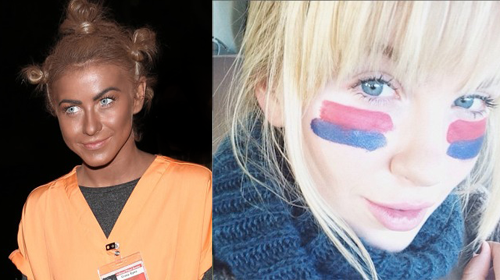 There are no more media in the literal sense of the word (I’m speaking particularly of electronic mass media) – that is, of a mediating power between one reality and another, between one state of the real and another. Neither in content, nor in form. Strictly, this is what implosion signifies. The absorption of one pole into another, the short-circuiting between poles of every differential system of meaning, the erasure of distinct terms and oppositions, including that of the medium and of the real… Circularity of all media effects. Hence the impossibility of meaning in the literal sense of a unilateral vector that goes from one pole to another. One must envisage this critical but original situation at its very limit: it is the only one left us… the medium and the real are now in a single nebula whose truth is indecipherable.

Halloween is said to be a secularized celebration of the traditional Christian holiday, All Hallows Eve (itself appropriated from pagan ceremonies to remember the dead). This, of course, is false. Symbols of death and of our connection to what lies beyond (e.g., pumpkins, jack-o-lanterns, ghosts, witches, etc.) do little more than provide a textured backdrop to masses of fantasy heroes/heroines, sexy [fill-in-the-blank], cross-dressers, and, increasingly, it seems, racial/cultural appropriators. During Halloween, we do not celebrate our traditions; we cannibalize them. And, that is what makes Halloween unique. Halloween is a celebration of the present–a reveling in the zeitgeist of our time. Halloween is the quintessence of our post-Modern cultural logic.

Post-Modernity (as Jean Baudrillard suggests in the quote that opens this piece) is, above all, defined by the implosion of boundaries between various cultures or systems of meaning. This implies, of course, that there was once a (pre-Modern) time when when systems of meaning existed separate and distinct from one another. Of course, there were occasional instances of cultural exchange that brought about (dialectical) changes in each system, but these interactions did not erode the boundaries between them. Difference remained.

As the Modern era emerged, these exchanges became less arbitrary. Modernity, with its aim of producing a single, rational, and all-encompassing system of meaning and its penchant for fitting all differences into rigid categories, sought to hierarchicalize these cultures as well as the nature and direction of transmissions across them. Cultures placed into inferior categories were repressed. So-called “progress” meant using various media to supplant certain systems of meaning with those deemed superior. Thus, for marginalized people, these externally-imposed categories often represented an existential threat to their way of life.

Post-Modernity, describes a dominant cultural reaction to Modernity–a resistance of the rigid categories it created and an affinity for blurring, blending, and exchange. Halloween has become an ecstatic indulgence in post-Modern erosion of contextualized meaning. It embodies what Baudrillard might call the free flow of signs and symbols. It is a night when everything is acknowledged and accepted as overt simulation. Costumes, as the primary medium of Halloween’s post-Modern expressivity, do not convey meaning but decontextualize and obliterate it.

The problem with Halloween–like post-Modernity writ large–is that, though it transgresses the categories constructed by Modernity, it does little to actually challenge these categories and wholly ignores the structural inequalities they sustain. (As Jacques Derrida persistently reminds us, the purpose of constructing such categories is, inevitably, to establish hierarchies.) The question of who gets to setup and tear down or ignore categories–what Pierre Bordieu called “symbolic capital”–matters. And, what Halloween demonstrates is that those with privilege not only create and benefit from the categorical boundaries that systematically oppress others, they are also free to cross these boundaries merely to entertain themselves.

In celebrating Halloween, the privileged see the world’s culture, and their histories, as a pallet to freely borrow from in pursuit of the unique and the unexpected (see: “hipster racism“). Symbols laden with meaning for the oppressed are worn for a night and then discarded as just as easily. In cases, such as the appropriation Native American clothing for costumes, symbols nearly destroyed by Modern Western culture are now trivialized and made into the exotic playthings of post-Modern culture. The post-Modern zeitgeist of Halloween never asks us to reflect on the violence done when Modernity constructed the hierachicalized categories it used to other and oppress, nor does it ask us to consider that ability to adopt and discard symbols of oppression is, itself, an expression of privilege not afforded to the oppressed. Post-Modern culture’s transgression of boundaries is no less an expression of power than Modern culture’s assertion of the right to impose them.

In asserting the power to appropriate without regard to structural inequalities and the experiences of the oppressed, Halloween illustrates that privilege often manifests as the freedom to ignore (not only imposed categorical boundaries but also the people who are affected by them). In this ignorance, Halloween becomes little more than an annual social ritual of vomiting up the worst aspects of our society–racism (as well as sexism and wasteful consumerism)–and wallowing in them.

[…] “During Halloween, we do not celebrate our traditions; we cannibalize them.” […]

sorry for going off topic from the (important) second half of this post but, theory: perhaps my only issue with Halloween, and it is a significant one, is that it is only one day. halloween is a post-modern simulation like Main St in Disney Land or the New York, New York casino in Vegas are simulations. you know where i'm going: for Baudrillard, these *weren't* good examples of post-modern simulation precisely because they disguise the fact that the *rest* of America is a simulation. fakes that dialectically reify the fiction of the real. as such, Halloween costumes, from the Baudrillian perspective, are exactly what *not* to consider when discussing contemporary simulations. agree with your point, but don't think Baudrillard, who you are using here, would at all.

Totally hear what you are saying. Baudrillard warned about "3rd order" simulations that conceal the lack of reality in everything else. I agree that, in our mundane, everyday lives, we find a separation between symbols and the "profound reality" of the systems of meaning that they once emerged in. So, yeah, in some sense, I suppose that I am disagreeing with Baudrillard by saying Halloween focuses our attention on this rather than distracting from it. I'm still mostly indebted to him in this line of thinking.

Really, this post was really just me trying put down a series of thoughts that had just occurred to me (and which did, in fact, start with Baudrillard). But that's a clarification worth making.

Just to not lose anyone in this discussion, I'll include another quote from Simulacra and Simulation:

Costumes, props, and appropriation | JAPANsociology — May 5, 2014