This post is basically speculative. It’s a question, or rather, a hypothesis. I’m not citing empirical evidence so much as suggesting a line of inquiry, which then needs some grounding in empirical evidence. The question is this: If Afrofuturism uses UFO/alien spaceship imagery to describe slavery and middle passage,* can, and if so where, do drones fit in Afrofuturist mythology?

In a Cyborgology group-email, PJ hypothesized that “that the prevalence of drones has made the UFOs unremarkable in many parts of the world.” Around the same time, Tavia Nyong’o’s questions and concerns about the contemporary politics of Afrofuturism appeared in my twitter timeline. 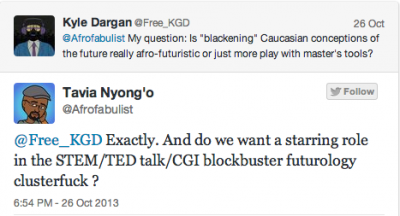 Afrofuturism is a set of theories and practices that critique and imagine alternatives to Western modernity. Specifically, Afrofuturism targets the linear, progressive temporality which posits European/Western civilization as “present reality,” as the culmination of historical development, and the “future” vis-a-vis which non-Western cultures are the supposedly primitive “past.” One way Afrofuturists do this is by scrambling linear progressive temporality. For example, musician Sun Ra treated Ancient Egypt as both distant past and alien, intergalactic future. Theorist Kodwo Eshun calls this notion of time the “futurepast.”

But, as Nyong’o’s tweets suggest, that sort of critique might not pack much punch anymore. Now that we neoliberals have reached what Francis Fukuyama famously called “the end of history,” when mainstream society seems to exist in the “futurepast” imagined by Afrofuturists (as Steven Shaviro has argued), is Afrofuturism obsolete? Has it become co-opted? (Think, for example, of the mainstream industry success of Afrofuturist musicians like Janelle Monae, Lil Wayne, Kanye West, & Beyonce.)

This is where PJ’s comment is helpful. Maybe the myth of the UFO speaks to a historically and ideologically specific racial formation (to use Omi & Winant’s term)? African slavery is absolutely essential to modernity, and the UFO myth helps unpack and resist this. What if Afrofuturism needs a new mythology, one tied not so much to UFOs and modernity, but to, say, drones and capitalist realism? How might Afrofuturism adapt itself to respond to, for example, accelerationism? Could the myth of the drone, instead of the myth of the UFO, help thematize contemporary forms of racism and anti-blackness? If neoliberalism has upgraded racial formations, how might Afrofuturist mythologies be made compatible with these upgrades?

Here’s one potential way critical drone mythology might work (again, this is just a hypothesis, so I’m happy to be pushed and challenged here). Last week, I argued that “droning” was a specifically neoliberal form of surveillance. I said “drones drone by creating a consistent psychological pitch or timbre–terror.” Consider the resonance between that idea and Kodwo Eshun’s claim that neoliberal capitalism…mobilizes speculative affect” such that “the affective register of our relation to the future has been shifted from euphoria to fear, a state of fear without forseeable end” (emphasis mine). Eshun’s concept of futurity sounds a lot like my notion of droning–they’re both attunements to constant, pervasive fear. If alien abduction captured something about modernist racial formations based in slavery, how might droning capture something about racial formations based in the war on terror?

Drone mythos might help us conceptualize and critique the role of anti-blackness in contemporary imperialism. When we Americans think of drones, we usually think of them as something that happens in Pakistan, Yemen, or other Middle Eastern locations. However, droning practices certainly exist over here–you could think of Stop & Frisk and Stand Your Ground as a method of striking a constant pitch of fear among targeted populations. How might this idea that droning only happens “over there” obscure racist droning “over here”? In other words, how does droning re-enforce anti-black racism? On the other hand, how does anti-black racism facilitate droning, especially insofar as droning seems to target non-black people of color?

Drones, as increasingly autonomous machines, also speak to one of classical Afrofuturism’s other main myths: the robot as slave/slave as robot. The English word “robot” comes from “robota,” which is Czech slang for “slave.” Afrofuturism views enslaved black people as wetware robots avant la lettre. Or, before capitalism had mechanical robots to do its slave labor, it had black people. Drones are robots; the surveillance state and neoliberal capitalism outsources their crap jobs to them. In what way are people of color the “drones,” the autonomous, “un-manned” (that is, lacking moral personhood and/or citizenship) devices that keep neoliberal capitalism chugging along? Think about it: drones are often framed as expendable. How does the expendability of drones relate to the expendability of populations of color? If neoliberal capitalism is fundamentally a “shock doctrine,” a practice of creative destruction, does the idea of the expendable drone help us understand the way specific populations are framed as good candidates for destruction? Or, if drones themselves, as expendable instruments, are used to destroy other, even more vulnerable populations, how does the myth of the drone help us understand how select groups of non-whites are used as instruments to further marginalize even more vulnerable non-white populations?**

I don’t really have answers to these questions…yet. Like I said, these are just hypotheses. However, I’d love it if you’d share your thoughts and help us all think more carefully through the speculations I put forward here.

* Some strands of Afrofuturism treat slavery as a form of alien abduction…which, you know, it is, in a way. Like those cold war alien abduction myths, African slavery involved funny-looking, weird-skinned guys touching down in huge ships, kidnapping people to experiment on them (trying out practices of dehumanization) and genetically engineer them (eg through rape, forced ‘breeding’ etc.), and so on.

** Philosopher and Salon contributor Falguni Sheth has written some excellent work on this on her blog.