Home or Frontier? On the Ambiguity of “Gravity” 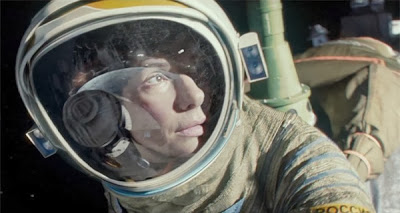 The film Gravity is having an especially strong run at the box office, and it seems to be having an especially powerful impact on those who have seen it. It’s certainly a beautiful movie, visually, and an unusual one, as far as big-budget Hollywood attractions go. For anyone who thinks a lot about technology, as I do, the film has some interesting, though somewhat ambiguous, messages.

Be forewarned: What follows is all spoiler.

Technology gone wrong plays a central role in Gravity. The film also resonates with a theme that’s central to the technological project: the drive to open new frontiers. This is not to say that either of those subjects is the principal concern of Gravity’s director and co-writer, Alfonso Cuarón. His interests lie elsewhere, as I’ll explain. Still, when you make a saga about human beings in space, questions of technology and frontiers are hard to avoid.

The direction of Gravity’s plot makes it, in a basic sense, an anti-frontier movie. It’s all about the need of Sandra Bullock’s character, Dr. Ryan Stone, to return to Earth. She has to get home. There’s no mission to explore an unknown planet, destroy a threatening asteroid, or investigate mysterious transmissions from Jupiter. The plot hinges on what is, in essence, an industrial accident during a routine repair mission a few hundred miles above Earth. 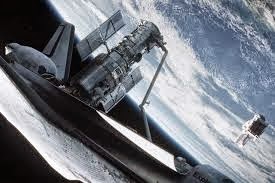 What’s not routine is our reaction as viewers to that routineness. It’s clear from the reviews and social media comments on Gravity that people have been stunned and moved by the beauty of Earth as it’s depicted from the astronaut’s perspective. Also stunning is Cuarón’s depiction of the vastness of space. The genius of  the film—the reason people find it so effecting, I think—is the way Cuarón positions his human characters between those two poles. Seldom has the strangeness of our position in the cosmos been defined so starkly. Dr. Stone’s desperation to return to Earth is more than a fight for survival. It’s a flight from existential terror.

As I say, I don’t think Cuarón has any particular ax to grind for or against technology, but it’s hard not to notice in Gravity how alien the space environment is for the humans who are moving around in it. This is something that’s always mystified me about space enthusiasts. I understand being motivated by the adventure of exploring space, but the appeal of actually living there escapes me. You can’t breathe in space! Or walk! You have to put on an incredibly bulky suit every time you go out the door. It seems like it would get old pretty fast.

As many critics have pointed out, Dr. Stone’s psychological motivation is to come home not only from outer space, but also from her disconnection from life. Having lost a daughter in a freak accident, she loses herself in work, and in long drives to nowhere after work. This suggests that Cuarón might be commenting on the technological project, after all. Is he saying that space exploration is equivalent to an escapist drive into the night?

Probably not. In fact, Gravity’s concluding scene is open to a couple of interpretations.

On the one hand, when Stone pulls herself up on the shore, gasping for air and grasping terra firma, we see an affirmation of how good it is for her to be back where she belongs. She’s isn’t running away anymore. She’s alive, and grateful to be alive: she can embrace the pain that comes with the joy of existence. She’s home, and space travel seems behind her.

Or is it? Stone’s emergence from the water is an obvious allusion to humankind pulling itself out of the ocean and onto land to begin its evolutionary adventure as a terrestrial species. In case we miss the point, Cuarón shows us a frog swimming alongside Stone as she escapes the sinking space capsule and swims toward the surface. Once on dry land, Stone doesn’t just lie there. She pulls herself to her feet and stands, and the low angle from which Cuarón shoots her rise leaves no question that he wants us to consider her standing a courageous, heroic act of will.

All this seems to suggest not so much that Stone has learned to accept the limitations of life on Earth, but that she’s found a new determination to accept no limits. It’s a testament to the indomitability of the human spirit, to the implacable drive for progress that brought us out of the depths and took us to…well, outer space!

Cuarón has said in interviews that the inspiration for Gravity was the divorce he endured immediately before writing the script (with his son from a previous marriage). The ability to triumph over adversity, to survive and move forward, are themes that mean a lot to him. They’re also themes that mean a lot when contemplating what’s good and bad about the technological project.

Progress as an ideal has taken its hits in recent years, in part because it’s been inextricably linked with a refusal to accept limitations. Nonetheless, we can’t give up on it. We have to believe we can move toward something better, and it’s not unreasonable to think that technology, sensibly applied, can help us get there. The flip side, of course, is that technology has so often been used to take us in the opposite direction.

As Gravity’s credits roll, we leave the theater inspired by Dr. Stone’s resilience and her determination to carry forward the human adventure. What we tend to forget is the reason she ended up on standing heroically on that shoreline in the first place. She was sent spinning helplessly into space when a Russian missile exploded a dead satellite, starting a chain reaction that sent a shower of metal debris hurling into orbit. This is no made-up problem. So many pieces of space junk now surround Earth—the Air Force currently tracks 20,000 of them, some as large as a Greyhound bus—that low-Earth orbits will eventually have to be abandoned if some method of cleaning up the mess isn’t found.

Doug Hill’s book, Not So Fast: Thinking Twice About Technology, has just been published on Amazon Kindle and other outlets. He blogs at The Question Concerning Technology and can be followed on Twitter at @DougHill25.

The appeal isn't of living in space as much as it's an appeal of being part of helping the species transcend dependency on just one planet.

[…] looks at the technology Gravity (from a different vantage point from that presented on Girl W/ Pen! last week), can’t peel […]

[…] Home or Frontier? On the Ambiguity of “Gravity” on Cyborgology […]