All Watched Over by Machines of Loving Grace

Just let it in. Let it watch you at night. Tell it everything it wants to know. These are the things it wants, and you’ll let it have those things to keep it around. Hovering over your bed, all sleek chrome and black angles that defer the gaze of radar. It’s a cultural amalgamation of one hundred years of surveillance. There’s safety in its vagueness. It resists definition. This is a huge part of its power. This is a huge part of its appeal. – “I Tell Thee All, I Can No More”

This past weekend I was in New York for the Drones and Aerial Robotics Conference (the aptly acronymed DARC) with The State’s Olivia Rosane and Adam Rothstein. In our panel we were expanding on our ongoing discussion about drones and culture, particularly what we can understand as “drone culture” and “drone fiction” and what the greater implications of these things are for how we understand ourselves as technological beings.

One of the most fascinating arguments that occurred at DARC was over the word “drone” itself. Some felt that “Unmanned Aerial Vehicle” worked better. Some were highly ambivalent about the connotations of the word “drone” and sought – as hackers and civilian hobbyists – to distance themselves from its negative military war-and-surveillance connotations. Apparently the military itself is trying to distance itself from the word, for the same reason. Are drones cool? Are they awful? Are these things mutually exclusive?

What is a drone?

This is an important question, and it turns out to not have an easy answer. The Mars rover Curiosity has been called “the world’s most popular drone”. Curiosity doesn’t fly – is it still a drone? Is flight necessary? What about Curiosity smacks of droneness? What doesn’t? How do we know a drone when we see one?

That’s the word, I think. See.

Flight is an element, and while it isn’t a practically necessary one, it is attached in some fundamental way to the process and the state of watching. A gaze from above is everywhere and nowhere at once, removed from us by virtue of its occupation of dimensions that most of us usually don’t spend a whole lot of time in. It’s distant but also profoundly intimate – a gaze that is everywhere and nowhere could be miles above or working its way under the skin, into the body itself.

It also attracts, pulls in and traps. I think we can speak here not just about a gaze but a Gaze in the most aggressive sense, and with a Gaze come issues of consent. What does it mean to be watched? Does it matter whether I’m watched by something with a human pilot on the other end, or by something at least seemingly autonomous? Being watched is subtly – and not so subtly – reminiscent of dominance and submission; I submit to the gaze of another, and even if I resist, that resistance is part of the dynamic. If my resistance is genuine, it slides into something much darker and more horrifying, but rape is lodged firmly in our cultural understanding of sexual politics. It’s lodged firmly in our understandings of ourselves. When drones perform this, backed up by the massive apparatus of the surveillance state, they approach closer to the human end of the human-machine spectrum. As Adam Rothstein writes:

We are in love with drones, just as we are captivated by each others’ bodies. From our species’ physiology is born a cultural reliance upon seeing, as a stand-in for doing. And from our technological abilities to collect information, grows the prime mover of our strategizing. Anything we look at, can be looked at in a sexual way. A pair of binoculars, a map, a photograph, a satellite, or a UAV can aid any sort of politics if deployed correctly, and there is nothing inimical to a particular regime in these technologies. Staring out of our windows at our neighbors, whether for titillation or for neighborhood watch, is merely an activity that is part of our current cultural humanity.

Even when one accepts surveillance, that’s an act of sado-masochistic trust as much as fear. Submission of that kind can’t ever really be about anything else.

We’re beginning to understand that surveillance is active but also strangely passive in many cases – the scraping of massive amounts of information into Big Databases where it may or may not ever be personalized and in fact may or may not ever be used. But we still tend to imagine it as active entirely, and individual profoundly. I’m watched by a single machine, a single person, and even in aggregate I’m still watched by a singular godlike entity, a collection of many eyes into one set. A drone is a component of the surveillance state, but we understand drones as separate somehow, divorced from human agency, divorced – in a fundamental way – from politics, though every act of a drone is profoundly political, visited on a political flesh-and-blood body.

So is being watched the same as being known? If a Gaze possesses and devours, is it mindless? In a transaction so intimate – consensual or not – does a Gaze understand? 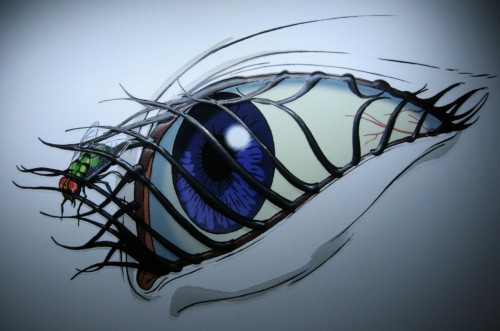 Sex is an act of possessing the body; it’s also an act of understanding the body, but that understanding is necessarily framed by the one doing the understanding, and the one being understood may or may not have the power to shape that in any way. Most of us want to be known; some of us are desperate to be known, and sometimes that desperation transcends any particular care for who or what knows. I think of putting myself on display for a drone in an act of erotic surveillant exhibitionism, and there’s something safe about the thought, something almost comfortable. A drone doesn’t judge. A drone wants only to watch.

Sometimes a drone wants to kill, but the watching must always proceed that. There is no drone violence without a drone Gaze.

If the source of drone violence is its Gaze, we need to understand that Gaze as existing within the context of all the other implications of the Gaze. Watching in that way enables sexual violence, of the flesh and the heart both together; the surveillance state is an element of rape culture in that – among other things – certain people are more vulnerable to being watched and to being violated. Drone culture is about the production and reproduction of social power, domination, and oppression. It can’t be understood apart from these things, no matter how benign it appears, no matter how separate from the state it looks. But drone culture is also about doing critical battle with these things, about resistance to them.

But at the end of the day I understand a drone as something very simple, a thing that is also a process, something watching me in an all-encompassing sense, distant and cool and ultimately inscrutable, bearing no malice and no particular affection. I’m not declaring something like that neutral, because nothing is ever neutral. I’m saying that if we want to know what a drone is, the answer is going to take us beyond technical specifications and into some very uncomfortable territory.

Which most worthwhile questions do.

A drone is an amoral piece of spying machinery which operates under a degree of autonomy.

What is spying?
What is autonomy?
What is morality?

Is there a 'drone ontology,' a program that has concern that is exterior to agency?

A drone is indifferent, perhaps. And its indifference means it easily becomes a mirror. Just like Jeremy Irons in certain movies.

[…] * All Watched Over by Machines of Loving Grace. Give Skynet a Chance. Forever War Turns Its Hungry Gaze to Africa. […]

[…] All Watched Over by Machines of Loving Grace […]

[…] At the DARC event that I wrote about last week, an attendee at our panel introduced the idea of conceiving of drones as moving along a spectrum rather than between two binary states of human/machine. However, while this is in itself a powerful idea, they made a further point: that a drone – indeed, that anything – can move in both directions on the spectrum, rather than always toward humanity. Which is what we find most often in these technological folktales; even if the boundary-blurring is progressive in nature, our construction of humanity is always the ultimately desirable state. A human should not desire to be more like a machine. […]

Toward a Drone Sexuality – Part 1: Knowledge and consent » Cyborgology — December 12, 2013

[…] I’ve written about this before, the erotic aspects of the Gaze, the ways in which the predatory nature of being seen drifts into the territory of possessive sexuality. There’s an intimacy in being known, and – again, to reference Foucault on a basic level – we often assume that anyone who fucks us gets to know something about us, at least when the fucking is coupled with emotional intimacy and connection. Someone really knowing us is sort of supposed to make us want to have sex with them. When someone has sex with us, they know us. This is naturally a massive oversimplification, but these are powerful ideas that underpin not only how we tend to conceive of sexuality but what kinds of sexuality we tend to identify as desirable and appropriate. […]

[…] “All Watched Over by Machines of Loving Grace“, Sarah Wanenchak waxes philosophical about what exactly constitutes a “drone,” […]