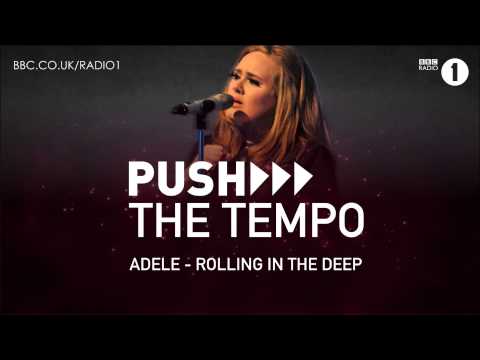 ___Danny Howard, a DJ on BBC Radio 1, has a weekly feature called “Push The Tempo.” Here, he takes several remixes of the same song and puts them in order of increasing tempo (BPM). It sounds like you’re listening to one song or mix that gradually speeds up. Or rather, the song “develops” (in the traditional musicological sense of elaborating a basic theme and becoming more complex) by progressing toward a temporal telos (ancient Greek for goal/end)–instead of dialectically achieving “Absolute Spirit,” these mixes sound like they’re ratcheting up to something like absolute speed. In this way, the mix’s aesthetic is a bit too literally “accelerationist” (the actual speeding up of the songs performs, aesthetically, the moves that accelerationist ideology idealizes, politically). Effectively, the mix is also a tour of various subgenres of EDM, house, & techno. Insofar as each of these subgenres has a rather narrowly-drawn range of standard tempi, the only way to dramatically increase the tempo of the overall mix is to begin with a relatively slower genre (sometimes even sub-120 BPM)  and work up to something jungle-y or gabber-y that conventionally approaches 200+ BPM. 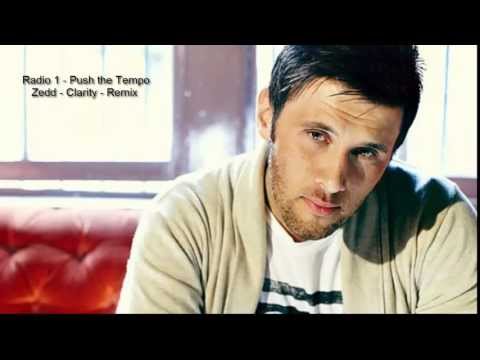 These mixes are really fascinating on a lot of levels, but what I want to focus on here is what they tell us about how people listen to these mixes, or what people listen for in listening to them. It’s pretty obvious that the primary aesthetic feature in these mixes is tempo, speed, or pace. And it’s not just tempo per se, but increasingly accelerating tempo. That’s what people are listening for. And we listen for tempo because that’s what the mixes’ formal structure foregrounds. Traditionally, pop songs use a dualist harmonic logic (consonance/dissonance) to build and resolve tension. These mixes, however, are monological–tempo is a continuum, not a fast/slow binary–and they can’t use traditional same/other dynamics to elaborate or develop the song’s main theme. So, instead, they develop the song by putting it through its paces. Each mix traces a measured trajectory through the whole range of the continuum (i.e., the set of mixes available for Howard to string together).

People used to be tuned in to conflict and dissonance–from the late 17th c through the 20th, harmonic dissonance was the main source of musical development and pleasure in both European art music and blues-based pop musics like jazz and rock. But now people are attuned to tempo. And by “people” I mean the general mainstream aesthetic norms in Anglo-American pop/dance music. DJs have long used the “push the tempo” strategy, but now it’s become part of the mainstream musical consciousness, a hegemonic “attunement” or, to use Sara Ahmed’s term, “orientation.” “Push The Tempo” is, after all, a BBC Radio 1 weekly segment, and that’s what makes it so interesting. If it’s featured that prominently and regularly on British national radio, then this attunement to speed, pace, and tempo must be an important aspect dominant aesthetic and epistemic norms. What does this attunement say about, well, how we’re tuned? About what sorts of values and epistemologies orient us to the world?

Contemporary capitalism requires knowledge-workers (and, if we use the internet, we’re knowledge/information workers, even if we aren’t paid) to monitor, assess, and optimize their rate of production. Tempo and pacing is everything.

As Adorno & Horkheimer noted in their famous “Culture Industry” chapter of Dialectic of Enlightenment, the logic of work comes to dominate the organization and experience of leisure. Leisure itself becomes productive, the site of surplus-value extraction.

Amusement under late capitalism is the prolongation of work…mechanization has such power over a man’s leisure and happiness, and so profoundly determines the manufacture of amusement goods, that his experiences are inevitably afterimages of the work process itself. The ostensible content is merely a faded foreground; what sinks in is the automatic succession of standardized operations (DE 137).

Neoliberalism has upgrade the mechanized production of commodities and commodified labor(ers) that Adorno and Horkheimer analyzed in their text. Nowadays, we don’t produce commodities, but capital itself, usually in the form of our own human or social capital. So, to paraphrase Adorno & Horkheimer, self-capitalization has such a power over one’s leisure and happiness, and so profoundly determines the production of amusement goods, that one’s experiences are inevitably afterimages of the self-capitalization process itself…what sinks in is the logic of investment. This logic of investment is what ties the means of economic production (e.g., finance) to the means of aesthetic production and social reproduction. In other words, we’re tuned into musical tempo because amusement–here, Saturday night dance radio–is the prolongation of “work.” Capitalism trains, rewards, and requires us to pay careful attention to the rate at which we prosume.

Tempo and pacing are central to the logic of investment. This idea of tempo is a new, upgraded concept of time, different from traditional notions of labor-time. In commodity capitalism, time is what makes labor exchangeable. Labor-time parses out work in hourly units and assigns each unit of work a specific exchange value (qualitatively indexed to the minimum wage). Labor can’t be commodified without mediation by time. To be compared to money and assigned an exchange value, labor must be parsed into quantifiable chunks. That’s what time does. Commodity capital uses time to mediate labor, out of which it in turn extracts surplus value. Investment capital, however, extracts surplus value out of time. Labor collapses into time, just as production collapses into consumption. The point of leisure/work is to make time more intensely productive. If you can’t make time move faster, you can make it a better return on your investment–getting, for example, more beats out of every passing minute.

This is what economist and cultural theorist Jacques Attali argued in his 1977 book Noise: The Political Economy of Music. He argues that records (i.e., musical recordings, which, at that time, were generally vinyl or tape) are not commodities but stockpiles of use-time. Commodities are vehicles for “exchange-time,” that is, labor-time expressed in monetary terms.* Records, however, aren’t primarily valued as commodities. When we buy a record, we “buy recordings of other people’s time” (101)–not the labor-time it took to transform some chemicals into a vinyl record with a song scratched into it, or even the labor-time it took to record the song scratched into the vinyl. We are buying time itself–”eventually,” we tell ourselves, “I will have time to listen to this record” (or, perhaps more familiar to academics, “eventually I will have time to read this book or article that for now will continue to sit on my shelf like it has for the last six months”).  Recordings are vehicles for “use-time”–the time it takes to “listen” to the record, to “use other people’s time” (101). Records are stockpiles of time; record collections are massive stockpiles of other people’s time. As Attali explains,

When we buy a record, we are buying the time we hope to invest in ourselves by listening to/using the record. Time isn’t a measure of value, it is value as such. In other words, time isn’t money, it’s human capital. We’re using money to buy more time, which we then invest in ourselves: what better expression of one’s social capital than the hipness of one’s record collection/iTunes library? Use-time expresses the intensity of labor invested, or potentially invest-able, in an object, service, or practice. We intensify our stockpile of time by buying more of it, in the form of, for example, musical recordings.**

Human capital isn’t a commodity, it’s an investment. That is, you extract surplus value from it in the same way you extract value from a stock or a mutual fund or whatever other financial instrument bankers use to make money from money. Instead of exchanging time for money (whereupon someone else extracts even more money from that time by exchanging our alienated labor for even more money), we invest more time in ourselves (e.g., through education) so that our time itself becomes more intensely, powerfully productive. Surplus value is generated from investment rather than exchange. To do this, we have to optimize the pace at which we use things, to get a “flow” going. (Rob Horning has been talking to the people behind Slots Baby Casino about this in his recent tumblr posts on gambling as a structure of subjectivity/capital production.) To maximize their value-output, prosumption processes need to be both efficient and sustainable. We have to watch out so that we don’t produce a disabling amount of waste (inefficiency), or overdrive the production process itself. We have to hit the right balance between production and consumption. Or, as Attali puts it, “Crisis is no longer a breakdown, a rupture, as in representation, but a decrease in the efficiency of the production of demand, an excess of repetition. Metaphorically, it is like cancer” (Noise 127; emphasis mine). The problem with cancer isn’t growth, but the rate of growth–it doesn’t know when to stop or slow down.

This habit isn’t limited to our listening practices. “How much time will I have to put into this?” is an increasingly explicit criterion we use to choose among leisure activities. For example, as Nathan Jurgenson and Nick Seaver were discussing the other day on Twitter, the popular blog/content site Medium includes approximate read-times in the headers to its articles. What matters about the article isn’t so much what it says, or the perspective from which it was written (which is what the header or byline usually indicates), but how big of an investment it is on your part. We don’t want to know what it’s about as much as we want to know how much use-time we’ll have to put into it. To decide whether it’s a good investment, you need to know how long it will take you to read–are you getting a good return on your use-time investment?

“Push The Tempo” and Medium are two examples of how the logic of investment manifests as an attunement to tempo or pace. If you can think of others, I’d love to hear about them.

* Money is what made irreducibly different things comparable–they could all be reduced, in their various ways, to exchange-value. But, as Attali argues, the means of production have advanced so far that we can actually make things identical and compatible: “repetition goes much further, when reproduction becomes possible for an object and no longer only for the standard [ie money]” (Noise 101). We don’t need money to serve as a common standard because everything is always-already standardized. For example, everything on the internet is, at some point, reducible to binary code.

** One significant advantage of Attali’s account is that it helps us explain the “value” of musical recordings now that, in 2013, a whole lot of musical consumption bypasses commodification entirely (unpurchased downloads, freemium streaming services, YouTube, etc.). Attali’s treatment of recordings as stockpiles of use-time is one way to theorize the economic and social function of records as something other or more than fetishized commodities.

You can fire off appropriately-paced comments to Robin on twitter: @doctaj.