Testimonials of a fragment of code 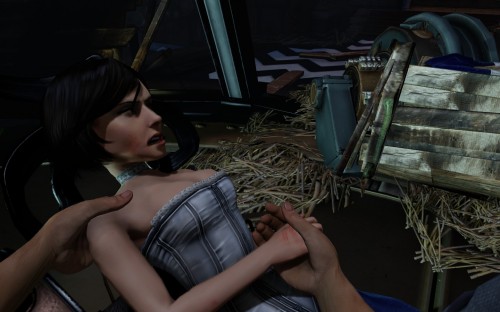 My proportions are perfect. Perfect is a slippery term; rest assured that there have been teams and focus groups and more focus groups and round after round of men with impressive cars making comments and more teams and redrafts and here we are and here I am, exactly as we have determined you want me.

If I’m not perfect, you can mod me.

You always say I when you do something. Never he. I killed a bunch of zombies. I got a wicked combo. I jumped a goddamn ice cream truck over a plane. I punched a dragon to death. I was so close to the next checkpoint and then I got sniped in the fucking head. It’s always you.

They’ve gotten a lot of things wrong over the years. Being – sometimes quite literally – a feature of the landscape, I’ve seen it all. Most of us remember Columbine but that was an old story even then. But there’s something else there. It is, indeed, you. You do these things, you make choices, you control – to the extent that the design will let you – and you kill and destroy and possess. You are the subject in this sentence. Not he. Not they. Certainly not her.

So don’t worry. Breasts will always be a thing you get to look at, never a thing you have to have.

When you get called on this, feel free to point to the exceptions, and feel additionally free to disregard what they always say about exceptions and rules.

Allow me to do these things. Please. I’m begging you.

I don’t have to look like, do, or be anything else. The only one here is the archetypal you – like me, expansive and vague and perfect.

There are a number of reasons for the persistence of this situation. I have a lot of time to think about it, what with rarely being the center of things in any active sense. Some of it is who is making me, who is bullied and chased and frightened out of doing so. Some of it is assumptions about the market that bear little to no resemblance to reality. But some of it is that subject of the sentence. Those hands in front of the screen. The silence. The truth of what you say coupled with a heavily policed line between what is and is not real.

Real is sort of at the root of all of this.

Yes, we’ll totally stop bitching and change everything all by ourselves. I’ll just pull on my nipple armor and pass that right along.

Yes, you’re totally objectified in games too, what with being muscular and strong and confident and competent and possessing of agency in addition to being overtly sexually attractive. Yes, you’re totally also being treated unfairly, what with being slaughtered in massive numbers. My barely chain mail-covered heart bleeds for you. We are full partners in this struggle, provided the struggle amounts to sit-down-and-be-quiet-and-just-don’t-get-involved-if-it-bugs-you-so-much.

Look, here’s the thing. You see me, but you don’t really see me. You look at me; there is an important difference to be drawn between that and seeing. And none of this is real but it’s all painfully real, for you, so you get to go on looking and desperately protecting your feelings while insisting that it’s no big deal.

And you don’t see. You don’t have to. The girls in the tower, the girls on the battlefield, the girls murdered and damaged to make you feel things, always girls, unless a villain is required and you need to be suitably frightened by power. The girls with the controllers in their hands being told they’re about to be raped. The “girl gamers”, because obviously girl is the most important part of that arrangement of identity.

Half of the population. You don’t have to see us at all.

There is no “let’s” in this equation.