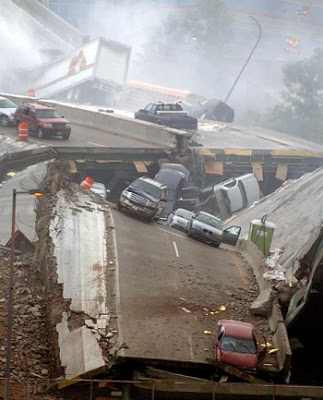 I remember hearing somewhere that one of the most important things you can teach a child is to delay gratification.

Give a five-year-old a choice between a cookie on the table in front of him right now and two cookies 15 minutes from now, and chances are he’ll take the one cookie right now. Maturity is about learning to live within your means. You want something nice, you save up for it. You resist blowing your entire paycheck on bling so that when the first of the month comes you have enough money to cover the rent.

It’s obvious that the consumer economy wants us to ignore these basic principles. Commercials tell us we can have what we want right now! The financial meltdown was largely a product of the banks handing out mortgages to people for houses they couldn’t begin to afford.

More and more we’re learning that our National State of Technology is another manifestation of the same mentality. We built it, but we don’t want to pay what it costs to maintain it.

Case in point: the 2013 report card on the state of the nation’s infrastructure from the American Society of Civil Engineers. Here are a few highlights:

· Roads get a grade of D. Federal, state, and local capital investments on roads and highways have increased to $91 billion annually. That amount is still insufficient, the ASCE says, to prevent continuing declines over the long term. The Federal Highway Administration estimates that capital investments of $170 billion annually would be needed to significantly improve road (and therefore traffic) conditions.

· Bridges get a grade of C+ One in nine of the nation’s bridges is rated “structurally deficient,” the ASCE says. The Federal Highway Administration estimates that we need to invest $20.5 billion annually on bridge repair and maintenance. We’re currently spending $12.8 billion annually.

· Dams get a grade of D. More than 4,000 dams in the United States are currently rated “deficient.” The Association of State Dam Safety Officials estimates we need to invest $21 billion to repair them.

· Levees get a grade of D-. The nation’s estimated 100,000 miles of levees, originally built to protect farmland, are increasingly protecting developed communities. The National Committee on Levee Safety estimates we need to spend roughly $100 billion to repair our levee systems.

· Wastewater systems get a grade of D. We need to spend an estimated $298 billion over the next 20 years to bring our waste and storm water systems up to snuff, the ASCE says. 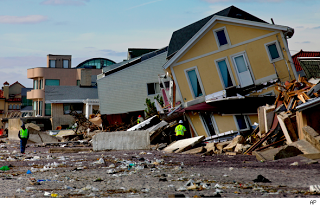 The ASCE studiously avoids mention of climate change, so it’s hard to know if the figures it cites take into account the added stress of severe weather patterns associated with global warming. Hurricanes Katrina and Sandy and the current series of floods, droughts, tornadoes, and wildfires in the Midwest and West have given us previews of what’s in store. New York Mayor Michael Bloomberg recently announced a $20 billion plan (the total cost is expected to be much higher than that) to build an extensive network of flood walls, levees, and bulkheads to protect the city from rises in sea level and storm surges. “This is urgent work, and it must begin now,” Bloomberg said.

Similarly, the ASCE report gives roadways a higher grade this year than four years ago only because in the interim there have been “targeted efforts” to improve their condition, targeted efforts that are largely the result of huge federal expenditures in economic stimulus funds to bolster a tanking economy. At the same time mass transit continues to go begging. The ASCE notes that funding of mass transit improvements has declined even as demand for mass transit has increased. Forty five percent of American households lack any access to mass transit, the report says, and where there is access it’s often inadequate. Meanwhile many systems are reducing services and increasing fares. 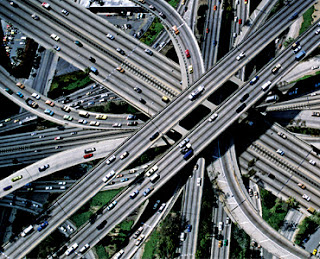 In an era when politicians and voters are obsessed with cutting government spending, don’t expect to hear many mayors—or governors, senators, or representatives—calling for major infrastructure initiatives of the sort New York’s Bloomberg has proposed. (It’s been pointed out that Bloomberg won’t be in office when the bills to pay for his plans come due.) What we can expect is that rising interest rates will make infrastructure investments today significantly more costly than they have been. And don’t forget: whatever money goes to repairing infrastructure is money not spent on other public services, including, for example, schools, public parks, and aid to the poor.

In his seminal 1977 book Autonomous Technology, Langdon Winner talked about the “technological imperative,” referring to the vast web of supporting systems needed to sustain our technological commitments. As Winner put it, those commitments set in motion “a chain of reciprocal dependence” that requires “not only the means but also the entire set of means to the means.”

The automobile culture is the most obvious example. Our commitment to cars has obligated us to build and maintain massively complex fuel and repair systems to keep them running, massively complex traffic systems to keep them from running into each other, massively complex police and ambulance systems to take care of the mess they make when they do run into each other, etcetera, etcetera. All that in addition to the hundreds of billions of dollars we’ve already spent on roads, bridges, and tunnels, and the hundreds of billions of dollars more we’ll spend in perpetuity to keep those roads, bridges, and tunnels in working condition.

The bottom line: When times were good we constructed a culture based on some hugely profligate toys. While doing so we didn’t give a lot of thought to what it would take to keep the whole thing running in the long term. In other words, we grabbed the cookie that was on the table in front of us.

Is modern culture being overwhelmed by an epidemic of childishness? José Ortega y Gasset, writing in 1930, thought so. Annals of Childish Behavior™ chronicles contemporary examples of that epidemic. The childish citizen, Ortega said, puts “no limit on caprice” and behaves as if “everything is permitted to him and that he has no obligations.”