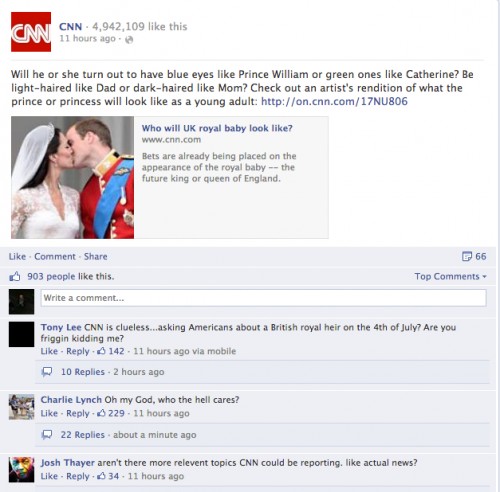 I “Like” CNN on Facebook. Not because I enjoy getting the news on my Facebook feed (my friends do that) but because I love watching a bunch of people hate on CNN. As the above photo demonstrates, CNN tends to show its ass a lot. Asking your readers about the Royal Family’s baby on the 4th of July, will undoubtedly piss off a dozen different demographics. It is constantly being called out for doing all of the things we know are wrong with American cable news. There are dozens, in some cases even hundreds, of comments about calling a revolution a coup, ignoring the important parts of stories, and generally missing the mark when it comes to stewarding and curating these weird things we generally call “national conversations.” I just want to know why CNN chooses to subject their brand to such public, naked criticism on a daily basis. 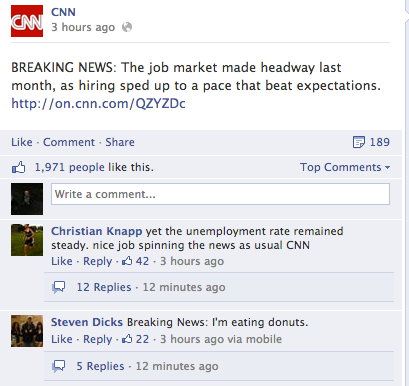 The quick answer has to do with controlling the meta conversation about conversations. If you can gather up all the people who are talking about your coverage in one place that you control, you’re generally in a better position to steer that debate. Giving people a venue to vent offers great market research while simultaneously showing that you can take criticism like a Grownup Journalist. You might even hire some interns to argue with critical viewers in the comments.[1]

There’s also a chance that CNN doesn’t have much of a choice in the matter. Facebook has done an excellent job of convincing everyone that having an “Internet presence” means having a Facebook page. Bruno Latour might say that Facebook has become an “obligatory point of passage” for being on the Internet. Wouldn’t it be weird of CNN had a Twitter account, a Pinterest, and a Tumblr but no Facebook presence? They would come off as outdated or clueless, especially if their competition had Facebook pages. 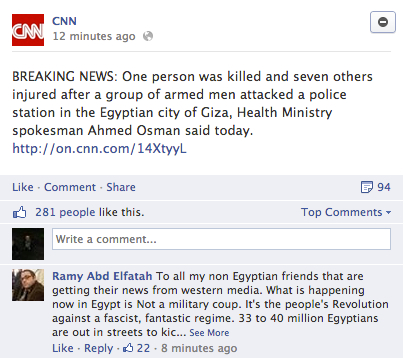 Facebook might have a monopoly on what it means to have an Internet presence, but as it stands right now, viewers seem to gain more than they loose from this scenario. The affordances of the platform let us see each other reacting to CNN’s reporting and, on the whole, the reactions are not happy ones. It is good to see each other being angry and frustrated about cable news. After all, mainstream media doesn’t necessarily try to convince you of a particular mainstream ideology, so much as it encourages you to think everyone else already believes in and shares that ideology. A Facebook page full of angry and disaffected commenters makes it hard to keep up the farce. At the same time however, the millions of “Likes” seem to add popular credibility to CNN’s brand. We wouldn’t be engaging with the page at all if we didn’t think it was important, or that millions of people are still uncritically accepting of their coverage.

Facebook pages make consuming CNN a public act, and it is that publicness that erodes the false political center they are constantly building. Not every topic has a middle road that every Reasonable Person can agree on, nor does any particular journalist have a totally objective View from Nowhere that is free of bias. Rather we have subject positions, prejudices, ideologies, private and public interests that color our view on stories that we read and write. When we talk to each other (watching talking heads do it doesn’t count) we can get outside of our own heads and see things differently. Or, perhaps more importantly and immediately, we can see how much we have in common when it comes to our dissatisfaction with the state of news reporting.

[1] To my knowledge, CNN has never done this but would you be surprised if they did?

The same applies to corporate Facebook pages. For example, a discount shoe store in the UK (ShoeZone), was recently the 'target' of a number of posts regarding their participation in work programmes (these are initiatives, drawing on US workfare schemes, that involve some form of compulsion to engage in unpaid work in exchange for benefit entitlements). At the same time, their Twitter feed and Wikipedia page was inundated with similar messages.

As with CNN, Shoezone can't really choose to not have a Facebook and wikipedia page, or a presence on Twitter. And, as you say, this looks like a win for "us".

It's worth noting though that in that case Shoezone employed a number of strategies to try and reduce the potential 'damage' - not engaging in the debate on their page, for example, and releasing a hasty statement inviting posters to email them (i.e. in private).

It seems to me that little attention is given to the 'agonistic' potential of all this.