What the Media is Getting Wrong about Steubenville, Social Media, and Rape Culture

The disturbing events in Steubenville, Ohio have spurred some insightful reporting and analysis (collected by Lisa Wade at Sociological Images) that, one would hope, raise awareness about rape culture.  As a social scientist that studies social media, I am particularly interested in how privacy and connectivity have been framed within the context of the case. I cannot help but notice the sloppiness with which many reporters write about the “dangerous mix of alcohol, sex and social media that many teens navigate nowadays.”  Studying the role of social media in everyday life may appear as trivial or superficial: something fun or novel to study. But Steubenville shows us exactly why writers and scholars need to understand social media better.

First I want to acknowledge the wider discursive field of rape culture that Steubenville sits in and is a part of.  Many of the comments have been unthinking and callous examples of the pervasiveness of victim blaming and “slut” shaming in the United States. Rape culture is like some kind of subterranean fungus: It becomes visible in small blooms of sad and disturbing victim blaming, but the majority of the organism lies unseen underground and in the dark. Vast networks of misogyny and power fantasies connect seemingly unrelated utterances of “Those athletes had such a bright future!” And “Well that’s what you get for getting so drunk.” Rape culture goes far beyond the act of non-consensual sex. Men and women alike participate in this culture for a variety of reasons that are not immediately and presently about any particular action. As Amanda Marcotte writes: 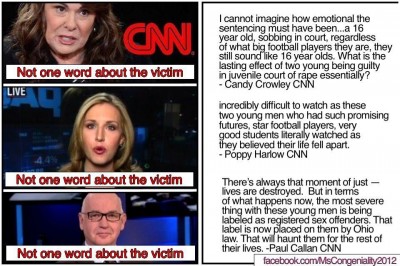 The whole case is shot through with evidence of our augmented society. Pictures were posted to Instagram, videos were uploaded to YouTube, and the victim reportedly pieced together the night through Twitter, Facebook and text messaging. Anonymous drew national attention to the case and still remains a big part of the news story. When the story turns to the role of social media and the Internet in general, news outlets go from shallow analysis to deeply vexing misattributions of blame and power. The media defaults to what Nathan Fisk (@nwfisk) has called “the frame of ‘inescapable’ technologies.” On top of the victim blaming (but also independent of it) is a basic assumption that youth online are incapable of controlling their exposure, the boundaries of their privacy, or the subsequent social action that takes place offline. While Stuebenville goes far beyond “bullying” Nathan’s insights are still germane:

In the Internet safety arena, digital dualist frames do not simply draw distinctions between online and offline social life – they are used to blame existing social problems on the social technologies that make them visible in new ways. Bullying, predation and exposure to “inappropriate content” have been seen as problems long before the widespread adoption of the Internet and information technologies by kids, and yet all of these problems appear as “new” or, at best, made worse by information technologies.

This is really one of the biggest dangers of digital dualism and misunderstanding digitally mediated social action: national conversations about rape culture, or bullying, or just about anything are hobbled if not totally halted by inane or misguided attempts at understanding this seemingly new cyber-whatever. It’s the same old rape culture it ever was, and yet the conversation begins anew. At best, we see some careful reporting about social media being a “double-edged sword” but there is never an acknowledgment that very similar underlying social dynamics have been around for a long time. At its worst, digital dualism makes us lose sight of a problem because it appears to us as something new and unknown. Blaming the mini skirt turns into blaming some amorphous “culture of over-sharing.” Blame is shifted away from the responsible parties and is distributed across various human and nonhuman actors to the point that the perpetrator loses agency and thus guilt.

I do not think 'rape culture' exists except as a feminist trope. I explain why here:

That is not to say I do not think rape exists. Or is serious. But the term 'culture' is a big word, and 'rape culture' suggests the whole of our culture is geared towards enabling and accepting rape. I find this ludicrous. There are many violent crimes just as hurtful/dangerous as rape.

'Digital dualist' positions are also used by feminists to make out 'misogyny' is more of a cultural norm than it is as well. They blame 'online misogyny' and 'anonymous commenters' etc rather than the real perpetrators of this inaccuracy - feminists themselves.

So I guess it depends on one's point of view to what extent 'digital dualism' contributes to and reinforces what 'cultures'.

[...] As a social scientist that studies social media, I am particularly interested in how privacy and connectivity have been framed within the context of the case. I cannot help but notice the sloppiness with which many reporters write about the …More By davidbanks [...]

to illustrate my point this Salon piece on 'online misogyny':

'At its best, social media illuminates aggression and injustice – Steubenville surely would have played out very differently were it not for the loathsome virtual trail the participants left in their wake. But the mob mentality of “punish the bitch,” a pattern that shows up again and again and again with sickening predictability, is real and it’s got to change. This week, the bullies, feeling offended about rape and sexism, went on the attack. And the bullies won.'

Digital dualist positions can be used in a variety of ways. Not just by the 'bad guys'.

QRG, one of the notions involved in rape culture is that most of the community is (knowingly or unknowingly) participating in perpetuating it in some way. That can include feminists, rape victims, bystanders and other labels for people beyond such obvious ones as rapists, rape apologists, sexist or misogynist persons, groups or media outlets.

Also, rape culture is not exclusionary. We can live in a rape culture while also living in a gun culture, an American culture, a popular culture, a Western culture, a DIY culture, a material culture, a patriarchical culture, a culture of violence...and on and on. These differing, often mutually inclusive cultures have variances in size, scope, association, overlap and more. The crimes that occur (be them perceived as more or less serious to a person) may be owing to one or more of the social ideologies associated with the cultures.

I take strong objection to the idea that rape culture does not exist, but I also personally do not think it's appropriate to hash out that discussion here. I feel that the extent to which the topic relates to competing theories about reality and space is relevant though.

Which is to say, again, that the differing ideas (in this case, ones about the nature of online spaces vs. offline, as they relate to behavior) are picked up and perpetuated by all sorts of people as well. Where you see two framing problems — in feminist theories and dualist theories — I only see one. I also think it's partly because these dualist positions can be used in a variety of ways makes it pervasive and problematic (aside from but related to the flaws I see in the theory itself).

The last lines of this current piece really speak it best to me, and bear repeating:

"At its worst, digital dualism makes us lose sight of a problem because it appears to us as something new and unknown. Blaming the mini skirt turns into blaming some amorphous ”culture of over-sharing.” Blame is shifted away from the responsible parties and is distributed across various human and nonhuman actors to the point that the perpetrator loses agency and thus guilt."

I can't agree enough, especially with its caution for the consequences of misplaced blame.

thanks both for responding.

if 'rape culture' is part of other 'cultures' then why don't we name those cultures.

as I say in my post I link to above, why dont we say we live in 'domestic violence culture' or 'assault of young men culture' or other cultures relating to other violent crimes.

what is it about rape that gives it symbolic precedence?

[...] At its worst, digital dualism makes us lose sight of a problem because it appears to us as something new and unknown. thesocietypages.org/cyborgology/20… [...]

p.s. re: gun culture, drugs culture etc. These concepts ARE challenged and there is decent critique which argues the terms serve to demonise certain groups/individuals and do not help reduce the problems they describe. I think the same about 'rape culture'

[...] for and implication in various forms of sexual assault; there’s David’s post the Steubenville rape case, Whitney’s post on sexts and online bullying, and PJ’s post on rape culture and [...]