Categorical Configurations and The Dualism Debates 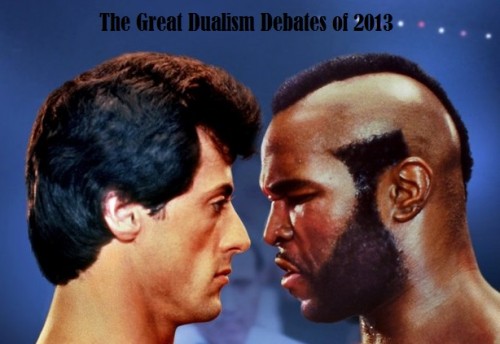 So far, I have been a silent observer of the Dualism debates unraveling over the past few weeks both here on Cyborgology and around The Web (as well as in conference lobbies, coffee shops, and university hallways). Super brief recap: Nicholas Carr is cheezed off at Cyborgologists for their insistence on critiquing digital dualism and digital dualists, and argues that supposedly “dualist” experiences should be taken more seriously. Alternately, Tyler Bickford is peeved that the critique of digital dualism is not taken far enough, and that the Augmented Perspective assumes, incorrectly, that there is some base reality from which to augment. Cyborgologists have worked furiously to address these points, arguing about the role of bodies and emotion, correcting misleading characterizations, clarifying linguistic ambiguities, reintroducing the “Other” theorists, and pushing the theoretical program forward.

All in all, this has been a largely productive endeavor, forcing us to think more carefully about what digital dualism is, what it means, and how we talk about it (like this, for example). Looking at the debates holistically, they also seem quite familiar. In particular, I argue here that technology theorists’ trouble in resolving the dualist/augmentation debate is similar to the trouble faced by gender theorists debating Difference versus Queer perspectives. Quick teaser: Carr’s argument represents the Difference perspective and Cyborgology represents the Queer.

Queer Theory (e.g. Judith Butler, Donna Haraway) works to blur boundaries, eschew labels, and queer classifications.  The bodily experience here is seen as culturally inscribed, and the ways in which one makes sense of the body are essentialized through classificatory linguistic tools (e.g. “Man” and “Woman”). Categorization here is not just problematic because it is inaccurate, but because categorical difference necessarily carries with it power differentials, essentialized and reinforced through the continued obscuring of their performed nature. The project for the Queer Theorist is twofold:  to uncover the role of culture in what seems to be nature and relatedly, to trouble the classificatory systems representing purportedly natural separations.

The Sexual Difference Perspective (e.g. Rosi Braidotti, Elizabeth Grosz, Luce Irigaray) insists on recognition of bodily difference, centered largely on reproduction, and the political necessity of defining a clear category of “woman” in juxtaposition to the category of “man.” In opposition to Queer Theory, Sexual Difference Theorists promote categorization and boundaries, rooting them in sexed experience. One cannot, these theorists insist, ignore experiential differences in clitoral vs. penal stimulation, menstruation, ejaculation, child bearing, and hormonal configurations.

While Queer Theorists problematize categorizations in general, and dichotomizations in particular, Difference Theorists refer back to the embodied experiences—experiences that vary in patterned ways with particular kinds of sexed bodies. Of course, these arguments are highly nuanced, and only straw Queer and Difference Theorists propose the complete abolishment of bodily difference or categorical rigidity respectively.

I argue that Carr’s critique of the Augmented Perspective is similar to Difference Theorists critique of Queer Theory, and the response from the Cyborgologists echoes the responses crafted by Queer Theorists. Again, only straw theorists within this debate argue for a full separation of digital and physical (i.e. strong digital dualism), or non-differentiation (i.e. strong augmented reality). Like the Queer/Difference debates, the arguments between Cyborgologists and their dissenters is highly nuanced.

Here,  the connected subject—the voluntary or involuntary Cyborg, if you will—is this debate’s version of the transsexual, with each side commandeering the experience of the Cyborg for its own ends. Carr argues that by compulsarily blurring the boundaries between physical and digital, insisting that dichotomies between the two are false and  crucifying the “Digital Dualist,” the Augmented Theorist dismisses experiential realities, bodied discomforts and felt tensions, in favor of privileged and elite presumed theoretical expertise. Carr articulates this critique in the passage below:

Jurgenson’s real mistake is to assume, grumpily, that pretty much everyone who draws a distinction in life between online experience and offline experience is in the grip of a superiority complex or is striking some other kind of pose. That provides him with an easy way to avoid discussing a far more probable and far more interesting interpretation of contemporary behavior and attitudes: that people really do feel a difference and even a conflict between their online experience and their offline experience.. the arrival of a new mode of experience provides us with an opportunity to see more clearly an older mode of experience. To do that, though, requires the drawing of distinctions. If we rush to erase or obscure the distinctions, for ideological or other reasons, we sacrifice that opportunity.

In short, Carr argues there is no way to make sense of dualist experiences without dismissing those who proclaim such experiences as cultural dopes.

Queer Theorists, in response to the charges of Difference Theorists, argue that far from dismissing the body, they work to disentangle bodied experiences from stifling labels that necessarily miss the nuance, idiosyncrasies, and complexities of the corporeal. They argue instead for the open recognition of language as an always imperfect tool, an agreed upon system that, to be useful, must always be in flux, always be playable and pliable. So too do Augmented Theorists resist critiques of elitism and dismissiveness. They recognize that felt tensions in an increasingly connected (though always augmented) world are well founded and even part of their own experiential engagement with this world.  The point, they/we argue is not that digital and physical are the same, nor that concerns over their relative roles in social life are unfounded, but rather, that the ways in which we categorize modes of being are always imperfect, and that characterizations of digital or physical, virtual or material, necessarily obscure the ways in which each constitutes the other.

The Augmented Perspective, like the Queer Perspective, is a project of illumination. It is an argument for linguistic fluidity and playfulness, with a concomitant recognition that rigid classifications are both essentializing and mischaracterizing, while obscuring overlaps, boundary breaches, and co-existence in favor of mutual exclusivity and zero-sum depictions.

*As a final note, I found that I ran into a linguistic difficulty in writing this post. I had clear labels with which to describe the two gender theory camps (i.e. Queer and Difference), but no such labels for the camps within this debate. The reader may note that I chose alternatively “Augmented Theorists” and “Cyborgologist” for the Jurgenson et al. side, but left the Carr et al. theorists unnamed. This is because my natural inclination, as an Augmented Theorist, is to label the dissenters “Dualist.” This is highly value laden and embedded in set of assumptions with which half of the argument—in particular the half I am trying to name—would disagree. Suggestions in the comments section and/or on Twitter will be greatly appreciated. *

Jenny Davis is a regular contributor for #Cyborgology and hopes this conversation will continue  on Twitter: @Jup83

I come at this from an entirely different framework so Imay be a bt reductive.

The value of the ontological discussion is in my view, limited to one point. Does one believe that there is some Ideal, Ground of Being, Essential X that exists-in-and-of itself,in a self sufficient way and that this form of existence has the effect of ordering the rest of contingent existence?

Or is everything that exists contingent,including the concept of contingency, that categories may have local or conventionsl truth, but not Ideal Truth?

Whether one believes in Science, God, Mind, Atoms, Bits or anything else, as the Ground of Being etc. one is an ontological dualist.

It may also be that the one adopts the contingency view more aspirationally than in full fact. The vividness and immediacy of our interiority/consciousness/awareness makes the Ideal seem quite natural.

Love this: " perception of the world (epistemology) isn’t necessarily a sure fire way to evaluate the reality of the world (ontology)"

The danger, of course, is the dismissal of experience. I want to be clear that experience matters. It matters at a lot. It is very much real. With that said, I think ontology is always a moving target, always imperfectly understood. No epistemology (experience or otherwise) perfectly "finds" ontology. Moreover, epistemology and ontology have a mutually constitutive relationship. The nature of things affects how we come to know those things, and how we come to know and make sense of those things changes their very nature.

[...] boundaries between two binary pairs: the subjective/objective and the physical/digital. However, as Jenny Davis cautions, this collapse should avoid the total erasure of [...]

I think 'Queer Theory' itself is a bit of a 'dupe'. The term is used to include writers and thinkers as disparate as Butler, Paglia, Foucault, Bersani, Freud, Halperin, Lacan, etc.

or b) that, with all huge and utterly awe-filled respect, that Jurgenson et al have quite developed their 'theory' as well or as fully as Butler, Foucault, Bersani etc.

[...] “characterizations of digital or physical, virtual or material, necessarily obscure how each constitu...” [...]

[...] ideas around both digital dualism and augmented reality. In light of some really excellent work by Jenny Davis (@Jup83), PJ Rey (@pjrey), and Tyler Bickford (@tylerbickford), in addition to some old-fashioned [...]