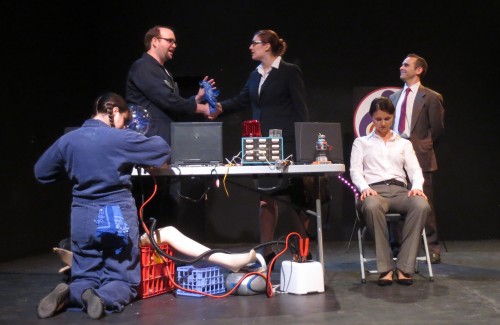 R.U.X. (Rockwell Universal Sexbots), written by Maurice Martin and directed by Sun King Davis, was first written and performed as a charity effort to raise money for HIPS (Helping Individual Prostitutes Survive); it ran as a five-part serial in Arlington’s October 2011 Hope Operas. It was rewritten as a full play for DC’s 2012 Fringe Festival, where it took the award for best comedy. The show just finished up a brief encore at Fall Fringe. While this comedy has already been widely and positively reviewed by DC theater critics, it deserves a piece that engages its rather weighty themes.

The story takes place in near-future America (similar in setting to the spate of early twenty aughts robot films such as Bicentennial Man, A.I., and I, Robot), where anthropomorphic robots have become a common consumer product. Louis Rockwell Jr. (John Tweel) has just been made acting CEO of the Rockwell Universal Carebots company, after his father (Frank Mancino) fell into a coma. Louis Jr. has a new vision that would transition the company away from producing robots designed for childcare and, instead, move it into designing robots for—you guessed it—sex.  After rebranding the company “Rockwell Universal Sexbots,” he hires Dr. Callie Veru (Aubri O’Connor), a young and romantically inexperienced software expert to program the robots with the capacity to fulfill human desire. To program robots to respond to human desire, however, the characters must first understand it, and this interrogation of human desire becomes the axis on which the entire plot rotates.

Initially, Dr. Veru, with the help of Gary Stator (Adam R. Adkins), R.U.X.’s chief hardware engineer, attempts to program the robots using romantic tropes from movies and magazines.  However, it is quickly decided that, rather than having robots play out Twilight-esque fantasies of unconsummatable love, customers will prefer robots that simulate real humans. Here, of course, is where it gets tricky. What defines humans as human? And, why would we pay for the company of a robot if robots were indistinguishable from the humans that are already around us?

The designers realize for robots to be more desirable than humans, they have do something that most humans can’t or won’t do: They have to both interpret and reflect our own desires. By giving robots this sort of adaptability, they are made “universal”—they can evolve into the perfect love object for anyone. It’s not enough for a sexbots to want what their users want; they must want what their users want them to want. Desire is dynamic and so too must be its embodiment. These robots become a mirror whose images is tweaked and inverted so that we see, in it, the personification of our own desire. In essence, we don’t want robots to be real; we want them to be what Baudrillard called “hyper-real” (more real than real)—a human that exists solely for us. It would be impossible to ever find such a human; instead, this human must be simulated. 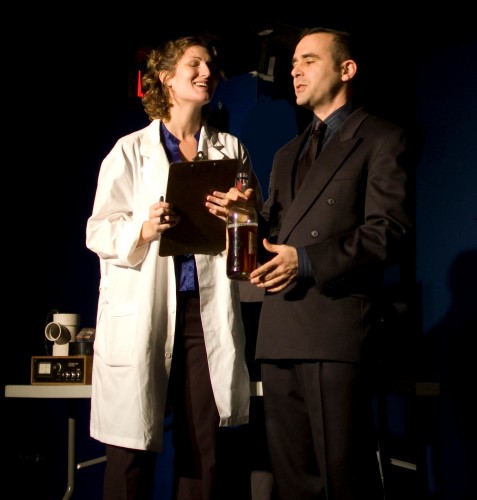 However, as we might expect, the characters’ attempts to create these hyper-real love objects end in folly. It would have been easy to end this play with the tired sci-fi trope that humans are fallible so shouldn’t play god—these sorts of biblical overtones were present throughout R.U.R. (Rossum’s Universal Robot), the 1920 Czech play that inspired R.U.X.. Instead, Martin makes a fresher and more philosophical observation: We can’t program machines to fulfill all our desires because our desires themselves are often competing and contradictory. It’s not human fallibility that comedically disrupts the characters’ scheming; instead, the characters are foiled by the complex and irresolvable nature of human desire.

The scenario that most poignantly captures the contradictory nature of human desire comes when X-1 (Amie Cazel), a robot designed to fulfill the all of Louis Jr.’s desires, murders Louis Jr.’s father after his father awakes from a coma and intends to reclaim control of the company. Louis is plunged into a state of seemingly-insurmountable regret because his desire to be a successful businessman has so deeply conflicted with his desire to be a good person. He projects blame and anger on to X-1 (who he is ultimately responsible for creating in the first place). X-1, in turn, is left wrestling with the paradox that Louis now desires only for her to be miserable. Because the only thing that makes her happy is to fulfill Louis’ desires, she must make herself miserable in order to be happy. 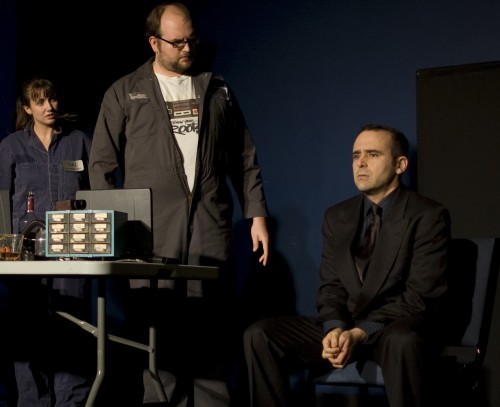 Despite the deftness with which Martin parses out these complex philosophical issues pertaining to the nature of human desire, the play often walks (and sometimes crosses) a very thin line between satirizing and reinforcing offensive stereotypes, including the portrayal of women as emotionally needy and of Japanese culture as perverse and erratic. In some cases, the play turned a critical eye to such stereotypes, reminding us that indulging in these stereotypes is often indicative of some flaw in the character of the beholder; in other cases, however, the play itself seems to indulge in offensive stereotypes.

I found one character particularly distracting: Happy Hoshi (Momo Nakamura) is a Japanese sexbot acquired by R.U.X. for market research. She runs on stage yelling about how she excretes rainbows and uses her sexual organs to play musical instruments. The character capitalizes on the kinds of mistranslations that provided endless amusement in early Nintendo games, but this is embodied by an over-sexed young woman in a way that makes virtually everything the character says and does seem sexist. Were this fact explicitly addressed, it might have played differently; instead, the audience is asked to laugh along with the sexism (and, predictably, they did). From my perspective, however, Happy Hoshi undermines the otherwise thoughtful narrative like a culturally-insensitive Jar Jar Binks.

The play also suffered from a bit of schizophrenia. The first half was mostly a light comedy (with occasional slapstick elements), but this comedy, at some point, starts to transition into a contemplative drama. One can only assume this disjuncture is a vestige of its origins as a serial production. The problem is that we are asked to believe that a crude, flat character like Louis Jr. suddenly transforms into an afflicted, dynamic antihero. It just wasn’t terribly convincing (despite Tweel’s admirable effort). It’s as if The Office’s Michael Scott made a guest appearance on Mad Men.

The plays themes may have been better served by tragedy than comedy. I would have preferred to see Louis Jr. seek atonement by killing himself and X-2. Or, perhaps, X-2 would kill Louis Jr. because that was his deepest desire in a state of chronic depression. Louis Jr. was just not an easily redeemable character and his survival left the plot unresolved.

Interestingly, the play was slightly rewritten for Fall Fringe. In the earlier version, the theme of the death was more prominent. X-2 (Ben Gibson/Ricardo Frederick Evans), the sexbot designed for Dr. Veru, constantly (and humorously) crashes every time he realizes that Dr. Veru will one day die. 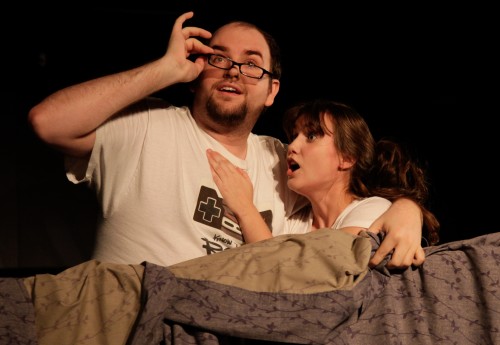 Apart from X-1 (who is marvelously performed by Cazel), the most dynamic and believable characters are Gary and his robot girlfriend Gal (Amy Kellett). Gary allows Gal to edit her own source code so she becomes self-directed (though instead of using this power to incite a BSG-style robot apocalypse, she simply marries Gary and they live happily together until his death). In fact, robots have no need to kill off humans because sexbots so fully satisfy human sexual desire that they are no longer interested in having sex with other humans. No human sex means no human reproduction, and, 153 years later, the human race slips contently into oblivion. (I’m pretty sure the desire to have sex and the desire to have children aren’t quite so tightly bound, but it’s an amusing scenario.) Upon the death of the last human, Gal discovers that, in a final act of love, Gary has surreptitiously programmed her with admin rights to all other robots, and she becomes the matriarch of a new robot civilization.

The cast’s original performance at Fringe was significantly tighter than the short Fall Fringe run, where several of the actors seemed to stumble on their lines. Also, Ricardo Fredrick Evans (who delivered a compelling performance) replaced Ben Gibson (who was, nevertheless, a more convincing idiot).

Despite my many misgivings, R.U.X. is an extraordinarily thought-provoking piece of writing that transcends the standard tropes which land most robot stories in sci-fi purgatory—enough so that I saw it twice.