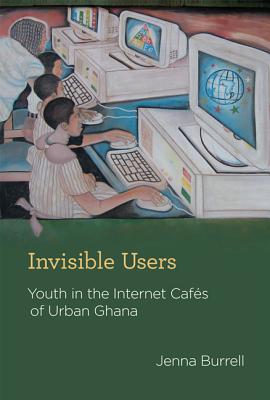 The theory and policy of Internet connectivity has not kept pace with the increasing diversity of network access. The full variety of access points, social practices, and meaning created by networked individuals has not been critically engaged by most authors.  Jenna Burrell’s new book Invisible Users: Youth in the Internet Cafe’s of Urban Ghana is the start of a major corrective in the social sciences’ treatment of the Internet. For “nonelite urban youth” the internet café provides an opportunity to extend one’s social network outside of the zongo (colloquial term for slum) that they grew up in, and gain access to resources and contacts they would otherwise never acquire. A majority of Burrell’s work takes place in these cafés but we are also treated to a discussion of global ewaste streams, international consortiums on the “information society” and the collective reputation and shared meaning of Ghanaians  on the Internet. Burrell provides a broad, but at times penetratingly deep look at the Internet from the margins. Burrell describes internet café’s as “indeterminate spaces” that refused to “appropriate” the internet by making a uniquely Ghanian space, nor did it attempt to transport the patrons to a totally new world. The space was part of a “particular strategy of handling the distance between imagination and action.” The internet café was not neutral per se, but it did offer a new space that was relatively free from the control of older family members. In a culture where older generations have unquestioned authority over youth, the Internet café offered a domain of relative freedom of expression and action. She is careful to note that these spaces are probably not “destined to become the sort of café-as-third-place thought to play a role in civil society formation, rather the expense of timed access and the allure of foreign contacts means everyone pays attention to their screen with rare invitations to check out an offer for free CDs or the transcript of a Yahoo! messenger conversation.

The acquisition and  collection of goods and personal connections from over-seas is particularly important for many young Ghanaians. From computer games to T-shirts, Ghanaians  displayed a “fascination with abroad and with whatever evoked travel and connectivity with foreign lands. Airline membership cards and CDs or books by mail personalized with a name and address provided this sense of global interconnectivity that was far more compelling to young people than the gambling games the CDs contained.” Whereas most authors describe the Internet as a geography-annihilating force, Burrell’s account of internet cafés explicitly rejects the “unwarranted assumptions about the homogeneity of receiving populations” and demonstrates how the Internet can be seen as a “foreign commodity.” For young Ghanaians  the Internet brings the world “closer” but it also makes place more important, not less.

Young Ghanaians  are not only looking for foreign goods, but contacts as well. Establishing regular contact with fellow Internet users across was a main component in “enacting a more cosmopolitan self.” Burrell opens her book with an interview between a young woman and her new Canadian husband. The couple met online and due to visa complications their relationship has largely remained computer-mediated. This long distance relationship, while not ideal, is a minor success story both romantically and financially. Foreign contacts, while having a very pragmatic dimension to them, were also meant to be sincere and durable.

The reactions many Ghanaians receive when they attempt to reach out are hostile and suspicious. Part of it is warranted- the infamous “Nigerian prince” scams are not limited to their namesake country. Côte D’ivoire, Ghana and the rest of Western Africa is associated with internet fraud. In Ghana, such practices are “referred to locally as 419 (Nigerian police code for fraud) or sakawa (a vernacular term from the Hausa language)…” The scams occupy a very complicated role in Ghanaian youth culture. While 419 scams rarely work, the rumors of successes make them very popular. Many Ghanaians  hope to pull off one successful scam so that they may parlay the winnings into a legitimate business. A few thousand dollars is enough to buy a truck or another expensive resource that can be used to start up a new business. 419 scams have consequences for Ghanaians  not actively involved in criminal behavior. Popular travel sites like Expedia and Travelocity will not sell tickets to Accra and Ghanaians in search of contacts and goods are often rudely turned away.

Much to the chagrin of well-meaning penpal seekers, the scammers reinforce the Western perception of Africans as needy poor people, greedy scam artists, or corrupt politicians. Potential connections end before they begin as soon as Ghanaians  reveal their “real” identity. Burrell concludes her chapter on internet scams by saying:

“In the end, the potential for the empowerment of marginalized groups through new media technologies relies on producers who represent themselves in authentic as well as strategic ways. The problem of authenticity and its seeming incompatibility with persuasive self-performance was significant to Accra’s nonelite Internet users…The question thereforeis what conditions facilitate empowering self-expression and what conversely provokes individuals to become complicit in their own damaging self-representations?

This is one of the central points of the book. As the unmarked category, Western internet users have significantly less influence on one-another. In other words, my actions online do not affect another American as much as one Ghanian’s scamming activities effect another’s search for a foreign penpal. Ignorance of such differences was on full display at the World Summit on the Information Society (WSIS) held in Accra in February of 2005. Burrell spends a chapter reviewing the conference and comparing it to her own observations. She notes that “speaking about Africa through the lens of poverty and development has consequences for representations of Africans.” Burrell rightly points out that this paternalistic attitude toward African countries misunderstands the realities of Internet use and gets in the way of productive work. The way she describes the WSIS sounds eerily familiar to the way the New York Times described the “New Digital Divide.” Burrell’s critique of this language is similar to the ones that Nathan Jurgenson and the rest of us have levied in the past. She writes, “Avoiding this black hole of thought is an effort to avoid the analytical impoverishment that such insistence on a presupposed normative order imposed by conventional models of development [demands].”

While many Western authors see the internet as a force for dividing and individuating, the Internet appears to be competing with major religions for the same sorts of tangible and pragmatic necessities. Burrell writes, “Much like Internet use, religious practices were perceived as a set of techniques allowing individuals to extend themselves exerting a more powerful force of influence over broader social terrain.” Computers had the same metaphysical properties (and geographic origins) as the contemporary Christian and Muslim faiths that offered connections to international networks and the promise of economic prosperity.

Ghana and Ghanaians relationship to the Internet does not end (or even begin) at internet cafés. Ghana is one of the major global sites of ewaste in the world. The physical artifacts that bring the internet to millions have an excellent change of eventually ending up in Ghana, either as repurposed café computers or as scrap that is dismantled and sold for precious metals and parts. The industry is large and continues to grow as more computers are thrown out at a faster pace. This unique relationship with the “information economy” means that while Westerners can enjoy a “post-industrial” economy, many nations in the Global South must deal with its the toxic, lead-filled byproducts. For Ghanaians  the information economy (or the information society, or the post-industrial economy, or whatever you want to call it) has a very real and present material component.

Burrell titles her final chapter “Becoming Visible” and catalogues the ways in which marginal users, are both deeply affected by Internet policy in the United States. Internet neutrality debates mean just as much, if not more, to Ghanaians as they do to North Americans or Europeans. Creating a tiered Internet could mean shutting out those users that have just gained access to the world wide web. She also calls for “scholarship on technology development and diffusion and on the construction of ‘the user’ to encompass the full diversity of political-economic processes.” I would like to add to her call by also noting that the mobile web (something that has risen astronomically since Burrell completed her field work) is not subject to the same net neutrality regulations as the wired net. As Tolu Odumosu and Venkatesh Narayanamurti have noted, the burgeoning LTE market could be a series of walled gardens and not the digital agora we are used to. In many ways, net neutrality was defeated by providing a slightly different service through a totally different physical infrastructure. Again, Burrell’s focus on the materiality of the Internet becomes useful here: the hardware is not incidental nor does it disappear as users interact in a realm of bits. The Internet has very physical components to it, and this characteristic becomes more noticeable (and important) as your connection becomes more tenuous and marginal.

Jenna Burrell’s “Invisible Users” is one of the few texts explicitly dealing with the Interent that will not feel dated in five years. Her approach, focusing on the social action that is enabled and constrained by and through the technology, will keep her book relevant until the challenges she poses are solved or new challenges supersede them. While the content is excellent, they way she approaches the subject matter both methodologically and conceptually is her greatest achievement. There are no long ruminations about the constraints of the Yahoo! messenger interface. Science and Technology Studies and related fields would be well served by taking up Burrell’s call for pluralizing the concepts of users and the net. In so doing, we will move beyond a privileged and shallow depiction of what digital devices are capable of and finally begin talking about what it means to live in a digitally augmented world.