Fear of Being Missed

Sweaty palms. Racing heart. Mind wandering to extreme and alarming places.  No, this is not a horror movie or a bad dissertation dream. This is Fear of Missing Out (FOMO).

FOMO is a colloquial phrase to describe the anxiety people feel in light of constant streams of information. Not only are broadcast news cycles 24 hours, but so too are social news streams. All day, at all times, the Facebook and Twitter tickers move forward, populated by people, information, and interaction. These streams go on with or without us.  It is impossible to keep up. And yet, widespread access through home computers, work computers, smart phones and tablets tempt many of us to try, often wavering between frenzied efforts stay afloat, and resolutions to let the digital world spin without us, determinately avoiding connected devices with clenched jaws, white knuckles, deep breaths, and quick sideways glances full of both longing and animosity.

I experienced FOMO first hand during last Tuesday night’s second presidential debate. I watched the debate at my Mother in Law’s home, and for a variety of reasons (most of which were my fault), I was not able to access the internet.  While I spent most of the debate screaming at the TV along with my viewing mates, something happened as the debate approached its end. Perhaps it was Candy Crowley live fact-checking Mitt Romney. Perhaps it was the culmination of quotable lines and snarky opportunities, gone by in my digital absence. Perhaps it was the  hilarity of those in my viewing party, trapped in the confines of the physical space, replicable only through the flimsy and fleeting hardware of human memory. Regardless, at one point, I found myself  no longer screaming at the candidates, but plaintively wondering: “OHMIGOSH WHY AM I NOT ON TWITTER RIGHT NOW!??!” 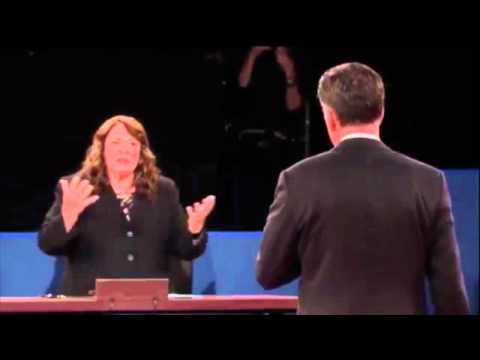 I knew Twitter and Facebook were exploding, and that I was missing it. This realization was sharpened by the once-every-four-years nature of this particular media event. I fretted because I could never go back. I could never be part of this collective live-tweet energy.

But this fret was more than just Fear of Missing Out. Yes, I wanted to see what everyone was saying, but I also knew that the vast majority of people would not be saying much of substance. This applies even to the smartest members of my network.  I knew, with relative certainty, that the conversation would have devolved into partisan taunting and jokes about women in binders, just as conversation surrounding the first debate devolved into Big Bird references, and just as the vice presidential debate devolved into comparisons between Paul Ryan and Pee-wee Herman (obviously, the devolutions would be different for those with connections from different political orientations, but devolutions nonetheless).

No, this was not just about missing out. This was also about being missed. I wanted to partake. I wanted to reply. I wanted to make a bad joke about presidential candidates and bickering children. In short, I argue that FOMO has a counterpart: FOBM—Fear of Being Missed. With the 24 hour social news cycle, and the constantly moving Facebook and Twitter streams, it is easy to get buried, and easy to be forgotten.  The anxiety surrounding disconnection therefore revolves not only around missing out on content and information, but also around potential exclusion from the conversation and worse yet, exclusion from the collective purview altogether. Such exclusion is not temporally localized. Indeed, interaction begets interaction, and dropping out now can (and likely does) mean exclusion later.

I argue further that FOBM is tied up with the inevitable conversation devolution that I described above. To be sure, Twitter and Facebook can, and often do, facilitate meaningful conversation. However, they also move fast and connect broad audiences with varying interests, varying knowledge bases, and different levels of willingness to read/respond to complex content. As such, catchy, funny, easily sharable and easily quotable materials are the darlings of social media platforms. Users can easily produce, consume, and spread these materials, with little cognitive effort. Such materials enable users to remain competitive in a dense attention economy. Such materials facilitate a quantitative increase in visibility and presence, though often at the cost of quality and depth.

I conclude with some questions for further exploration

Jenny Davis is a doctoral candidate in the Department  of Sociology at Texas A&M University. Follow Jenny on Twitter @Jup83

i had this feeling very strong at a talk and no access to Twitter (dead phone) and seeing all those heads buried and thumbs typing in the crowd was frustrating!

"participatory subjectivity is not constituted through the imposed threat of an all-seeing vision machine, but by the constant possibility of disappearing and becoming obsolete."

[...] Davis (@Jup83) recently highlighted the incentivization to share with her concept of FOBM, or “fear of being missed.” FOMO, “fear of missing out,” is the anxiety we feel when we can’t keep up with [...]

[...] weeks ago, I wrote about the “fear of being missed (FOBM).” The flip side of FOMO (fear of missing out), FOBM captures the anxiety surrounding a complex [...]

[...] Davis (@Jup83) recently highlighted the incentivization to share with her concept of FOBM, or “fear of being missed.” FOMO, “fear of missing out,” is the anxiety we feel when we can’t keep up with [...]

[...] has made its users fear the possibility of leaving its platform. A close counterpart to this is FOBM (fear of being missed). I’ve also found myself experimenting with training and untraining my [...]

[...] of gestures, why the emotional impact of social media isn’t predetermined, why we might feel distressed when cut off from digital interaction, and—importantly—how we can not only come to know but also come to [...]

[...] frustration” is like Jurgenson’s “documentary vision” plus Jenny Davis’s (@Jenny_L_Davis) “fear of being missed” [or FoBM] all rolled up into one, combined (of course) with a little tongue-in-cheek metavexation over the [...]

[…] nature of potent symbols: we have other fears to which Glass may present itself as a remedy. We fear missing out on what transpires online, and Glass promises to bring the Internet right in front of our eyes so […]