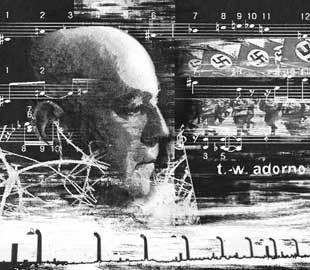 Many have linked political conservatism with “the authoritarian personality,” which, in part, involves the willingness to view power structures as legitimate, less reluctance to submit to those in authority over you, and an increased tendency to exercise authority over the less powerful. Social media is often seen as counter-authoritarian, however, we also have good evidence that the Web in general, and social media in particular, also replicates existing power structures.

With these different concerns in mind, we might wonder if those with different political orientations use social media for politics in different ways. More specifically, are those on the right, even in a social media environment that permits more expression, voice, and creativity, more likely to submit and follow? Theodore Adorno, pictured above and pioneered work in this line of thought, I think, would predict that Republicans would be more passive, more likely to listen and restate, whereas those on the left would be a bit more likely to create new content.

I post these very brief thoughts (certainly much more would be needed to substantiate the sweeping claims I just made above; this is only a short blog post!) because The Pew Internet in American Life Project just today released some new findings on Social Media and Political Engagement [pdf]. Here are most of the findings:

These last two points get at political behavior that is more about listening and restating someone else’s content is more associated with the political right, whereas measures that focus on creating unique content are more balanced or lean a bit left. This is only one survey, so I want to recognize that it would be a stretch to draw strong conclusions here. However, this does mesh with previous research that has linked political conservatism with “the authoritarian personality” (e.g., see Bob Altemeyer’s terrific work).

On the other hand, we should recognize that the main measure of creating new content did not point strongly to the left or the right. Further, even these so-called ‘passive’  (to be clear, *I’m* the one calling these measures “passive”, not Pew) are not completely passive. “Following” someone on Twitter, for example, is indeed about listening and consuming content, but I’ve always thought “follower” is an unfortunate term. One can “follow” someone without passively consuming their content; one can disagree and do many active, productive, things like comment, favorite, retweet and so on. Further, the percentage-differences, between around 5-10%, are, in my opinion, substantive, but certainly not massive.

All that said, I do think this points to some interesting research questions for future thought. I’m especially interested in the idea that, when encountering political content, liberals are more likely to “like” whereas conservatives are more likely to share or repost. What is behind that? Is it that those on the left, whom are more anti-authoritarian, feel that simply reposting content is a threat against their autonomy? Both a “like” and a repost help perform the political-identity we want to construct, to demonstrate our individuality, however, a repost is also about submitting one’s identity performance to the words of another.

Last, since I’m being so speculative here, I’d appreciate if any readers could point me to more formal research on this topic in the comments. Thanks!

No constructive suggestions, but...

I cannot tell if the Pew results are controlled for age. I would think that habits such as like vs repost are ones we absorb from our cohort, and if there is a young/left vs old/right slant to the respondees then that might be as much to do with it as anything.

Also, I strongly dislike the idea that listening = passive. Some of us, myself included I think, like to read/listen/reflect a lot before saying things (odd blog comments like this one don't count!) and are a bit slower than others to respond to events with opinions. But that doesn't make me passive, I hope.

Liberals tend to want to appear to be independent thinkers, that seems to be true. But the performance of independent thought does not a divergence from authoritative belief make.