(This post originally appeared at Peasant Muse on 17 October 2012)

Alexis Madrigal has a very interesting article over at The Atlantic on a topic he calls dark social, or web traffic driven by non-referred sources outside of those generated on traditional social platforms. Even though the dominant narrative places the innovative crown of web-connection on sites like Wikipedia, MySpace, Facebook, and so on, the article provides undeniable proof that so-called ‘dark social’ forces- links shared over gchat, email or personal connection- actually drive the majority of web traffic.

Madrigal interlaces his data-backed revelations with anecdotal tales on his use of 90’s era communicative platforms like ICQ and USENET to share links with his friends, the contrasting effect meant to convey a sense of experiential validation on the larger thesis of the piece. If almost 70% of traffic occurs through means outside of those facilitated by, say, ‘liking’ and ‘sharing’ something on Facebook or retweeting an interesting link shared on Twitter, then what does that say about the narratives telling us how we use the web? On a larger level, what does inclusion of this ‘dark social’ data say about our levels of perception and the limits circumscribed therein?

I think it says that we are just beginning to understand how our constant activity of being social in existence- not just on a platform- shapes and drives our measurable presence on the web. I also think Madrigal is correct in his stylistic choice and logical juxtaposition of narratives driven by data and experience because it is easy to conflate the two in our digital world, even though the first is limited by our perception of what counts as web traffic and the second is a more authentic description of the lived reality behind the web traffic. One has to describe their anecdotal experience of link sharing precisely because this ‘through a social, darkly’ behavior is not actively measured by our current generation of analytic tools.

What this suggests to me is that we need to engage in far more ethnography of the link. The bits of data, the shared cultural units, are not ends unto themselves. The rituals behind those acts of sharing- the reading of email, the dialogue of gchat- all require a larger presence in our analyses if we are to understand this ‘dark’ behavior. But that’s not all. What occurred to me while reading this piece is how the core issue exposed, that our sweeping range of quantifiable social perception is limited to such a degree so as to render entire behaviors ‘dark’, has much in common with the ongoing debate surrounding the role and purpose of the Digital Humanities. There is a lot of talk about what the digital humanities are and what defines their use, but I think these are misleading questions that are both unproductive and illusionary in their symphonic promise of clarity. Much like Madrigal’s discovery of ‘dark social’, the key thing we need to keep in mind when discussing the digital humanities is that our understanding of what the field means and sources for its definition are chiefly limited by perceptional capacity or measured results. Knowing this, we should take a cue from Madrigal’s piece above and instead devote a portion of our analytic inquiry towards pursuing ethnography of the digital humanities act itself.

I want to take a moment and explain what I mean by briefly examining the relationship between game studies and the digital humanities.

Stephen Ramsay famously stated that building and making were the hallmarks of digital humanities work, and while he included a place of respect for the field of game studies in the pursuit of humanistic inquiry, he regarded it more as an inquiry on reading and less than an inquiry on making. Some might find this a convincing narrative. Regardless of that fact, it is nonetheless an incorrect narrative that ignores a fundamental quality of game studies- studying the act of play.

Earlier, on Twitter, I was included on a discussion about the idea of perma-death (permanent death) in game design and how the mud-dev forums contained an epic thread on the issue. 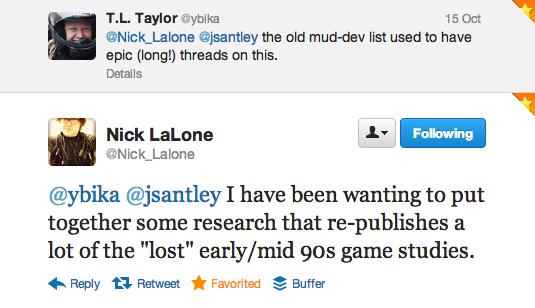 Nick LaLone replied that he wanted to put together research “that re-publishes a lot of the ‘lost’ early/mid 90’s game studies’, the implication being that our current critiques are lacking in recognition of earlier efforts, the ‘dark’ 90’s being the example displayed here. Our vision, our perception of the game studies field, is necessarily lacking until we at least uncover these lost sources. But there is something deeper here- the idea that these sources might speak to the act of play and in doing so become far more valuable in this role than they could as just simple, dated observations. Game studies inherently understands the need for good ethnography, because good ethnography is at the heart of understanding play.

In my own research with board games, I’ve found user created forums to be invaluable portals into the motivations behind creation of game modifications or debates on the alignment of design mechanics and theme. What gives these sometimes-odd assortments of messages and debates credibility are their linkages to the active process of play. Players create from their ludic experiences narratives that, in turn, inspire the creation or analysis on game-effects generated through play. This is far more active process than that required of simply reading the rules and inferring the intent of design mechanics, or ‘surveying the data’ if you will. It is also a process filled with potential ethnographic insights into cultural perspective and the larger workings behind integrating symbols and meanings into a coherent experience.

By performing ethnographic analysis of the play act itself, this ‘dark’ ludic experience can increasingly become revealed. Analyzing player written After Action Reports (AAR’s), or reviews of game sessions, can yield fascinating insight into how play connects embedded cultural narratives to historical interpretations. Player created modifications, such as translating game materials into another language or introducing new materials or rules, and their dependency on digital networks of today is yet another avenue where one can analyze the bulding/sharing/deforming process tied to games as cultural artifacts. Where Ramsay saw reading, I see more. But, again, we return to questions centered on levels of perception and the limits circumscribed within.

Now Ramsay equated game studies as directed more towards humanistic reading and less towards humanistic building at his ‘own peril’. I suspect he included the caveat because he understood that by endorsing building over reading there was an implicit acknowledgment that something new always lay over the horizon. Mark Sample goes so far as to say that digital humanities isn’t about making or building at all; it’s about sharing- maybe even breaking or deforming– what we study. “When something breaks, it makes a beautiful sound,” read the lyrics of ‘Blue Arrangements’ by the Silver Jews, and I can’t help but think Sample would agree.

This optimistic note sounded by Ramsay and Sample in the pursuit of a productive digital humanities definition finds resonance in the tone of Madrigal’s piece, especially when he includes personal details associated with his nerdish delight upon discovering the degree of influence ‘dark social’ wields. It’s the same feeling I get when studying how the active process of play shapes someone’s conception and reflection of the past. It is never a question of how good your data is, although good data is essential to good analysis. It is always a question of how good your questions are, and whether those questions will probe and ply your data to not only reveal new insights, but perhaps also demonstrate the limit of what insights your data can provide

Underlying each of these positions is the discovery that our process- in creating social acts or building/breaking/sharing digital humanities projects- is more important and more informative when we take into account the experience and not just the data. Defining and measuring data might sound active, but it’s really static. Doing is active. Sharing is active. Building and breaking are active. And to understand both the digital humanities and social behavior better, we need a wider perspective that includes an ethnographic approach at its core.