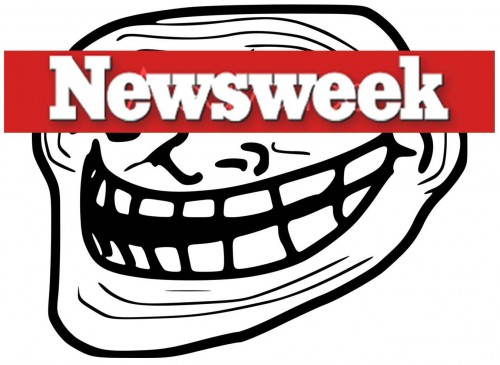 In light of the recent Newsweek magazine cover scandal, let’s think for a moment on what a “troll” is and when we should or should not call someone or something a troll. My first reaction to the Islamaphobic cover was “trolling. ignore.” That was the exact wrong reaction.

Trolls, of course, are those who deliberately post inflammatory material in order to disrupt or derail discourse. Declaring something or someone a “troll” is a way of saying that they just want attention. Trolls attempt to disrupt productive communication in an attempt to get noticed. The one thing you need to know to do when this happens: don’t feed the trolls. Don’t. Feed. The. Trolls. It’s good advice. However, because of its mainstream position, I do not think Newsweek is a “troll,” even if it sure as hell is acting like one.

Go read the better news outlets for more of the story, but the short of it is that Newsweek magazine, a once-trusted source of important journalism, and still a ubiquitous presence on magazine racks across the United States, has recently stepped up efforts to be more provocative and confrontational. Just this year they ran a cover with a terrible photo of Michelle Bachmann, declared Obama “The First Gay President”, and this week, worst of all, there is the controversial image proclaiming so-called “MUSLIM RAGE”: 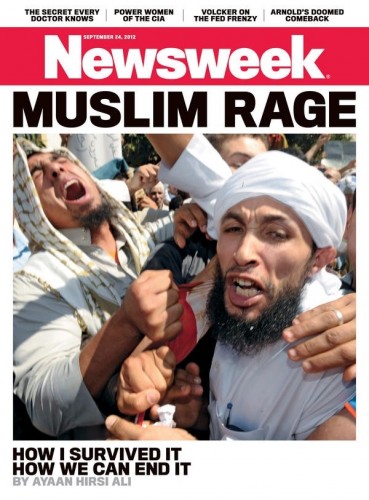 The reaction from so many, including lots of very smart people, has been to say Newsweek is trolling; and, thus, the appropriate reaction is to not pay attention. Remember: we Don’t. Feed. The. Trolls. Newsweek seems desperate for attention, so ignore them, and we’ll all be better off. Salon ran a story earlier today titled “Newsweek trolls again with MUSLIM RAGE”, beginning with,

Look, we all know Tina Brown, editor of Newsweek, is simply trolling us, because trolling is the only way for a weekly newsmagazine to get any sort of attention anymore.

One important characteristic of trolls is that they are outliers trying to hijack the mainstream conversation. Newsweek can’t derail the central discourse because it is (unfortunately) part of the center of that discourse. Newsweek can’t troll this topic any more than I can troll my own blog, regardless what I post. Those smart media pundits saying Newsweek is trolling forget the magazine is part of the mainstream conversation. Many forget that, even though they removed Newsweek from their finely tuned and abnormally selective news diets, the magazine continues to exist, racist cover and all, in front of millions paying for their groceries. Those of us following sharp journalists on Twitter and scanning political blogs forget that millions continue to either read Newsweek or at least scan its covers to get a sense of global politics. Newsweek‘s circulation is around 1.5 million according to Pew, to say nothing of their website and social media streams.

Simply, Newsweek is mainstream. And we should not ignore mainstream news outlets.

Calling Newsweek a “troll” and saying not to “feed” it with attention, even negative attention, forfeits the bigger, mainstream news conversation to these reckless news magazines. A couple of days ago there was a popular post by Joel Gascoigne that received lot of attention called “the power of ignoring mainstream news” that touched a similar nerve in me. I agree much mainstream news, including Newsweek, is problematic, but that is exactly why we shouldn’t ignore it. Don’t overlook it, critique it. Work to make it better. Don’t concede involvement with the mainstream discussion much of the country will have in order to be so self-satisfied with your own personal news diet. We have a responsibility to pay attention, be critical, and call out powerful narratives when necessary. The influence these outlets have is real.

To be clear: never feed the trolls. The fact that we need to take on (that is “feed” or give attention to) mainstream outlets like Newsweek is precisely why we should not call them “trolls.” Even if their behavior looks a lot like trolling. Trolls derail the established discourse, and, like it or not, Newsweek is part of that discourse for much of the country. By calling Newsweek a “troll,” one is excusing oneself from engaging mainstream conversations and is thereby doing nothing to make them better. It excuses us from taking on (“feeding”) these voices of power. No, pay attention to Newsweek, beat it up, and perhaps then it’ll be knocked so far from the mainstream that we can finally stop feeding them.

The sadness is that Newsweek used to be a responsible news magazine. Can we call it post-mainstream.

as you and i have already discussed on twitter (but restated for comments discussion), i'm not certain about "trolls" being *by definition* a) outside the mainstream, and b) people (or publications) to ignore. i've always understood trolls to be such because of their behavior, eg they are people (or publications) engaged in trolling: posting/printing/saying deliberately offensive and provocative things for the purpose of derailing conversation, causing general disruption, provoking emotional outbursts in others, and/or drawing attention to themselves.

i agree that the best procedure for dealing with *most* trolls (random individuals on fringe-edges of a group, for instance, or fringe publications with small audiences) is to ignore them, and i absolutely agree that a publication with as much (regrettable) influence as Newsweek needs to be held accountable for the stories and images it circulates. but let's call trolling "trolling" when we see it (which i think you have here, in correctly pointing out that Newsweek is 'acting like' a troll), or--if we can't agree that "trolls" can be either in the mainstream or on the fringe--then let's come up with a term specifically for "engaging in trolling or other troll-like behavior from a position of power and influence."

as a bonus, if we can say that Newsweek is engaged in trolling, then we can talk about spamming their #muslimrage hashtag as "fighting trolling with trolling." because you have to admit: by disrupting the conversation Newsweek intended on the hashtag they created, we fringe news consumers became the meta-trolls by trolling their trolling...which i think is pretty awesome.

Tina Brown has been a blight on American journalism for at least a couple of decades now. Her own success has always been much higher on her priority list than any standard of responsibility. So her desperation now isn't surprising, but it is nonetheless disgusting to watch. I think Nathan's piece identifies an important and tricky dilemma. Important because I totally agree we have a responsibility to call the Newsweeks of the world out on their shit, tricky because there's only so much time in the day. I guess the point is you have to pick your battles.

[...] In light of the recent Newsweek magazine cover scandal, let’s think for a moment on what a “troll” is and when we should or should not call someone or something a troll. My first reaction to the Islamaphobic cover was “trolling.  [...]

[...] on this blog. Perhaps I shouldn’t feed the troll, and n+1 is certainly acting trollish here, but, as I’ve argued before, I don’t think outlets with influence can troll or derail a conversation because they set the [...]