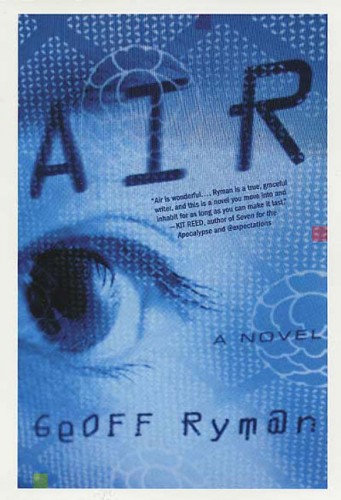 Is technology – especially communications technology – a necessary component of contemporary fiction? This is the question posed by Allison Gibson in an excellent piece posted earlier this week; it shouldn’t really surprise most people that she comes down on the side of “yes”, but the question – and its implications – are worth some more serious consideration. Especially when one considers setting, or (I don’t love the term but it has a certain utility) “genre”.

The ubiquity of communications technology and social media would seem to make its inclusion in contemporary fiction a no-brainer, writes Gibson, but with ubiquity comes an element of the mundane. There are all kinds of tasks that people perform as a matter of course in everyday life that nevertheless aren’t included in your average narrative, partly for reasons of brevity, but also – and this is the crucial point – because they don’t do anything to progress the story, and when you’re writing fiction, pretty much anything that doesn’t do that singular job in some capacity probably shouldn’t be there. The thing about communications technology is that it’s about communication – like the fortuitous arrival of a letter or a mysterious telephone call, an email or text message between characters serves a specific narrative function, whether that function is to reveal important information about the characters themselves or to introduce something that will move the plot along. “Think of it this way,” writes Gibson, “in most cases, a bowel movement will not move the plot forward; an email will.”

Additionally, as many writers have observed, convincing storytelling is fundamentally about telling the truth – not in the sense of relaying a factual account of a series of events but in constructing a world and populating it with characters that behave in ways that your reader will find convincing. Good storytelling is breathing reality into the unreal; a false note breaks the spell, because it fills an attentive reader with the inescapable feeling that what they are reading is, on some level, unbelievable. A contemporary story without any reference to technology is probably going to feel that way. A character shouldn’t be ignorant of crucial information that could be easily obtained through a Google search unless there’s a good reason for her to have neglected to Google it. Two characters separated and trying to work out logistics should be able to communicate via cell phone unless one of them has lost theirs or forgotten to charge it. These are tiny mundanities, but their absence would be conspicuous.

Their absence – or their misuse. I think we can all call to mind instances in movies and TV shows where the internet makes an appearance in such a way that you wonder if the scriptwriter has actually ever used the internet at all, or just means to  eventually check out that information superhighway that all the kids are talking about. 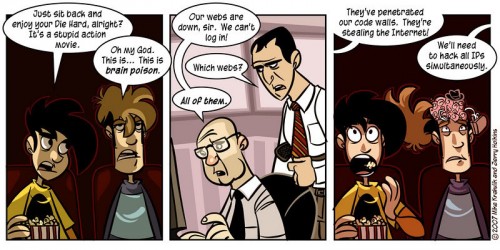 Writing technology into contemporary fiction, Gibson notes, introduces its own set of unique issues: how central to make the tech? How much do you refer to it? What is it actually there to do, if it’s more than to add depth or realism to worldbuilding? And what do you do when the tech you’re writing about is out of date by the time the book comes out (I think a lot of people outside of the publishing industry may not know how long it takes to get a book published. It can take years. And that’s after you sign contracts.)?

One example of a book series that is laughably, insanely bad at this is the Evangelical apocalyptic Left Behind by Tim LaHaye and Jerry Jenkins (which is being wonderfully and ongoingly deconstructed over at The Slacktivist). The series was started before the age of cell phones but continued throughout their spread, and is supposedly set in the near future – and there is nary a cell phone to be found in most of its scenes, despite the fact that characters spend mind-numbing amounts of time on the phone addressing relatively bland things in very bland ways. LaHaye and Jenkins actually present a great example of how overreliance on technology to move the plot along creates major storytelling problems; a few crucial phone calls help bridge gaps between scenes and events and tie things together as well as move them forward, but scene after scene of endless phone conversations quickly becomes tedious in the extreme. And the fact that the technology is badly dated only calls attention to this.

If nothing else, the technology problems in Left Behind illuminate a slightly different problem than your technology going out of date by the time of release: how exactly do you play techno-futurist when writing in the near future? Or the far future? Every science fiction writer pretty much ever has had to either grapple with this problem or choose to ignore it (guess which tends to produce better SF) but SF writers are usually inherently dealing with technology in a different way than their contemporary fiction brethren. When we write SF, often we’re explicitly writing about technology, or at least about the effects that technology has on people and their lives. One is therefore extrapolating forward based on very incomplete data, and often one gets things wrong – many people in the early 20th century predicted that we’d have flying cars and moon bases by now but almost no one conceived of anything like the internet. Some writers have gotten things very close to right, in terms of feelings and concepts if not in the details of the technology itself – William Gibson and Geoff Ryman are two names that spring immediately to my mind.

Science fiction writer Larry Niven has laid out some guidelines for what writers should pay attention to if they want to make informed guesses about future tech – and ultimately these guidelines have far more to do with the enduring qualities of people than with technology itself:

So even if SF writers are free to invent and speculate and not be held especially accountable for guessing wrong, one can still make guesses that feel more true than not. We live in a world where documentation and communication are both massively prevalent and that’s reflected in our technology; present me a future world where that isn’t true and I’ll need you to give me some good reasons why not. Likewise, general trends seem to be moving in the direction of technology becoming ever-smaller and more portable; mobility appears to be a crucial element for most things. Anyone writing about the near or even the far future of human society is going to have to address that on some level. Increasingly the devices we use are linked and the information we store on them is accessible from a number of points; this all means something in terms of how we move through and interact with each other and the world. It’s small, in many cases it’s mundane, but it’s these things that create a world that feels real to us. Neglect it at your peril.

I ran into this myself when working on the worldbuilding for my forthcoming book Line and Orbit, which is set in the distant future and works with – really, relies on – a number of common space opera tropes. As such, my coauthor and I weren’t hugely concerned with exacting scientific accuracy or highly realistic speculations about technology, but in one particular scene, I did have to deal with the idea of cell phones. What the hell would they look like? How would they work? How would they resemble what we have now, and how might they be different? In the end I went with an implant in the brain itself, but it felt incomplete and possibly not as richly imagined as it might have.

Also, what happens to the internet once humanity is spread across multiple worlds? That’s a question I never really dealt with at all, but I think it’s an interesting one.

Regardless, as I indicated earlier, this is where I feel that SF particularly shines, and why I think that it still allows us to tell powerful, important stories: more than contemporary fiction, it allows us to perform thought experiments with technology and society – and with technology and individuals. It’s really more than guessing; at its best it’s highly theory-driven imagining. What if a version of the internet that exists inside people’s brains came to a remote village in Asia? (Geoff Ryman – Air) What if interfacing with computer networks was a profoundly physical experience? (William Gibson – The Sprawl Trilogy) What does an AI growing inside a human mind think and feel? (Catherynne M. Valente – Silently and Very Fast) What happens to digital news media if current trends continue unchanged? (Paolo Bacigalupi – “The Gambler”)

And then there’s steampunk, which – at its best – attempts to reimagine past technologies with expanded forms and functions.

Ultimately human storytelling of any kind is going to have to grapple with human experience. Technology is a necessary part of that experience, in the past, present, and almost certainly in the future. Storytellers of any stripe shouldn’t shy away from that. When done well, the products are remarkable and true, and one can’t ask for much more from one’s stories.

Sarah Wanenchak writes and lives SFnally under another name that shouldn’t be too hard to track down if you try. Incidentally, Line and Orbit will be released by Samhain Publishing in late 2012/early 2013.

[...] Is technology – especially communications technology – a necessary component of contemporary fiction? This is the question posed by Allison Gibson in an excellent piece posted earlier this week; it shouldn’t really surprise most people that she comes down on the side of “yes”, but the question – and its implications – are worth some more serious consideration. Especially when one considers setting, or (I don’t love the term but it has a certain utility) “genre”.  [...]

[...] Wanenchak on writing about technology in science fiction – though much of this could apply to contemporary fiction as well. Also check out  Allison K [...]

[...] let me point you toward a post my alter ego has done over at Cyborgology on writing about technology in both SF and contemporary fiction. Normally I don’t cross the streams, but this seemed [...]

Ooh, interesting. I'm not sure how relevant it is -- other than as an illustration of the problems inherent in the rapid pace of technological change and how that reflects into fiction -- but what this mostly made me think of is how Diane Duane has just reissued 'millenial' editions of her So You Want to be a Wizard books, to -among other goals- update them into a world which actually has cellphones/etc, as the originals were starting to feel distinctly aged in that regard. I haven't had a chance to check them out yet to see how much it changes the feel of the books to bring them forward in time, but it's interesting to see authors being aware of this issue not just at the time of writing but after the fact, too.