Against The Minority Report Computer 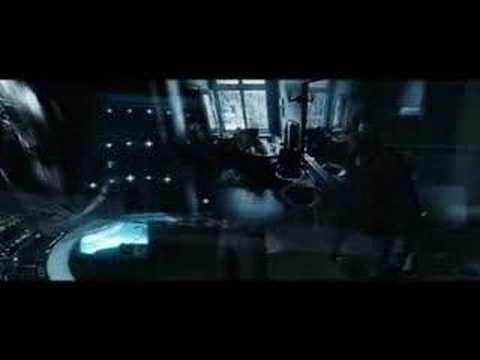 Who decided the Minority Report computer was the goal of 21st century interfaces? Why does anyone think its a good idea? Could you imagine doing a spreadsheet on that thing? And why the hell are they using physical media to transport information? What is so alluring, exactly, about this gigantic computer that requires two (two!) Nintendo Powergloves to operate and can only receive data (apparently) through physical media drives the size of VHS tapes? The resolution looks awful and, since the screens are transparent, I can only assume your computer always has to be up against a blank wall. But none of those things are nearly as important as the human element it ignores. The computer has no soul. Its a sterile interface meant to catch murders (or frame people as such), not share family photos. The obsession with the Minority Report computer is a betrayal of everything that is human about computers.

Frankly,  I’d rather have Kevin Smith’s setup in Live Free or Die Hard. It looks comfortable: a place where I wouldn’t mind sitting down and reading Reddit in between emails. I cannot imagine blogging on the Minority Report computer, but with Kevin Smith’s basement command center, I would write volumes. Speaking of Reddit- consider /r/battlestations; the community of avid computer users that share pictures of their desk setups. A few weeks back I submitted my somewhat modest “battlestation” and was surprised by the enthusiastic response:

Most submissions are called “battlestations” but the more creative titles are very telling. The “she cave” above is one example. Others include, “Hermit Crablestation“, “My Sanctuary“, and “This is my haven.” The easy conclusion to make here is that the love these people have for their computers, borders on the pathological. These are inanimate objects that are no more deserving of love and affection as a toaster oven or a socket wrench. But unlike a toaster oven or socket wrench, these battlestations are places where friends and family keep in touch, where victories are won and lives are saved. They are sites of creativity and much-needed escapism. These spaces aren’t always small or modest but they are all personal.

I suppose the Minority Report computer could be someone’s future sanctuary. Samsung, at this year’s CES, demoed a “Transparent Smart Window” (an opaque window would be dumb, wouldn’t it?) that is meant to sit in a kitchen window and act as a 42-inch media center. I suppose this, connected to a hacked Kinect controller, would be a big step toward the Minority Report Computer. I can certainly see the benefit of using gestures to control a computer while I knead bread dough or wash the dishes, but never as part of my hermit crablestation sanctuary haven. Its too far away, too sterile. I want something with the contours of a typewriter, not a television.

When I say the Minority Report Computer betrays everything human about computers, I’m talking about that tacit relationship you have with your workstation. That special angle you tilt your screen, the perfect wear of the keyboard, the improvised iPad stand. This sort of material relationship is still possible with the Tom Cruise 5000, but it certainly does not seem to invite it. You’re not supposed to touch the computer -unless you are inserting the over-sized physical media into it- and it has to be enormous. I say this only because I can’t imagine making those huge hand gestures on an iPad-sized screen. I don’t hate the Minority Report Computer, I just hate what it makes designers value: the big, the detached, and the sterile. I want a future with computers that make havens and sanctuaries, not movie theaters.

The case I’m making here is obviously a polemical one. Not just because it is controversial, but because its solely based on my personal opinion. I think technology that you touch and feel are better than ones that you gesture and wave at. I think the space between a person and a typewriter is better than the space between a television and its viewer. The intimate desk spaces I see in /r/battlestations contradict the very title of the community. These don’t feel like battlestations, they feel like home.

I re-watched Minority Report recently because of this:
http://www.theverge.com/2012/6/26/3118592/leap-motion-gesture-controls

and thought it was a pretty hilarious comparison.

I'm with you that what's imagined in the movie would be stupid (giant transparent discs!), but don't forget - there's the guy on the side with the keyboard searching a database, too. I don't think anyone's going to take that away from you anytime soon. People looove their keyboards. But look at all the gestures we know now for touch interfaces. I'm definitely loving those. They just augment the experience. I move around via touch and then settle into the keyboard when I need to type. Within a year or two, you'll have the option to gesture in the air (sans gloves!) when you realize you want to skip a song from across the room or mock-up a front-end real quick and that's going to be awesome and intimate. As long as the visual feedback is instant and realistic enough, I think your brain will fill in the tactile element just fine. That's the path Apple's been leading us down with the touch stuff, no? Or did you freak out when they took the buttons off trackpads, too?

[...] website required a browser plug-in to be the least-bit useable. I have since come to love my adopted home, but it will always be adopted. My Digg.com account is one of the oldest accounts I own and I [...]

[...] Who decided the Minority Report computer was the goal of 21st century interfaces? Why does anyone think its a good idea? Could you imagine doing a spreadsheet on that thing? And why the hell are they using physical media to transport information? What is so alluring, exactly, about this gigantic computer that requires two (two!) Nintendo Powergloves to operate and can only receive data (apparently) through physical media drives the size of VHS tapes?  [...]