When Our Things Abandon Us

This post essentially serves as an addendum to last week’s piece on abandoned digital space, where I introduced an idea — or rather an image — but didn’t really give it the attention it deserves, given some of the things it suggests about our capacity for imagining the world without us and why exactly we find such images viscerally disturbing.

Last week I noted that when we imagine a world that we’ve abandoned, we almost always also imagine it ruined, for both practical and psychological reasons. Post-apocalypse is an ancient theme in stories and art, though it’s arguably come into a new kind of prominence since the beginning of the 20th century, and the images of a ruined world that this line of imaginative narrative has produced can be extremely striking. They can also be disturbing, given what they invite us to do: to mentally time-travel, to jump forward into the context of possible — and possibly vague — cataclysm and a world in which we are absent. But I would argue that a direct fear of future catastrophe is less disturbing to us than the more existential prospect of our own present as a forgotten and discarded thing. As Will Viney writes:

In the comparative exercise of managing the disrupted continuity of the future ruin, between imaginary times and familiar places, we encounter not only a future in itself but also a future in which the present has been abandoned, cut off, terminated or forsaken.

It’s worth noting, then, that there is something defiant about our images of post-apocalyptic ruined cities; they tend to have a darkly majestic flair in spite of — or perhaps even because of — the devastation they display.

This dark majesty, our deeply ingrained cultural connotations of ruined empires, and the implicit idea that someone might be there to look at the ruins and remember — all of these things arguably serve as a kind of comfort to us when we imagine the death of our own civilization and, by extension, the death of ourselves. We all want to leave something behind, but we want that something to miss us.

Which is why Parisian artists Lucie and Simon’s Silent World project is so particularly unsettling. 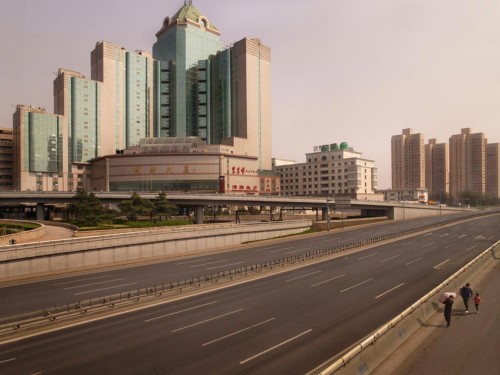 Using special filters and especially long exposures, Lucie and Simon have created digitally edited images of usually crowded spaces around the world, with most or all of the people in the image removed. The result is intensely unusual in post-apocalyptic imagery: A world largely devoid of people, but still full of structures. We are almost entirely gone, but nothing is ruined. What remains are lovely, quiet, empty spaces — built by humanity but divorced from it by humanity’s absence. This is arguably an even deeper level of abandonment than that usually displayed by post-apocalyptic imagery and other images of ruins — because it works both ways. 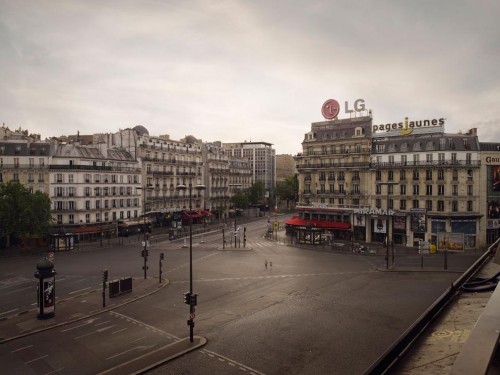 This is entirely unrealistic, of course, but our imaginations have the luxury of not needing to trade in realism, and our emotions are the same. In a world distinguished by our excessive construction, production, and consumption of everything, these are images that invite us to consider a world in which our relationship with our stuff is completely severed.

One of the most unsettling things about these images — at least to me — is the fact that without any hint of ruin, there’s nothing telling about this imagined future. There’s no indication of what might be reasonably expected to have happened to remove human presence. Many post-apocalyptic images and stories purposefully leave the cause of the disaster ambiguous (Cormac McCarthy’s The Road is an especially interesting example of this) but by contemplating the devastation we can at least hazard some guesses. Even a plague leaves its mark. But Lucie and Simon’s apocalypse is clean, tidy, and total. 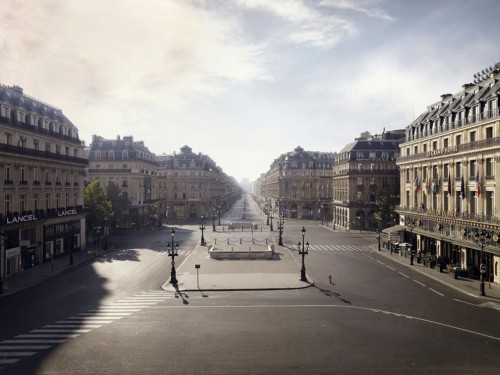 We’re just gone. And not even the things we leave behind seem to miss us.

And of course these photos recall those of Atget, both in method and imagery.

For me these images recall the affect of Lebbeus Woods in The New City: http://artect.net/?p=376. Woods is a most avant garde of architects.