No Exit: Technological Autonomy in Japan 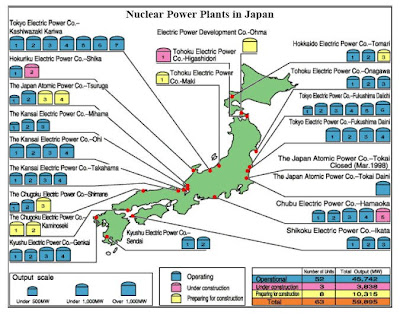 In January I wrote an essay for Cyborgology on the subject of technological autonomy and its implications for the environment. There’s no more important dynamic when it comes to understanding our relationship with machines and where they’re taking us.

Technological autonomy is shorthand for the idea that, once advanced technologies pass a certain stage of development, we lose our ability to control them. I generally use the phrase “de facto technological autonomy” to underscore that what’s being talked about is a loss of practical rather than literal control. Loss of practical control occurs for a number of reasons, among them the fact that the economies of modern societies have come to depend, completely, on various technologies. Remove those technologies and the economies collapse.

A striking example of this is the dilemma facing Japan as it contemplates whether to resume its dependence on nuclear energy in the wake of the post-tsunami meltdowns at the Fukushima Daiichi reactors last year.

Since the meltdowns, operations at all the nation’s 54 nuclear reactors have been gradually suspended. Public concern has kept the plants offline despite increasingly strident warnings from officials there that without them the nation faces (as one publication put it) an “energy death spiral.” The threat is that without power sufficient to supply its manufacturing needs, Japan’s largest employers will be forced to abandon domestic production, initiating a process of “deindustrialization” that would cripple the economy. These concerns are exacerbated by uncertainties regarding international oil supplies and the prognosis that this coming summer may be unusually hot, prompting a spike in energy demands.

The dilemma is an excruciating one. The nation’s citizens are essentially being told that they must welcome back into their midst an industry that’s made whole towns uninhabitable and that’s undermined confidence in their food supply, not to mention their officials. The alternative is widespread unemployment and poverty. In other words, while it’s literally possible to shut down the reactors permanently, practically speaking Japan may have no choice but to turn them back on. That’s de facto technological autonomy.

Global warming doubles the bind. Without the reactors, Japan will make up some of its energy deficit with fossil fuels, thereby increasing its emissions of greenhouse gases.

Japan’s distinction is that the tsunami has forced it to confront the issue of technological autonomy sooner than other industrialized countries. Their time (our time) will come.

[...] couple of weeks ago I posted an entry on technological autonomy. It made the point that a nation’s commitment to advanced [...]

[...] while we can literally turn off our machines, practically we are unable to do so. The people of Japan have learned a lot about technological autonomy since the tsunami hit the Fukushima reactors. [...]