What the ASA 2011 Bingo Card Tells Us About the Conference

Yes, I know it is just a game and it is fun and it is not something to get all blog-ranty about. But, sorry, we’re (mostly) sociologists and we learned long ago the importance of the mundane (R.I.P. Garfinkel this year, by the way). The number of “retweets” this card receives makes it something worth discussing. We made our sociological bed, so let me sleep in it for a second. 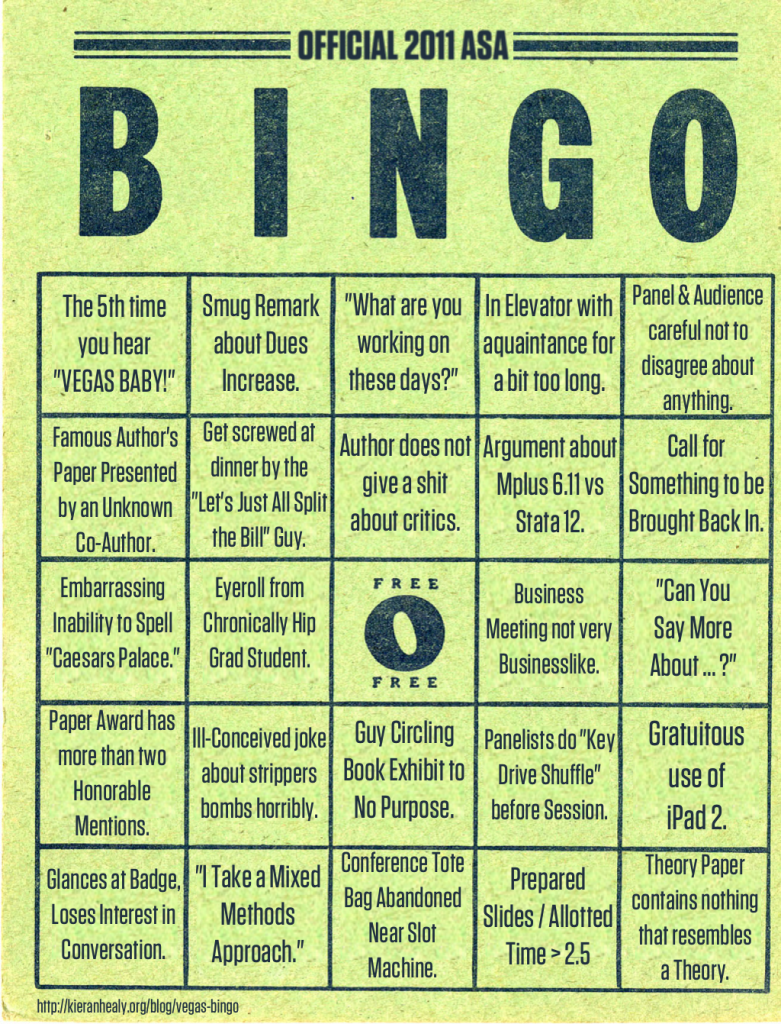 We’ll notice that the popular bingo card, created by Kieran Healy, is pretty negative. This does not mean that Healy or those who get a kick out of this dislike the conference. Instead, it provides a lighthearted way of expressing our frustrations with the event. Such as:

These last three points speak directly to the frustration that the goals we have for conferences are often not met. We are here in Vegas partly to learn from each other and improve our own ideas, yet so many (though, not all) of the sessions lack good dialogue. When a person presents to five bored attendees checking their email, nothing is achieved. And this needs to change.

Thus, the card serves as a good list of important problems with the ASA meetings that should be addressed (understanding that many of the issues are simply inevitabilities. Which reminds me: why no mention of Wi-Fi?).

That said, I would love to see a more positive ASA Bingo Card. One that lists the reasons why we are here and what we can gain from this experience. What positives can we get out of this meeting? Perhaps a card like this could help people make the best use of their time spent at meetings like this. Or perhaps I typed too many words (“smugly”, on an iPad) about something as silly as a bingo card.

Perhaps you should take it upon yourself to create a more "positive" bingo card. I tried like hell but couldn't get past "buying sex legally," "shooting craps," "riding the mechanical bull at the Double Down" (saloon far enough away for most conference attendees to patronize), "drinking all day and night," "hosting live donkeys in my free suite upgrade," "shooting fireworks off the top of Paris Paris," and mainlining the local smack (black tar)". But you seem to be a much more serious sociologist than I, so I'm guessing you'll come up with a happier and more wholesome, if not austere, Bingo card in no time flat. All in good fun .... Raising my glass to subsidized vacations in the name of "sociological busy-ness" ...........

[...] revealed much about the sociological discipline and the problems with the annual meetings. He wrote a post here on Cyborgology calling for a more positive bingo card that might be helpful to improve the [...]

[...] I do think that the “chronically hip grad student” square was not just, as Nathan Jurgenson asserted, a mainstream culture-embedded dig at hipsters, but also an indication of a general discomfort [...]

"I take a mixed methods approach":) Guess we do that all the time!

[…] a lot about conferences (here, here, and here) as have fellow cyborgologists (Sarah, Nathan, and PJ). All of these posts have a common thread: academia is changing, but conferences seem […]