Alternate Realities in the Developing World

The original work described in this post was done in collaboration with Audrey Bennett and Ron Eglash and funded by the National Science Foundation’s GK-12 grant-funded Triple Helix Program. You can read all of the dispatches from Ghana on the3Helix fellows’ blog.

Alternate universes can be a lot of fun. We can make Superman land in the USSR, put goatees on normally clean-shaven cast members, and revisit moments in history and play the “what if” game. It is the stuff of science fiction and fantasy. But there is much more to be said about the various parallel universes that might exist. At least, that’s what a lot of social theory has us believe.

At the end of the 20th century social scientists released dozens of books and articles with the words “social construction” in the title. Social constructionism became a very useful tool for the post-modern author who wanted to deconstruct such difficult topics as organic chemistry or high-energy physics.  Their premises were rather straightforward and were unceremoniously summarized and simplified by Ian Hacking in his book “The Social Construction of What?” (2000). Hacking writes:

“Social Constructionists about X hold that:

Hacking, as a philosopher of science, was concerned about the liberal use of the term “social construction” and wanted to know what exactly it was that we were all so busy “constructing.” Why would we talk about the social construction of institutions when, as any Sociology 101 class would teach us, institutions are social entities that cannot be explained without their social components. You might as well talk about the brick construction of brick homes.  The more interesting moments of social constructionism (according to Hacking, and I agree) are those things that are not recognized as such. Such social construction theses have changed the world. One of the most notable and well-known theses is from Simone de Beauvoir’s The Second Sex, in which she proclaims, “One is not born, but rather becomes a woman.” In this brief sentence, she rejects the assumption that when one’s biology (sex) determines their role in society (gender).  It was a simple distinction that was crucial in the launching of the feminist movement.

In the late seventies sociologists, historians, and anthropologists began studying such “unsocial” topics as laboratories and scientists. These authors, by the late 80s, had formed a well-defined school of thought titled “Social Construction of Technology” or SCOT. Everything from the stove, to the bicycle, to the interstate highway system were shown to be just one of countless other possible technical arrangements.

Social entitles such as Victorian family structures, notions of masculinity and femininity, and class distinctions were crucial in the creation of present-day ovens, bicycles, and highways (respectively). All of them show a way things could have been, but are not. Their current forms are not, as Hacking would say, inevitable. It is my contention however, that we need not limit this perspective to historical accounts of invention and innovation. There are alternate innovation timelines happening all around us, especially in developing nations.

These alternate innovation timelines are the result of different people getting access to different services and technologies, at different times. Most of us may consider a smart phone to be an extravagance that we could do without. It is a luxury item that offers entertainment and functionality that, while extremely useful in our hectic lives, is not as necessary as our transportation to work or the electricity that does work around the house. Smartphones are things that you get once you can afford them, and not before more basic necessities have been filled. If you do not have a smartphone, you access social networking sites through a computer at home, work., and/or school. Those that have a smartphone, probably use it in tandem with a full computer. But when one looks at the role cell phones play in the lives of low-income communities and developing nations, we see a different picture. The cell phone is not a luxury item, it is a communication tool that helps individuals pool resources, overcome obstacles, and gather information that would otherwise be unobtainable.

Mobile penetration has increased 100 fold since the year 2000, in almost all African nations (read the full report by Kas Kalba for the precipitating factors [PDF]) and the usage patterns of these phones differ considerably from those in developed nations. Cell phones are plentiful, almost always pre-paid, are shared with others, and specialized for specific tasks.

While in Ghana, we conducted about two-dozen interviews. Of my twenty-two interviews, half had smartphones and half had keypad only phones. (I considered anything with a full keyboard or a touchscreen, a smartphone.) Four interviewees had two cell phones that they used for specific purposes (one for calls and texts and the other for internet browsing). Three of those four had two smartphones and the other one had two keypad phones.  Facebook is experienced, by and large, over the phone in a mobile format.

In their keynote at the 2011 World Wide Developer’s Conference, Apple’s Steve Jobs noted that half of iPhone users never connect their device to a computer after the initial setup. Tech blogs hailed the beginning of the “post-pc” age, in which the work of full PCs has moved to a variety of handheld devices. But in reality, this is unique to the West and parts of Asia. The developing world never had a “PC era” and is not “post” anything. The cell phone was most individuals’ first connection to the Internet and social networking. Using Facebook was partially synonymous with the self-reported act of “browsing” but was not considered part of “the internet.”

While cell phone use in Ghana looks similar, people relate to the various technologies surrounding it, in a much different way. We don’t need to bother with SCOT’s historical “what if’s.” We can look at the present-day differences of cell phone adoption in developing countries and see what has developed. Smartphones are used frequently by people from varying walks of life and shape their definitions of where the Internet begins, and Facebook ends. Most importantly however, it means any work that uses IT in the developing world, must take into consideration the unique history of that technology’s adoption.

[Edit 23:04EST]- I just remembered a picture that sums up how successful cell phone companies have been in Ghana. This was taken in the lobby just outside of the international arrivals terminal at the Accra Airport: 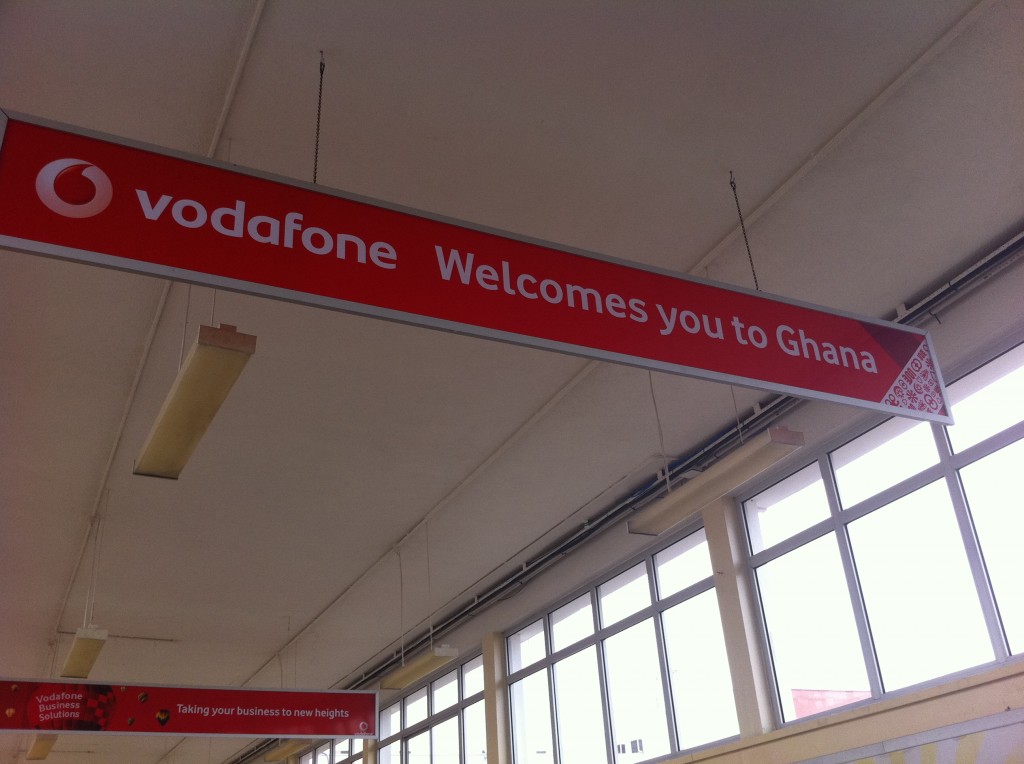 "The cell phone is not a luxury item, it is a communication tool that helps individuals pool resources, overcome obstacles, and gather information that would otherwise be unobtainable."

What an interesting and nuanced point, that luxuries in prosperous nations can be necessities in the developing world. It really makes you re-think "digital divide."