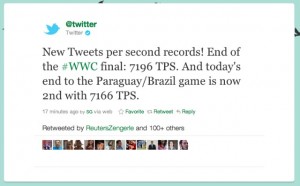 Twitter users set two new records for tweets per second on Sunday during the FIFA Women’s World Cup. The top spot goes to the championship game between USA and Japan, with 7,196 tweets per second at the end of the match. The Paraguay vs. Brazil game takes the number-two spot with 7,166 tweets per second. Putting this in context, this surpasses both the super bowl (4,063 tweets per second) and the 2010 Men’s World Cup final (3,283 tweets per second). If soccer is the world’s game, we see here a global community, where physically and geographically dispersed people come to share in a conversation. Moreover, we see the increasing integration of new technologies as an integral part of social experience, as tweets about the game became part of the event itself, and the event, by setting a new tweets/second record, became part of technological history.

I am not sure what the right words are for a 7,000 utterance per second twitter stream, but I don't think "conversation" or "community" fit. Those words imply some awareness of who the other people in the conversation/community are, and here there is no such awareness.

To me, the interesting development is that Twitter, by becoming part of the event (as you point out) is beginning to reinforce the very things that the Internet was supposed to break down, like mass-audience prime-time appointment TV.