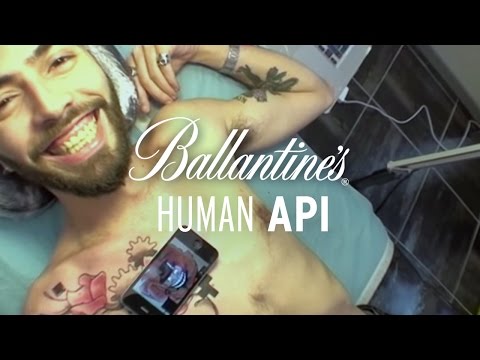 I already wrote on augmented reality tattoos once before, so I will keep it brief. This video shows a client receiving a QR code tattoo, which then links to Youtube and plays a little cartoon of a singing man. Now, although the artist is off in proclaiming it as the “first ever” of its kind, it once again highlights a growing trend in the body modification community. Not only does the fusing of technology and the body create unique cyborg bodies, it also reveals the importance of such new technologies for the expression of our selves and identities. For instance, will people begin tattooing QR codes on themselves that link to their personal blogs and Facebook accounts? This would make a very interesting case of self-branding!

Another trend I have observed in my own research on tattooing is the role of the prosumer. This video shows the tattoo artist K.A.R.L. livestreaming his tattoo appointment online, communicating with observers in a chatroom format while tattooing his client. Now this is nothing new. In fact, some of my close friends have been doing this for years and I myself have been tattooed in front of an internet audience several times. But what makes this example interesting is the fact that the internet audience, as a body of prosumers, helped K.A.R.L. determine the tattoo design itself. This is unheard of. I have yet to see tattooers take such a “crowd-sourcing” approach to their work.

But this video does speak to the importance of Web 2.0 to contemporary tattoo fame. In a media-saturated environment, tattoo artists now must aggressively market themselves online through SNS like Facebook and Myspace, and through livestreaming tattoo events like this. At a time when tattoo collecting itself has become globalized (Irwin 2003), tattoo artists can no longer afford to become a “big fish in a small pond” as one tattoo artist told me. In order to survive in an increasingly media-saturated community, tattoo artists themselves must become hypervisible online, showcasing their work across several online avenues and building a client pool that spans several continents. Such is the nature of contemporary elite tattooing (Irwin 2003).

QR Codes and Self-Branding in the Digital Era » Cyborgology — January 13, 2012

[...] In an earlier post I posed the question as to whether or not QR code tattoos may emerge as a form of self branding. That is, will individuals begin tattooing QR codes onto their bodies rather than the standard Kanji symbols representing standard tropes of love, strength, and honor? It seems that QR codes would serve as a powerful symbolic identifier, one that is uniquely individualistic (there is no threat of “misreading” the tattoo when it links directly to one’s Facebook or MySpace account) and lends itself to personal branding: The corporeal self linked directly to the digital self. [...]

This is very cool. I'm curious how you create a random QR code. Is it a simple redirect? So if the site ever goes down the tattoo no longer works? Or is in more complicated than that?