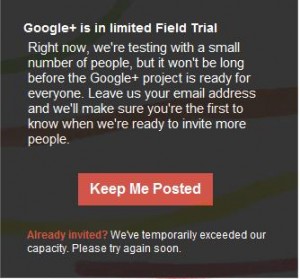 I should start this post by admitting that I was not one of the lucky recipients of a Google+ invitation. My request was met with a polite declination and an opportunity to get in line with the other latecomers. Rejection. As a consolation, I scrutinized the Google+ homepage, clicking on anything that seemed to have a link.

Unsurprisingly, the homepage prominently advertises that this new platform will more “accurately” represents users’ actual social relationships (Nathan talks about this preliminarily in a recent post). In particular, Google+ includes a feature which allows users to keep their networks segmented. This is the feature that promises to remedy the dilemma of context collapse—the meeting of previously segmented networks in a shared social space—that plagues social network site users. 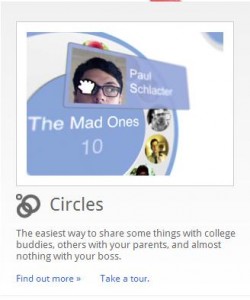 My presentation at the Theorizing the Web conference focused on the ways in which users of social media (and Facebook in particular) manage the problem of context collapse. As a very brief summary, I delineated a number of techniques through which Facebook users maintain a sense of privacy and effectively re-segment their networks within an architecture and structure that promote openness and facilitate sharing. I concluded with a point about human agency within the structures and architectures of technologies.

The agency of humans, as they interact with, as, and within technologies, is driven home by the network-segmenting feature of Google+. Engagement with the internet is necessarily a multi-sited endeavor, and so the agency that we practice within one space will inevitably transfer, in some form, to other physical and digital spaces. As such, Facebook users’ agency seems to have spilled over into a new platform. Within this platform, Google+ users (supposedly) need not subvert the system to obtain the privacy and selectivity that they want. Instead, the structure of Google+ has Facebook users’ agency directly built in.

I have written previously about active and passive cyborgs, arguing that activity and passivity turn on intentionality. I argued that the active use of technologies can take two forms: we can actively use technologies exactly as intended for the purpose of maintaining the structure and meaning of these technologies, or we can actively use technologies in unintended ways, subverting the less desirable features. Extending this further, the Google+ example shows that our active use of technologies in unintended ways can lead not only to restructuring, but to new structures altogether. Such structures, created within a competitive market, therefore not only allow for, but embody, human agency.

This is not to say that Google+ is the technology, the platform, the place we will all want to meet, interact, and actively maintain. On the contrary, this new platform, like all technologies, will almost certainly fail to meet certain needs, whims, desires, of its users. The point is that the shortcomings of this technology, and all technologies, will be met with human action, leading to alterations in this and other structures. Our everyday lives are structured by the technologies with which we engage, and technologies are structured by the ways in which we use them. Lives and societies are therefore constructed through the collaborative efforts of humans and technologies.

Love the way you present this, that structures and agency interact, aided by a competitive market which responds to embody and overcome the conflict between them. A really elegant theory.

Wow, you just summarized this entire post in a single sentence. Right on!!