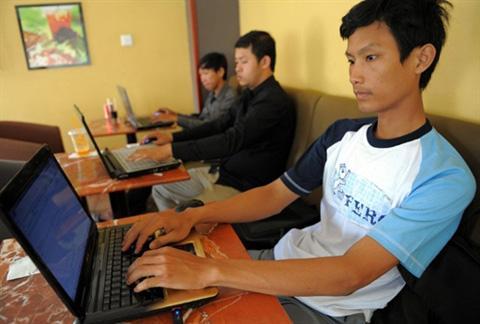 ok so i have a few complaints about the use of “augmented reality.” the first is primarily semantic. it seems (to me at least) like the term it implies some kind of (pre-digital?) “non-augmented” reality. this is more or less explicit when we refer to things like “augmented revolution” or “augmented conference.” it seems like the idea of augmented reality was introduced to make a point against a false binary (“digital dualism”) and i agree that this is important, both academically and in real life (see what i did there?). but i think the way we talk about augmented reality is sneaking a version of that binary back in. not the naive real v virtual but maybe something like real v “real+” and i think that is a mistake. and it is a strange mistake to read here, on a blog called “cyborgology” that proclaims (rightly i’m sure) that we have always been cyborgs. our friends from sst especially, i think, are sensitive to how reality has always been “augmented” if we are paying attention. so quoting sst hero latour:

If we wanted to project on a standard geographical map the connections established between a lecture hall and all the places that are acting in it at the same time, we would have to draw bushy arrows in order to include, for instance, the forest out of which the desk is coming, the management office in charge of classroom planning, the workshop that printed the schedule that has helped us find the room, the janitor that tends the place, and so on. And this would not be some idle exercise, since each of these faraway sites has, in some indispensable way, anticipated and preformatted this hall by transporting, through many different sorts of media, the mass of templates that have made it a suitable local—and that are still propping it up.*

and he goes on for literally pages. he starts on p 200 (where the quote is from) and ends somewhere on p 203. then he picks it up again on p 206 with more. by 207 he is talking about the “plug-ins”, “patches” and “applets” that actors in a lecture need to make sense of what is happening. and cyborgs:

As we have witnessed so many times throughout this book, information technologies allow us to trace the associations in a way that was impossible before. Not because they subvert the old concrete ‘humane’ society, turning us into formal cyborgs or ‘post human’ ghosts, but for exactly the opposite reason: they make visible what was before only present virtually. In earlier times, competence was a rather mysterious affair that remained hard to trace; for this reason, you had to order it, so to speak, in bulk. As soon as competence can be counted in bauds and bytes along modems and routers, as soon as it can be peeled back layer after layer, it opens itself to fieldwork.

so what has changed, latour argues, is not reality but rather our ability to trace reality. so i guess in that sense what i want us to start talking about now is an augmented sociology instead of an augmented reality, but that is maybe a topic for another time.

anyway, the other objection i have to augmented reality is in the way it is sometimes invoked here. because it is often employed as a kind of device against “digital dualism,” augmented reality is sometimes used to signal the “implosion” of offline and online worlds. again, i think this is true to an extent, but i think it goes a little too far. and again the particular mistake i think is being made is a strange one for me to find on this particular blog. i think nathan probably more than anyone else i’ve read is most articulate about the different logics that operate online and offline (or maybe it’s just that he articulates what i find to be the most interesting difference). specifically, i am referring here to his stuff about the difference between “the properties of atoms and bits” which appears in multiple places. these different properties produce/are conducive to (depending on how determinist we are feeling) different social logics.

ok so what? it seems to me that appreciating the ways in which online and offline worlds are increasingly enmeshed is quite different from the “online and offline are mutually constitutive” kind of feeling i often pick up when reading about augmented reality here. the former seems to me to be quite good and quite important. but often this first argument seems to be conflated with the second, which seems to almost abolish the difference, or at least make it difficult to talk about the difference. so in kind of the same way, cultural sociologists insist on an analytical distinction between “culture” and “structure” not because the two aren’t inextricably intertwined, but because they are, and to simply say that they are “mutually constitutive” robs us of the ability to identify and articulate the real processes by which one produces the other.

also (or relatedly), people in real life (again!) perceive the difference between offline and online, which is a pretty good indication that we should take that difference seriously as well. sometimes there really isn’t a “divide” at all – like when we want to contact a friend we can visit or email or text or call or whatever seems most appropriate, and email isn’t some bizarre extra limb that we have to remember to use. but other times people do imagine a divide, and in a sophisticated way. the best example i can think of here is from aimee morrison’s “hiding in the crowd” presentation at the conference on mommy bloggers. for them, the difference between online and offline was crucially important, and the way they navigated this “divide” was not at all naive. you couldn’t say that this was some kind of relic of an earlier time that might disappear as people get more comfortable with technology just like we all got used to sending email.

* this is from reassembling the social. highly recommended for basically everyone but especially sociologists. i think it is the “the sociological imagination” of our generation (which is to say, polemical and imperfect but super important).

sang is a sociology student at the university of hawaii at manoa.

I think you are tapping into a philosophical issue that is much broader than this debate alone. Post-Modernism has long struggled with the issue with the issue of two phenomena being both mutually constitutive and analytically distinct. Insofar as the concept of augmented reality claims that the organization of the physical and of the digital worlds are co-implicated, I think augmented reality is correctly identified as a post-Modern theory.

However, only the most radical post-Modern theorist would embrace the of total collapse of the boundaries between the physical and digital worlds; a more modest claim is simply that the two worlds are blurring. Just as, on the micro level, Haraway invoked the term "cyborg" to describe humans (an other species) inhabiting the technological, social, and biological divides, I use the term "augmented reality" as a macro-sociological device to capture the state in which conventional social structures now find themselves - as spanning the material and digital, the offline and online worlds.

To be even more precise, I believe that the online and offline worlds are formally necessary in determining one another. Yet, that is not to say that either is a sufficient cause in determining the nature of the other. In other words, we cannot make sense of one without the other, but we also cannot make sense of one by looking ONLY at the other. In this way the online and offline worlds are simultaneously distinct and mutually constituted.

As far as the digital divide is concerned, level of analysis is of paramount importance. On a micro level, we can discuss the extent to which certain actors engage with technology, becoming cyborgs to a lesser or greater degree. On a macro level, we can discuss the "non-optional systems" or social structures which are increasingly affected by the blurring of the digital and the material, and then consider the extent to which certain possibilities are opened or foreclosed to most individuals by this augmentation of reality.

I have responded to this in the form of a new post: http://thesocietypages.org/cyborgology/2011/04/29/defending-and-clarifying-the-term-augmented-reality/

I think there are two basic criticisms here, and I would bet we are all in basic agreement on both. However, Sang's criticism pushes further elaboration that was required from PJ and I, which is great. Thanks for the critique!

I know I haven't been around here as long, nor have the chops to speak authoritatively on any topic, but I thought I'd share my own thoughts on such an interesting topic.

For me Augmented Reality is not so much a description of a state of reality which, as everyone he pointed out, has been with us as long as culture and technology. Rather I see the term as describing an increasing conscioutization and intentional effort to take advantage of the fact that today's 'digital' and 'real' have imploded. Then Augmented Reality is not a description of what Is as a fact, but of what is Happening as a movement in the social ordering.

Although I would argue, perhaps somewhat radically, that no implosion has actually occured, since there has never been any real difference between the two terms which could be destroyed. I think of this 'digital dualism' as little more than a social nicety meant to preserve the illusion of the 'real' by ensuring that the 'digital' was seen as distinct. It is actually the 'real' which has become digitalized, and the 'digital' sphere as a supposedly distinct concept actually grew naturally out of that fact, as an extension of our digitalized reality.

Augmented Reality just means the increasingly widespread understanding of that fact, as well as a capitalization of it to further various systems in the actually unified Reality of a wholly digital world.

Anyway, there is my perhaps ignorant opinion. It was a pleasure to have the chance to formulate it!

[...] Sang-Hyoun Pahk delivered a critique of the usage of the term augmented reality on this blog. First, thank you, criticism of this term is especially important for me (and others) because [...]

[...] Yesterday, Sang-Hyoun Pahk delivered a critique of the usage of the term augmented reality on this blog. First, thank you, criticism of this term is especially important for me (and others) because augmented reality is the fundamental unit of analysis about which I seek to describe. A quick catch-up: I initially laid out the idea of augmented reality here; expounded on its opposite, what I call digital dualism, here; and fellow Cyborgology editor PJ takes on the terms here. PJ Rey and I use the term augmented reality on this blog to describe the digital and physical worlds not as separate but instead as highly enmeshed together. And Sang is pushing us to further elaborate on what this all means. [...]

[...] why I don’t like “augmented reality” by Sang-Hyoun Pahk » Cyborgology, April 27, 2011 A response to Jurgenson’s definitions of digital dualism and augmented reality. [...]