I wrote this for my personal blog, but thought it might be of interest here, seeing as this blog is partially about introducing new technology to people. Twitter, if you haven’t heard is a new “microblogging” service: you’re limited to 140 characters and the interface is designed to make posting and replying to others’ posts as simple as possible. I decided to try it out and here’s my response:

I’ve been using Twitter for a little over a week now. For a long time I was hesitant to sign up. While Twitter had lots of hype, the hype was all within a pretty narrow circle: sure, all the internet celebs on TWiT each week love Twitter, but they’re in the crowd using Twitter. Nobody I knew used Twitter and it seemed like the kind of thing that’s only useful if you know lots of people using it. But both the geek and the sociologist in me were interested in it, so when one friend signed up, I decided to give it a go.

My first response to Twitter, and I think the first response of many people, is “Why would anyone care what I’m doing minute to minute?” There’s definitely some vanity involved in Twittering, but not really that much more vanity than is involved in the human experience generally: Twitter is basically an extension of our capacity for gossip and our curiosity about others. We all gossip to some degree (some people think it’s even the key to our evolution as linguistic creatures), even if it’s the simple “So what’s new?” kind of catching up we do everyday with virtually everybody we see regularly.

And some people we love to gossip with, even if we’re not that close as friends, simply because they have a way of communicating the boring minutiae of everyday life in a particularly humorous or insightful way. These people make great Twitterers, and they’re fun to follow on Twitter whether you personally know them or even really care what they’re actually doing minute-by-minute.

Then of course, there’s celebrity gossip: even if you’re hopelessly out of touch with popular culture, you still can’t help but look at the tabloid headlines in the checkout aisle of the grocery store. It’s just fun to see what famous people are doing.

So basically Twitter encapsulates all of these features of gossip, only it’s public and it’s online. You use Twitter to keep up with what your friends are doing, you use it for the entertainment value of following Twitter Personalities, and it’s fun to follow well-known people with thousands of followers just because, well, thousands of other people are watching, too.

But really, I think knowing a lot of people on twitter personally (for the first type of gossip) is probably the key to sticking with it for the long haul. I don’t really know how long I’ll stick with it, though for now it’s mostly been a way for me resuscitate my blog (I use FeedWordPress to crosspost all my Tweets on my blog). I remember when I first started blogging, I was really into it for awhile and then I kind of ran out of steam. All the big long rants had been written and it kind of lost it’s charm, or at least I lost the sense of urgency needed to motivate me to actually write up the posts.

What Twitter does, however, is dramatically lower the barrier to posting, so it isn’t a big time investment to Twitter at all. In fact, if you take the time to think, “Hmmm, is this worth Tweeting about?,” then you’ve already spent more time on it than if you’d just Twittered it right away. Again, this has it’s downsides, as represented by this popular cartoon explanation by Huge MacLeod of why he quit Twitter: 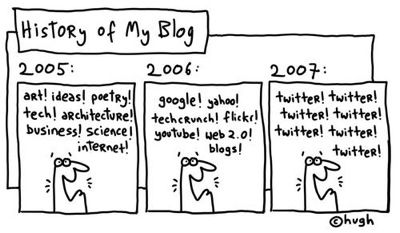 So I’m not sure how long I’ll use Twitter, but it’s very interesting and fun for now. Back to the vanity issue: yes, there’s clearly something weird about wanting to share your thoughts with anybody with internet access. However, let’s not kid ourselves: only a ultra tiny percentage of people writing on the web, period, whether it’s on a blog or twitter or whatever, actually has a lot of eyeballs looking at what they write. Anybody who really writes as if that’s the case is missing the point: you write for the handful of people you know. Or, less ambitious than that, you just write for yourself as if it were a personal diary, with the minor caveat that anyone can read it so you should probably show a little restraint.

But in comparison with a regular blog, this is where the beauty of the 140 character limit comes in. Unlike with a blog post like this one, where you invest hundreds or thousands of words in making some point, a tweet is only 140 characters. Who cares if it’s silly and insignificant. While it’s a fairly common experience to invest 20 minutes into reading a lengthy blog post and think, “Wow, that really wasn’t worth it,” your tweet has to be really bad before someone says, “Wow, that’s three seconds of my life I’ll never get back.” So Twitters’ appeal is all about a) making it so easy to post it’s often faster to post than to overthink it, and b) imposing a limitation (140 characters) that actually helps you by lowering the pressure to say something brilliant. It’s just a Tweet. Wait 5 seconds and refresh the Public Timeline and it’s already gone.

Is it a complete time-suck? It can be. I’ve probably wasted way more time than I needed to on it the last week on it (I hope my advisor doesn’t read this…), but a lot of that was because I’m kind of obsessive like that: I can’t just sign up for Twitter. I need to learn how to post from my cell phone, write a script to post from the command line (that I haven’t even used), find a Yahoo Pipe to remove replies from my Twitter RSS feed and then rework my blog to import that feed as posts and then display them correctly, explore lots of cool Twitter-related sites such as:

And, oh, yeah, write this long-winded blog post. I should probably stop now.