People are Not as Consistent in Their Social Ideologies as We Think: Changing Views on Gender and Race, 1977-2018 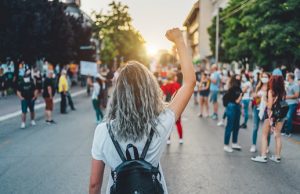 Young woman with a raised fist protesting in the street

As people come to oppose one type of inequality, are they more likely to also begin to oppose other types? To find out, we analyzed nationally representative data from the General Social Survey (1977 – 2018), documenting whether shifting gender attitudes over that period coincided with changing racial attitudes. In this brief report prepared for the Council on Contemporary Families we summarize the key findings of our forthcoming article in the American Sociological Review.

Racist and sexist attitudes were extremely widespread in the early 1970s. Two-thirds of Americans believed that women should devote themselves to homemaking and that they could only raise children successfully by foregoing paid employment. And among the White population, there was a widespread belief that disparities between Black people and White people resulted from individual deficiencies rather than discrimination, with only 40 percent attributing these disparities to discrimination.

Interestingly, however, these views changed at very different rates in the ensuing years. In 1977 only a third of Americans rejected the notion that wives should stay home while husbands worked for pay, but opposition rose steadily after that point. By 2018, three-quarters rebuffed that notion. By contrast, the percentage of Americans attributing inequalities between Black and White people to racial discrimination, as opposed to in-born racial differences, actually declined for several decades, reaching a low of 32 percent in 2004, substantially below the 40 percent figure of 1977. By 2012, however, some new patterns emerged.

We identified four configurations of racial and gender attitudes over this period. We measured racial attitudes with a set of survey questions designed to capture whether individuals felt racial inequality is due to structural factors like discrimination and unfair educational opportunities, or whether it is due to individuals’ deficient motivation. We inferred people’s views on gender by using questions that measured their opinion on whether women were as suited as men for politics and whether they thought women should primarily focus on raising families while men focused on their careers. We assigned people to one of four distinct groups describing their combination of beliefs about race and gender inequality. One group held universally progressive attitudes that supported gender equality in politics and in the home, while also attributing racial inequality to discrimination rather than individual deficiencies. Another group held universally conservative attitudes that endorsed conventional gender arrangements based on male breadwinning and female homemaking alongside beliefs that racial inequality was due to individual flaws. Two remaining groups held contradictory opinions. One held progressive gender attitudes but conservative racial attitudes. The other was the converse.

The bad news: For most of the past forty years, Americans’ growing understanding of gender inequality as a social problem was not matched by the same growth in their understanding of racial inequality. Although one might think recognizing inequality in one area would open people’s eyes to other inequalities, that did not happen for several decades. A very large proportion of people discarded their old prejudices about gender without shedding their prejudices about race.

Compared with people who endorsed conventional gender arrangements, people who supported women’s leadership and gender-equal divisions of household labor back in 1977 (27 percent of the population), were also quite likely to attribute racial inequality to discrimination. Of these gender egalitarians, 56 percent agreed that racial inequities were also due to discrimination and educational disparities. But as gender equality became more mainstream, the proportion of people recognizing gender inequality AND racial inequality fell. By 2004, the number of Americans supporting gender equality in politics and the home had grown to 62 percent, but only 38 percent of these gender egalitarians thought racial disparities were mainly due to discrimination, though of course the total numbers had increased. As of 2012, nearly three-fourths of survey respondents endorsed gender equality in public leadership and in the home, but six-out-of-ten gender egalitarians continued to blame racial inequality on personal flaws rather than discrimination. We refer to this combination of attitudes as New Racialism/Gender Egalitarianism.

These findings show how people can oppose inequality in one area of life but be blind to it in another.

The good news: From 2012 to 2018 there was a growing alignment of gender and racial attitudes. After 2012, the view that racial inequality is due to discrimination and educational access became increasingly common, especially among people who supported gender equality. From 2012 through 2018 the percentage of respondents supporting gender equality and also believing that racial inequality stems from discrimination and unequal access to education rose from less than 30 percent to almost half (47 percent). Starting in 2014, and especially since 2016, people who support gender equality have increasingly adopted more progressive racial attitudes, perhaps reflecting growing overlap between anti-racism and anti-sexism. In 2018, nearly 60 percent of gender egalitarians also identified discrimination and access to education as main sources of racial inequality.

The rebound in this combination of race and gender attitudes – which we call Racial Structuralism/Gender Egalitarianism – may reflect the influence of social movements such as Black Lives Matter. It seems likely that BLM and other social movements have had a substantial effect on individuals’ perceptions of racial discrimination, particularly among people who had already come to support gender equality.

Conclusion: When people reject one type of inequality, they do not automatically reject others. Over most of the period under review, people who adopted liberal perspectives on gender were slow to see the need for policies aimed at addressing structural racism. From 1996 to 2014, the most commonly held combination of gender and race attitudes was anti-sexist but not anti-racist. Yet since 2016 the proportion of Americans who support gender equality and also feel that racial inequality stems from structural factors like discrimination has risen to almost half. This coincides with the rise of contemporary social activism, such as the Black Lives Matter movement, that advocates for racial equity along with gender equity. It is very likely that the recent increase in anti-racist attitudes among people who hold anti-sexist attitudes is related to the visibility of this movement. Our findings suggest that while individuals who hold some progressive ideals may be open to understanding parallels with other dimensions of inequality, this does not occur automatically, but in response to social activism and debate.

The study discussed in this briefing paper is forthcoming in the American Sociological Review. We would like to recognize our co-authors Danny L. Lambouths III, Ronald Kwon, and Ronaldo Monasterio. We are also greatly appreciative to Stephanie Coontz for her vital feedback and encouragement on this briefing paper.